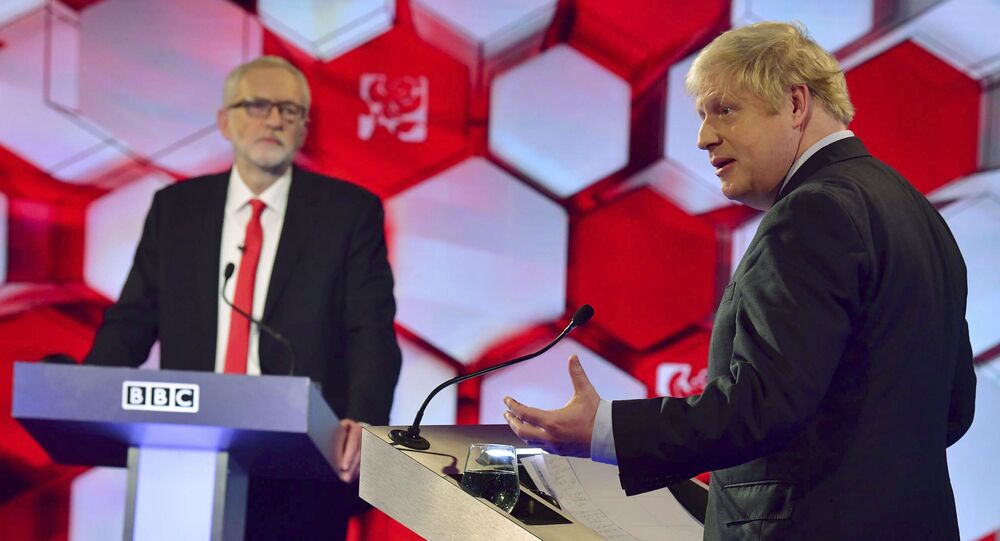 As the UK general election campaign draws to a close, opinion polls are beginning to show the race narrowing. Despite Prime Minister Boris Johnson being comfortably in the lead throughout most of November and early December, a hung parliament appears increasingly likely.

British Prime Minister Boris Johnson's lead over the opposition Labor Party has dropped from 15 percentage points to 12, just before the UK heads to the polls for the general election, according to an Opinium poll revealed on Wednesday.

​The poll, which measures voter intentions, shows the ruling Conservative Party falling to 45% from 46% compared with a previous poll on 7 December.

The opposition Labor Party shot up two points from the preceding week, while support for the Liberal Democrats fell by 1% from 13% to 12%.

Results reveal a universal trend across the polls showing a narrowing Tory lead. YouGov’s MRP also published on Tuesday showed a Conservative majority of 28 with 339 seats, down significantly from its previous findings in November which put the Conservatives at 359

Boris Johnson called the election in an attempt to bolster support for his Brexit withdrawal agreement and secure a majority in parliament.

During the campaign, the Labour Party has focused on the NHS, foreign policy, ending austerity and putting a final Brexit deal back to the public in a confirmatory vote.

While a Labour majority is unlikely, if the election results in another hung parliament, Labour could find itself in power as a minority government with support from other remain-supporting parties such as the SNP, the Greens and the Liberal Democrats.

In 2017, the Conservatives kicked off their campaign with a 20+ lead in the polls, but the final result saw the party lose its majority and resulted in a hung parliament and ultimately the resignation of Prime Minister Theresa May in June this year.

12 Seats to Watch: The Results to Keep an Eye Out for On UK General Election Night