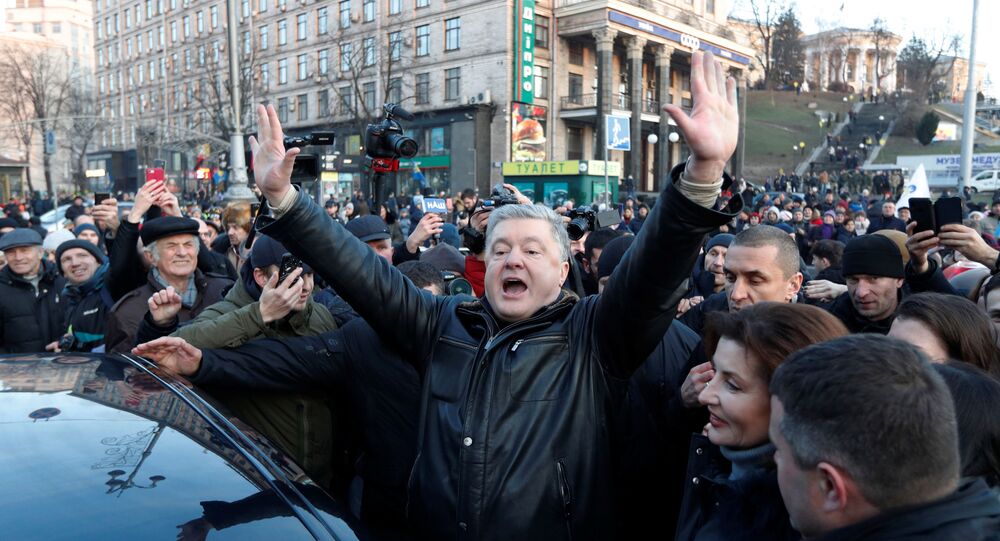 Ukrainian opposition parties were gathered in the capital city of Kiev on Sunday, to remind President Volodymyr Zelenskyy of the so-called red lines they have laid down ahead of the Normandy-type Paris summit slated for Monday.

Former President Petro Poroshenko was among opposition politicians and lawmakers gathered onstage to address the issue of Donbass in front of the crowd holding flags and banners of right-wing movements and Ukrainian WWII nationalist paramilitary groups.

But as the former Ukrainian president was ending his speech, shouting "Hail Ukraine!" into the microphone, a demonstrator hurled eggs at him. The poultry products did not hit their target, as revealed by video captured at the event. The man was detained for a "minor offense".

The nation's Interior Ministry said afterward that the rally with some 8,000 participants was peaceful.

The Normandy format was created in 2014 by Russia, Germany, France, and Ukraine, as a means of formulating a solution to the conflict, which have claimed over 10,000 lives.

The leaders of France, Germany, Russia and Ukraine will talk at a summit on 9 December about how to unblock peace process in Ukraine’s east. Main Ukrainian opposition parties told Zelenskyy that Ukraine’s unity was nonnegotiable after he promised more autonomy to the breakaway regions.

Kiev launched a military operation against the self-proclaimed republics of Donetsk and Luhansk five years ago after the two proclaimed independence from Ukraine, refusing to recognize a new central government spearheaded by Poroshenko. Zelensky has repeatedly asserted that peace in the distressed region is one of his primary goals. Zelensky also gave the impression that he would be willing to sacrifice his popularity to achieve the ultimate goal of reconciliation with the two breakaway republics.