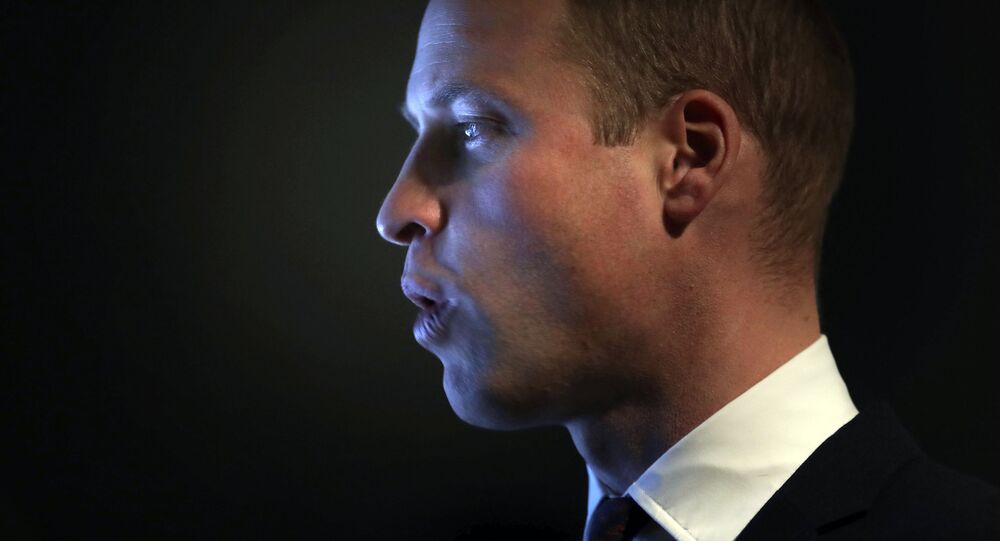 'Not Like They're All Tied to Epstein': Prince William Bashed for Alleged Talks With Hillary Clinton

Jeffrey Epstein’s July arrest on sex trafficking charges cast a shadow over many celebrities and influential people, who had to explain their ties with the convicted sex offender. Among them Prince William’s uncle, former US President Bill Clinton, and billionaire Bill Gates.

Netizens have bashed Prince William for meeting with former US Secretary of State Hillary Clinton and Microsoft co-founder Bill Gates, speculating that the trio could have met to discuss the fall-out from Jeffrey Epstein’s sex scandal rather than climate change.

Media outlets reported that the Duke of Cambridge, who previously campaigned for environmental causes, held talks with influential figures, including Clinton and Gates on how to tackle climate change. The royal allegedly plans to launch an environmental project next year and is trying to figure out how to better address the issue of global warming, the Daily Mail reported.

The details of the talks between the prince and former Secretary of State Hillary Clinton and billionaire Bill Gates remain unknown. Clinton is a vocal supporter of initiatives to fight climate change.

During her presidential campaign in 2016 she promised to put a lot of coal companies and coal miners out of business in order to stop global warming. Bill Gates and his wife Melissa have recently pledged $236 million to help farmers worldwide to adapt to climate change, which Gates called the biggest challenge the world faces right now.

Netizens, however, believe that the trio was more concerned with the Jeffrey Epstein sex scandal and their connection to the disgraced billionaire than environmental issues.

Why would 🇬🇧🤴🏻William ‘hold climate change talks w/Hillary Clinton
& Bill Gates? Both have Epstein problems, & The 🇬🇧 Royal Family is said@ to be distancing themselves fr that ... only to then go into talks w/them = Gates & Clinton = THAT Epstein Clique? https://t.co/lfy1nAe3Vd

Yeah Prince William, Hillary Clinton, and Bill Gates just had a meeting about climate change. Nothing else, I'm sure. Not like they all are tied to #Epstein

​One user said the royal should be ashamed of himself for meeting with Hillary Clinton.

I no longer have respect for Prince William for doing anything with the Criminal Clinton Cartel. I really thought he was smarter then that. He should be ashamed of himself.

The royal, the politician, and the tech revolutionary

Prince William’s uncle, the Duke of York faced enormous public pressure after Epstein was arrested in July on charges of running a sex trafficking network of minors. Particular focus was on Prince Andrew’s meeting with Epstein in 2010 after the financier was convicted of soliciting prostitution from a minor and was ordered to register as a sex offender.

The royal admitted it was a mistake to meet the billionaire at that time, but did not say he regretted befriending Epstein. The Duke of York himself  has been accused of misconduct by one of Epstein’s alleged sex slaves. Victoria Giuffre claims she was forced to have sex with the royal and was smuggled to London for that purpose. Prince Andrew and Buckingham Palace categorically deny the accusations.

Bill Clinton, former president of the United States and husband of Hillary Clinton, travelled on Epstein’s private jet dubbed the “Lolita Express“ and reportedly visited his private island. In an interview with New York magazine in 2002, Bill said via his spokesman that Epstein was “a highly successful financier and a committed philanthropist”. The president’s spokesman also said Clinton and Epstein hadn't spoken in over a decade and the president knew nothing about Epstein’s terrible crimes.

Epstein’s suicide in prison in August prompted numerous conspiracy theories that he was killed by his powerful friends, who do not want to be exposed or that the suicide was staged.

Bill Gates also had to explain his ties with the disgraced billionaire after news surfaced that he met with Epstein. In September, the Microsoft co-founder distanced himself from the convicted sex offender and said he didn’t have any business relationship or friendship with him.

However, The New York Times reported that the 64-year-old philanthropist met with Epstein in 2011 following his criminal conviction and even discussed a potential multimillion-dollar charitable fund. In November, Gates said that meeting Epstein was a mistake.

Gates is not the only tech visionary who had ties with Epstein. Amazon boss Jeff Bezos and Tesla CEO Elon Musk met with the disgraced billionaire at least once years after he was ordered by the court to register as a sex offender.