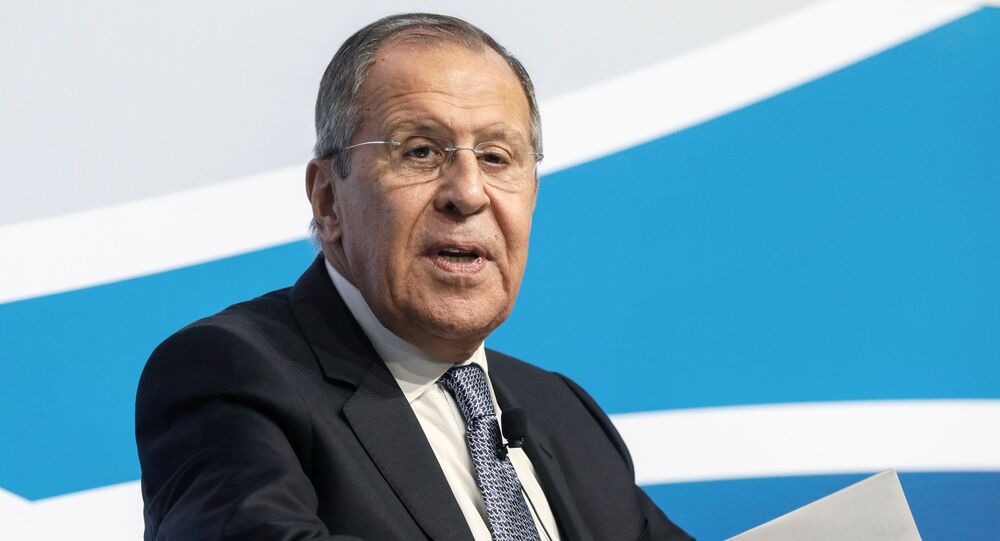 Russian FM Sergei Lavrov has held talks in Rome with his foreign counterparts and spoke at the annual “Mediterranean Dialogues” conference. At the meeting with Lavrov, Italy’s top diplomat, Luigi di Maio, brought up the issue of Moscow’s EU food embargo.

Early December is not the busiest time of year in the tourist centre of the Italian capital. But ministerial motorcades arriving at the five-star St.Regis hotel for bilateral meetings still attracted a lot of attention. It’s when the Italian Ministry of Foreign Affairs and the International Institute of Political Studies are holding their annual conference Mediterranean Dialogues (Rome MED) dedicated to issues for a “positive agenda” in the region.

​Lavrov’s talks with Italian Foreign Minister Luigi di Maio focused on war and peace in Libya, the situation in Syria, and bilateral issues. For Rome, one such issue is Russia’s embargo of EU foodstuffs, which was implemented by Moscow in response to the EU’s sanctions in 2014 and has affected Italy’s food manufacturing industry.

In his remarks at a news conference after the meeting with Lavrov, di Maio, who became the head of the country’s diplomacy in September this year, suddenly started talking about Italian cheese.

“I also explained to Sergei Lavrov the necessity to remove one sanction, which, in my opinion, does not fit the parameters, which were applied to European products. I’m talking about Parmigiano – a great product, which doesn’t fit the sanction parameters that affect our products. Parmesan, Parmigiano – is one of our most famous products”.

​While the “Parmigiano issue” doesn’t seem to be a big problem for Moscow, cheese is currently a huge topic in Italy’s domestic politics. Not only is the country’s food industry suffering from the Russian embargo, it could also take a massive hit from Brussels, if the EU decides to introduce a five-grade traffic light-style food nutritional labelling system that has already been tested in several European nations, including France and Germany. The system, which is called “Nutri-score” could place Italian delicacies, such as speck, olive oil, gorgonzola, prosciutto, Parmigiano Reggiano, and Pecorino Romano in the undesirable red category.

© REUTERS / KEVIN LAMARQUE
Macron Wants to Replace Donald Trump as Leader of the NATO Alliance - Professor
The country’s right-wing opposition party Lega led by former Deputy Prime Minister Matteo Salvini lost their majority after breaking up a coalition with the 5-Star Movement (led by Luigi di Maio) in August, but still has 33% approval ratings. While foreign minister di Maio was discussing the exceptional quality of Italian cheese at the talks with Russian diplomats, his political rival Salvini was defending Parmigiano and Pecorino Romano in a fight against the threat of Nutri-score becoming a European standard – a standard that he called “rubbish” for labeling Mediterranean products undesirable, while giving Coca Cola Zero a safe green tag.

Despite the presence of Italy's “cheese battles”, this year’s Mediterranean Dialogues conference, where Sergei Lavrov was addressing fellow diplomats, politicians, and journalists from all over the world, was focused on anything but nutritional standards. Syria and Libya are the two topics that are equally relevant for most EU and Mediterranean nations, which have been affected by the inflow of refugees from both regions for years.

Responding to accusations of Russian meddling in Libya, as well as the alleged presence of Russian mercenaries in the battlefield, Sergei Lavrov said that Moscow is in contact with all political forces in the war-torn country and slammed Washington, NATO, and related NGOs for spreading anti-Russian sentiment:

“When it comes to rumours, which are being spread by our American colleagues, it seems that when we talk about the Mediterranean, - take Syria for example, - look at how many official NATO soldiers are there. They were not invited by anyone and nobody asks questions why they are there, and whether they have the right to be there. But when something happens, Bellingcat and other non-governmental organisations will throw in the information that Russia is doing something wrong somewhere”.

The Syrian peace process was another big topic at this year’s MED in Rome. When Sergei Lavrov was asked about the pace of the Astana peace talks, and about the effectiveness of Syria’s Constitutional Committee, he mentioned his Friday talks with the UN Special Envoy on Syria Geir Pedersen, which were held on the sidelines of the conference, saying that “there are no panic moods” on Pedersen’s side when it comes to both issues.

​Mediterranean Dialogues was launched in 2015 as an effort to promote a positive agenda in regional and international politics. It focuses on shared prosperity, shared security, migration, civil society, and culture. Besides Sergei Lavrov, the conference is regularly attended by high-level officials from the EU, Turkey, Saudi Arabia, the US, Lebanon, the UAE, and Iran, as well as by journalists from all over the world.