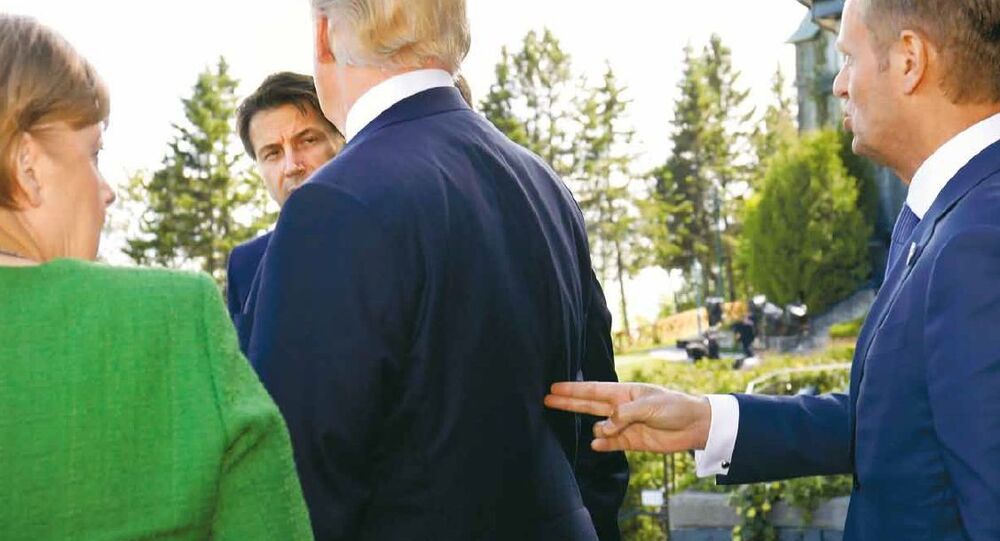 The trolling of US President Donald Trump by senior politicians is apparently continuing. Donald Tusk, former president of the EU Council, retweeted on Thursday a controversial photo from "his" unverified account one day after a group of heads of state were caught on video at recent NATO summit appearing to mock Trump.

Tusk, who is now heading the European People's Party (EPP) - Europe's largest transnational political party - is seen in a bizarre picture pointing with his two fingers a 'gun' gesture at Trump's back, signing the photo: “Despite seasonal turbulences, our transatlantic friendship must last”.

The comment may be in reference to the results of the 70th NATO summit held in London earlier this week, and highlighted by growing disagreements among the bloc's member states.

The picture, which, since posting it on unverified Donald Tusk's Twitter account, has been shared hundreds of times, was taken at last year's G7 meeting in Canada. Later in the day, Tusk retweeted this post from his official account.

Tusk and Trump were earlier embroiled indirectly, in heated debates over their differing views on the foreign policy of the European Union.

Most recently, Tusk used his September UN speech to castigate Trump's views as "false and dangerous" one month after calling Trump's desire for Russia to rejoin the G7 a "business calculation".

Trump has not yet tweeted back at Tusk's tweet. Earlier, the US president characterized Canadian Prime Minister Justin Trudeau as "two-faced" after the controversial video recording at London's NATO summit allegedly revealed top leaders mocking Trump.