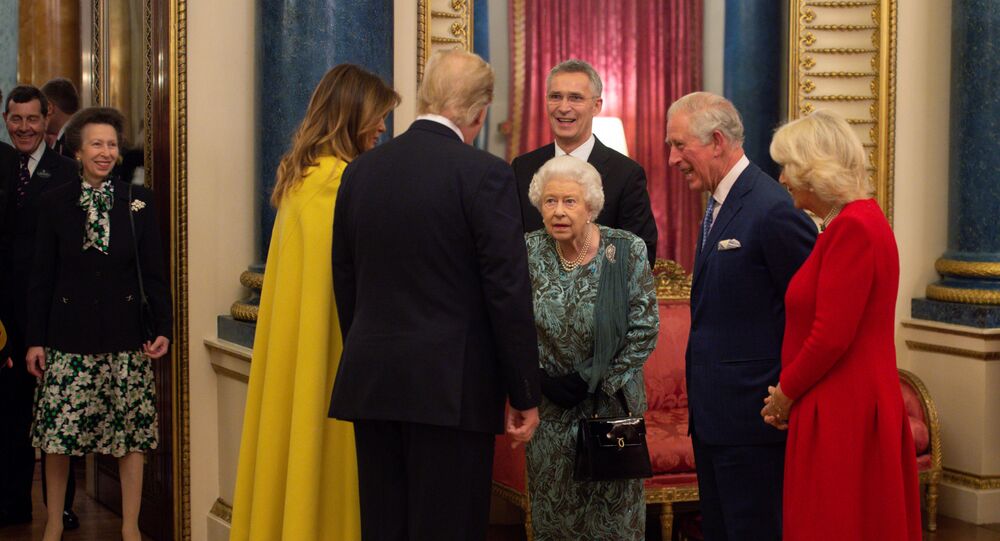 The Truth Behind ‘Anne, the Trump Snubber’ Viral Moment Revealed

An interaction between Queen Elizabeth II and her daughter Princess Anne that has sparked speculations of a silent argument was caught on camera as the monarch was greeting the Trumps and other NATO leaders during Tuesday's reception at Buckingham Palace; the video was subsequently shared and commented on in the social media.

A reporter on Wednesday claimed to have revealed the truth behind the viral moment between Queen Elizabeth II and Princess Anne, when the monarch appeared to scold her daughter for what was perceived by some as snubbing President Trump at Buckingham Palace.

“OK, here goes… Princess Anne: the truth. No, she didn’t snub the Trumps. And she wasn’t told off by the Queen,” tweeted UK Times journalist Valentine Low.

​Low said that the Queen, after greeting the president and first lady Melania Trump, turned to Princess Anne to see which dignitary she would be welcoming next.

“But there wasn’t anyone waiting: Trump was the last leader to be received by the Queen,” tweeted Low.

Instead the Queen, after greeting the Donald (and the Melania), turned to Anne to see who was next. But there wasn't anyone waiting: Trump was the last leader to be received by the Queen.
2/5

She continued: “Anne raised her hands in the air, laughed and said: “It’s just me,” adding a moment later “and this lot” as she pointed to the members of the household behind her.”

Anne raised her hands in the air, laughed and said: "It's just me," adding a moment later "and this lot" as she pointed to the members of the household behind her.
3/5

​Low said he was citing reporting by Laura Elston of the Press Association, who was at the event marking the 70th Anniversary of NATO.

This excellent bit of sleuthing comes from the very wonderful Laura Elston of the Press Association, who is as impartial a witness as you could hope for.
4/5

“So, the truth is now out there,” Low tweeted. “Not that anyone will pay any attention. Anne the Trump Snubber is a much better story.”

So, the truth is now out there. Not that anyone will pay any attention. Anne the Trump Snubber is a much better story.
5/5

Many Twitter users responded by commenting that they had also thought the Princess “wouldn’t embarrass her mother” like that.

Thought there would be more to it. Princess Anne wouldn’t embarrass her mother, regardless of who the guest is

Regardless of the formal or informal explanation, today we’re going to show Princess Anne some love for always being so Bold and Beautiful in Her own way. That’s just how it is.🤷🏽‍♀️

Thanks for that explanation! The Queen has been through a lot lately. It’s a shame the press turned an enduring moment with her daughter into something that suited their own selfish needs for click bait and to hate on a U.S. President. Not many do the right thing like she does.

Other netizens were still left wondering.

Did Princess Anne shake Trump’s hand or not? That’s the question.

Well, of course, but it was lovely to imagine, just for moments...

Some posted sarcastic comments regarding the press and their “hunt for the truth”.

The media make it up as they go along - outrageous!

So the press can hunt and recognise Truth. The world is shocked and shooked!!

​Earlier, footage of the exchange had generated a flurry of speculations among royal watchers, as many seemed convinced the Queen was reprimanding her daughter for failing to greet Trump.

The Queen chastising Princess Anne for not greeting Trump and Anne not giving a single shit is the mood we all need to take into today pic.twitter.com/W5cCFlq2Ui

​The video footage showed the 93-year-old Queen greeting the US President Donald Trump and his wife, Melania, alongside her eldest son, heir to the throne Prince Charles, and his wife, Camilla.

After a brief chat, the monarch looked over pointedly at her daughter, Princess Anne, 69, standing at the doorway.
The Princess appeared to shrug and laugh.

As the footage went viral, many netizens commented on what they perceived to be Princess Anne side-eyeing the Trumps.

Princess Anne is like “ I turned up mum, what more do you want from me ?!” 😅 love Princess Anne ! The shade is reaaaal 🤣

Was the Queen Bothered by Princess Anne for 'Failure' to Greet the Trumps?