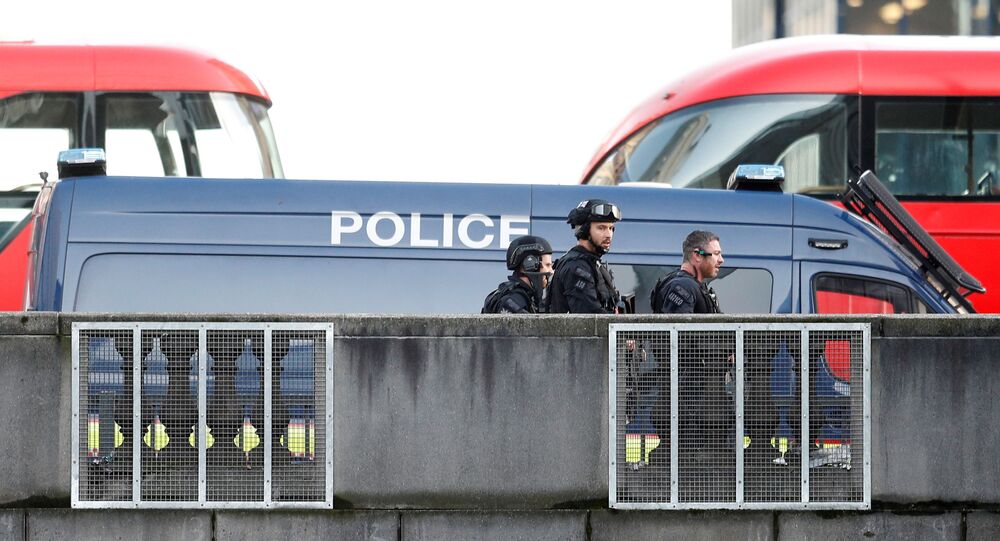 Despite being deemed as a public threat, London Bridge knifeman Usman Khan was freed ahead of his scheduled release under strict conditions, and required to wear a GPS tag. This, however, didn’t prevent him from going on a rampage inside Fishmongers’ Hall, which at the time was hosting a rehab conference he had been permitted to attend.

Nazam Hussain, an associate of the London Bridge attacker, was arrested over the weekend as security agencies embarked on an operation to prevent potential copycat assaults.

The 34-year-old was detained in a police raid targeting his home in Stoke-on-Trent, central England, on Saturday on suspicion of getting things ready for new terrorist acts.

He was jailed in 2012 alongside Usman Khan, who stabbed to death two people and injured three in London on Friday before being shot dead by police officers. At the time, several other suspects were also arrested over a plot to bomb facilities across Britain.

Six of the nine members of the suspected gang were released on parole long before their prison sentences expired, allowed to be back on the streets under certain conditions determined by a court.

Hussain is supposed to have been Khan’s close friend, although police said there was no information linking him to the London Bridge attack.

© REUTERS / LUKE POULTON
The scene on London Bridge in the aftermath of a reported shooting, in London, Britain, November 29, 2019 in this still image obtained from a social media video.

Whitehall sources cited by The Times noted there was “very likely to be increased scrutiny of these men", not specifying though the exact measure due to be taken.

In another precedent connected with Khan’s network, a different member of the cell, freed along with the others, Mohibur Rahman, has been jailed for life after MI5 uncovered his role in a new terrorist murder plot.

Despite being viewed as posing a danger to public security, Khan was released on parole in December 2018, and placed on the highest level of public protection. He was required to wear a GPS monitoring tag and ask for formal permission from the police to attend events. In particular, his visit to the London rehabilitation  conference on Friday, where the rampage started, had also been okayed by authorities, so he seized the chance, with the horrid act intended to end in his “martyrdom".

As the investigation into the killings proceeds, it has been revealed that the first victim was 25-year-old Jack Merritt, who was involved with Cambridge University’s Learning Together programme for former inmates. The second one was named Saskia Jones, aged 23, a criminology graduate who reportedly had ambitions to join the police force as she planned to enroll in a post-graduate programme, “wishing to specialise in victim support”.

She is known to have produced an academic work exploring how the police had “failed and continue to fail to protect victims of sexual violence”.

The early assessment is that Khan was acting alone and wore a hoax suicide bomb vest because he wanted to be shot.

In 2012, Khan, then aged 20, pleaded guilty to a plan to create a training camp in Kashmir for young British Islamists, who were supposedly intended to be dispatched back to the UK equipped to carry out terrorist attacks.

The group had links to the radical preacher Anjem Choudary and was inspired by the Yemeni-American preacher Anwar al-Awlaki and his al-Qaeda in the Arabian Peninsula group, The Times specified. Khan was also charged with plotting a 2012 attack on the London Stock Exchange, Big Ben, and Westminster Abbey, and is said to have been planning to target then mayor Boris Johnson.

Amid ongoing political campaigns for the 12 December vote, Prime Minister Boris Johnson ordered a review of criminal cases for 74 convicted terrorists released on licence over suspicions of their posing a threat to citizens’ security.

He blamed the last Labour government for the “repulsive” early release of terorrists, vowing to introduce a minimum 14-year prison term for them, with no possibility of milder sentences. Labour struck back at spending cuts introduced by the Tories, saying proper (including physical) surveillance could not be covered with the sums allotted for this by the government.