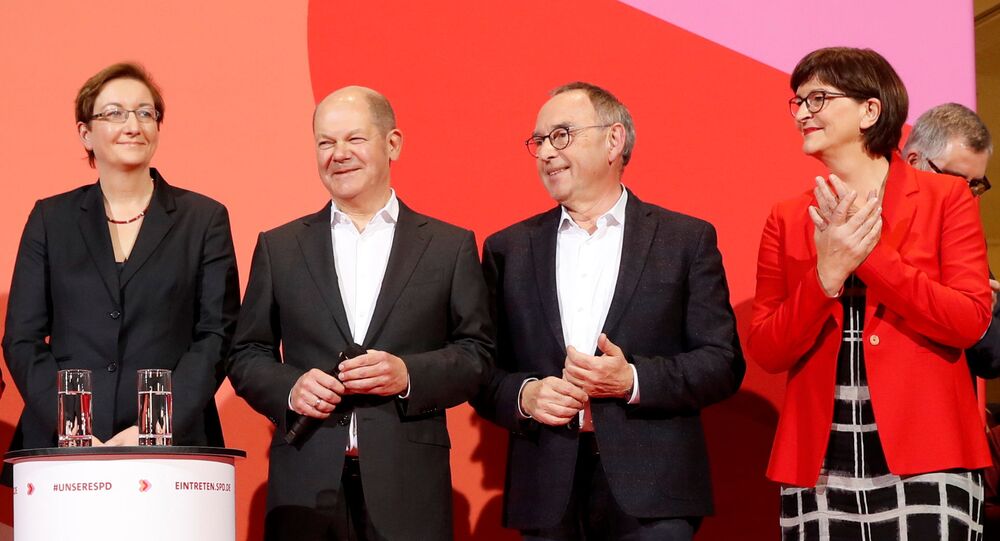 MOSCOW (Sputnik) - German economist Norbert Walter-Borjans and his running mate, lawmaker Saskia Esken, on 30 November won the contest to lead the Social Democratic Party, the results of the ballot showed.

The ticket of Walter-Borjans, who served as finance minister in the state of North Rhine-Westphalia, won support from 53.06 percent of party members during a live event in Berlin.

German Finance Minister Olaf Scholz and Klara Geywitz, a former state legislator in the Brandenburg parliament, came second with 45.33 percent, in what was the second round of voting.

Nord Stream 2
Bundestag Passes Bill Regulating Application of EU Gas Doctrine to Nord Stream 2
This is expected to deal a blow to the governing coalition of Chancellor Angela Merkel’s Christian Democrats as Walter-Borjans has been highly critical of the 2018 coalition agreement, which he proposed to renegotiate.

The newly elected co-leaders of Germany’s Social Democratic Party indicated on Saturday that they would not immediately end the coalition with Chancellor Angela Merkel’s conservatives.

"We have always said that it is not just about choosing whether to leave immediately or stay in for a long term. We definitely said it was about the content. We said we needed to do more about the climate," Norbert Walter-Borjans told Pheonix television

His running mate, Saskia Esken, admitted that no one in the party was a fan of the "grand coalition" with Merkel's Christian Democrats, but they needed to respect those members who voted for the pro-coalition tandem.

Esken said next week’s party congress would provide more clarity about what SPD planned to do next.

The 27 October state elections saw the Christian Democratic Union (CDU) drop to the third place behind Alternative for Germany (AfD), which won almost a quarter of all votes.