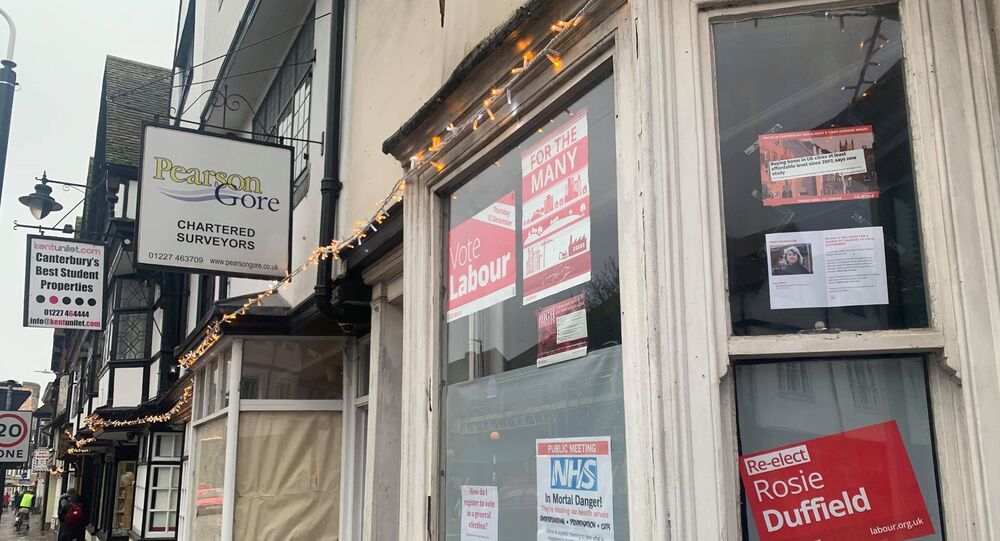 Election: Labour and Lib Dems Battle For the Heart of Remain in Canterbury

The 2017 general election saw a red island emerge in the south of England's blue sea after a shock wave of support in the constituency of Canterbury, Kent and the election of Labour MP Rosie Duffield. The gain was something even the Blair landslide victory in 1997 was unable to accomplish.

Labour canvassers have been a constant presence in Canterbury since the shock election victory in the seat in 2017. Shouts of "Vote Labour!" and the sight of red rosettes are a frequent staple of its main street as local supporters hope to "keep Canterbury red" at the general election on 12 December.

The city has a flourishing arts and music scene, energised by its growing student and increasingly diverse population. But it also has a number of dilapidated social housing blocs spread across the city, which Labour aims to target this year.

Canterbury has also become increasingly student dominated in recent years, boasting a population of almost 40,000 students, a change which has been credited with the 20% swing in the Labour vote and the removal of the former Tory MP, Sir Julian Brazier.

A poll conducted by YouthSight  revealed that student support for Labour more than trebled between 2010-2017, securing 68% of student support across the country, a trend which ultimately ended an unbroken reign of Conservative MPs that held the seat since its formation.

One point of concern for the incumbent Labour Party MP is that despite her win in 2017, Labour only holds on to the constituency by a tiny 187 majority, among the most marginal in the country.

As a staunch supporter of remain and a new referendum on Brexit, Duffield has become a popular local figure among her own party and pro-EU voters across the constituency.

Great team not all in this photo out canvassing on Hales estate today - loads of support and more and more young people and students registering to vote for @RosieDuffield1 @Labour4C #ReelectRosieDuffield #Canterbury pic.twitter.com/fSqwXgLM6f

​Signs on the ground certainly indicate strong support for Labour especially among the student population as pro-Corbyn and Duffield posters can be seen decorating shop windows, canvassers on the main street a frequent sight, and prolific petitioning for the party on the university campus.

However, the Conservatives are attempting to capitalise on the potential to retake the seat.

24-year old Sean Connolly, who is studying for a PhD in chemistry at the University of Kent, said he will be voting Labour in the December general election.

Representing the student underbelly which brought Duffield to power in the traditionally Tory seat, he explained his generations substantial interest in the Labour message.

"The policies and ideas put forward by the Labour Party gel the way I think the country should be run as opposed to the Tories or anyone else. Needs first over money, is the key point", he stressed.

Sean said that he regrets not voting in the European Union referendum and that the leave vote brought about an unnecessary divide which is "continuing now".

When asked if he thinks there should be a remain pact across the country, where Liberal Democrats and Labour MPs agree stand down for the respective pro-EU candidate to defeat the Tories, he rejected the idea.

"I don't think so. We should be supporting what we want to see put through parliament, not just focus on getting the Tories out".

Offering a glimpse into the feeling among the local electorate, Sean said he believes Labour can hold on to the seat.

"Considering how we swayed it in the last election, there's only gonna be more students registered this year based on how much more of a push there is on campus to get people registered to vote and the majority of it is Labour".

Connolly's comments do reflect a broader national trend, with over 1.5 million young people registering to vote in recent weeks, according to a government live tracker on voter registration.

More than half a million people registered to vote in the last 3 days - 308,000 on one day alone. Don't lose the right to have your say - no vote, no voice.
You have one day left - get registered. It takes 5 minutes, and it could change your life #GE2019 https://t.co/oEJL8azuxh pic.twitter.com/x3Zl0kVpfJ

​Ben Hickman, a local Labour party chairman told KMTV in October that he expects Duffield to hold on to the seat despite a potential low turn out due to weather and seasonal priorities.

“I don’t think that we will have any problems getting students out [to vote]. I think we can win in Canterbury comfortably. Students are important but when you have a majority that small, I think everyone is important. We can win without students...I think there are enough here to win Canterbury again", he said.

The local Labour Party's presence and organisation is far more prolific than in previous elections, which saw growing swings away from the conservatives to the opposition. Canvassers have ruled out any restrictions to their campaign, demonstrating in the City Square as well as the peripheral towns.

Even in 2015, when Labour suffered a landslide defeat, Canterbury saw the largest swing towards the party of any seat in the south-east of England with an 8.4% increase, indicating that the Corbyn surge was not the only factor at play which led to the victory in 2017.

Can The Tories Strike Back?

As well as edging in a Labour victory, Canterbury nominally voted to remain with just 54.67%. While this may appear to be good news for Labour, with the Conservatives staunchly pinning their party line to Brexit, this remain-voting city is at risk of seeing the Tories retake the seat.

Coupled with what has been criticised as indecision over Brexit on the part of the Labour leadership due to its position of staying neutral in a second referendum and historical Euroscepticism, the campaign of the Liberal Democrats as the party of revoking Brexit altogether could see the remainer vote divided, allowing the Conservative hopeful, Anna Firth, to reclaim the seat.

The reality is so stark that even the Liberal Democrat candidates appear to be aware of it, seeing their initial parliamentary hopeful Tim Walker, a journalist and remain campaigner, step down from the race in order to avoid splitting the vote and giving the remain supporting Duffield an uncontested shot at the remain vote.

The Liberal Democrats insist that a "remain alliance" cannot be unilateral and that Labour MPs should stand down to allow for a Liberal Democrat win in other marginal constituencies such as Richmond Park, as Paula Ferguson explained on BBCs Newsnight earlier this month.

This opinion has even been echoed by Duffield herself, who last week said to Business Insider that she was "frustrated" that the Labour Party was not considering forming an electoral pact with the Liberal Democrats and other remain opposition parties across the country.

"It's a real shame that we didn't get around the table, especially after what happened at the snap election last time. We should have been a bit more prepared to at least talk about alliances."

The Lib Dems claim that attempts by the party to offer Labour the chance the work together were rejected earlier this year. Jo Swinson is currently working with the Greens and Wales' Plaid Cymru in an electoral deal in 60 seats nation-wide. While Labour is determined to contest every seat.

Remainers across party lines, including Conservatives, have pledged to support the Labour candidate in a bid to keep a remain supporting MP in Parliament.

​Canterbury constituency chairman Nigel Whitburn confirmed that while there was no electoral pact between Labour and Lib Dem, the campaign would be "proportional" to the importance and expectations of each seat.

When asked if the Liberal Democrats standing a candidate against Labour runs the risk of splitting the vote and allowing a Brexit supporting MP into the seat he said:

"Not at all. In fact quite the opposite. The Liberal Democrats provide a home for people who might vote Tory but want to remain in the EU. Soft Conservatives or liberals who would never vote for Labour run by Jeremy Corbyn and Len Mccluskey can hold their nose and vote for us."

The Brexit factor has introduced complications to an already uncertain election. A unified leave side may have the advantage and ultimately take remain areas due to a split vote among competing second referendum supporting parties.

Nigel Farage's Brexit Party has already agreed not to contest Tory-held seats in an attempt not to split the vote and allow remain MPs into power, such as happened in the Peterborough by-election in June.

Seats like Canterbury will determine whether Prime Minister Boris Johnson can secure a majority or if remain sentiment materialises into votes in such a way that the 2019 December election could mirror Theresa May's failed gamble to wipe out the opposition in 2017.