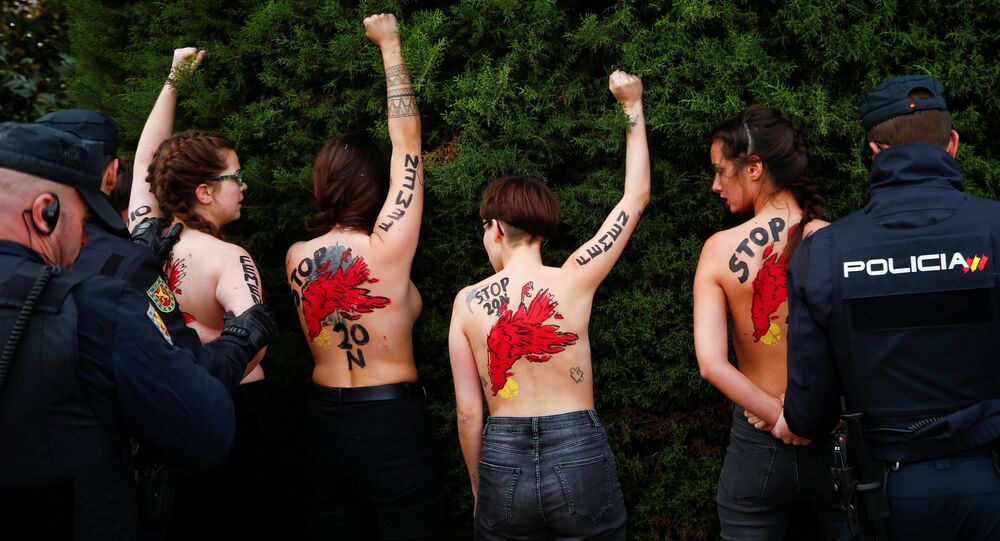 The march which the female activists were trying to disrupt was held in protest against Franco’s exhumation and Spain’s historical memory law.

A group of topless female activists belonging to the FEMEN movement has attempted to interrupt a rally held by the supporters of the late Spanish dictator Francisco Franco held on the 44th anniversary of his death in Madrid.

The activists, who had "To fascism neither honour no glory" painted on their bare chests and who were chanting the same slogan, burst into the demonstration as it reached Plaza de Oriente, but were quickly apprehended by police and then removed from the vicinity of the gathering.

The march the FEMEN protestors were trying to disrupt is an annual gathering held around 20 November to commemorate Franco’s death.

Jesus Munoz, leader of Spain's Falange party, explained that this year’s rally was held against Franco’s exhumation, which took place in October, as well as against the country’s historical memory law which recognises the people who suffered during the dictator’s reign.

"Now they start desecrating tombs, this is not going to be like 1936 (when the Spanish Civil War started) but much worse," he complained.