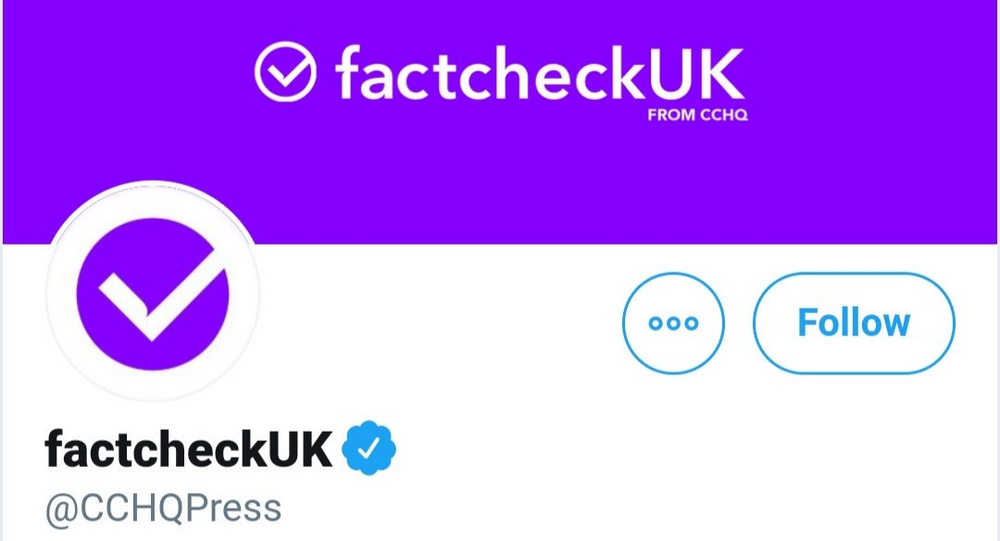 As Boris Johnson and Jeremy Corbyn clashed in the first debate ahead of the December general election, the Conservatives press office’s Twitter account was renamed to “factcheckUK”.

Twitter and the Labour Party have both accused the Conservatives of misleading the public after it underwent a brief rebranding during Wednesday’s live TV election debate.

The Conservative Party’s press office last night renamed its Twitter page, followed by more than 76,000 users, to “factcheckUK” and switched the avatar to a white tick against a purple background. The handle "CCHQPress" remained intact.

The account's description was changed to “fact-checking Labour from CCHQ”; during the debate, it posted a number of pro-Tory statements prefaced with the word “FACT.” All changes were reverted shortly after the debate ended.

Twitter itself later criticised the stunt, saying it was against the rules that “prohibit behaviour that can mislead people, including those with verified accounts.” The platform threatened to take “decisive corrective action” if a similar stunt happens again.

Labour MP David Lammy called on the Electoral Commission to investigate the renaming and accused the Tories of trying to “con the public.”

The Conservative Party press office @CCHQPress rebranding themselves as "FactCheckUK" shows what disdain this party and this government has for the truth.

The Electoral Commission must investigate and punish this blatant attempt to decieve the public. #LeadersDebate #ITVDebate pic.twitter.com/3EWoy636Gl

The UK fact-checking charity Full Fact, in turn, has described the change as “inappropriate and misleading.”

When quizzed over the rebranding on BBC Breakfast this morning, Foreign Secretary Dominic Raab said “no one gives a toss about the social media cut and thrust – what they care about is the substance of issues.”

He explained that the account was renamed to “make it clear that we’re holding Labour to account for the nonsense that they systematically and serially put out in relation to the Conservatives.”

Raab denied that the move was misleading and insisted that “no one for a split second would have been fooled” by it.

Plenty of people have still flocked to Twitter to express their outrage; some said they've flagged the account.

For non-Brit friends: Last night, Britain’s governing party doctored its Twitter account to deceive people into thinking it was a fact-checking service, then used it to send out partisan spin. They did it because they know they’ll get away with it. #FactCheckuk #r4today pic.twitter.com/ZmdmrJ7pjX

I've just reported this blue tick Tory press account to Twitter for being fake. I'd urge others to do the same. #FactcheckUK? Dirty tricks from a dirty party. #FactsMatter pic.twitter.com/DQUIz0sP10

RIP factcheckUK.
A dumb stunt that may not have gone how they hoped it would. pic.twitter.com/FUPPC0hxYx

When trust in politicians is at an all-time low, CCHQ are demonstrating complete contempt and are behaving in a brazenly underhand way.