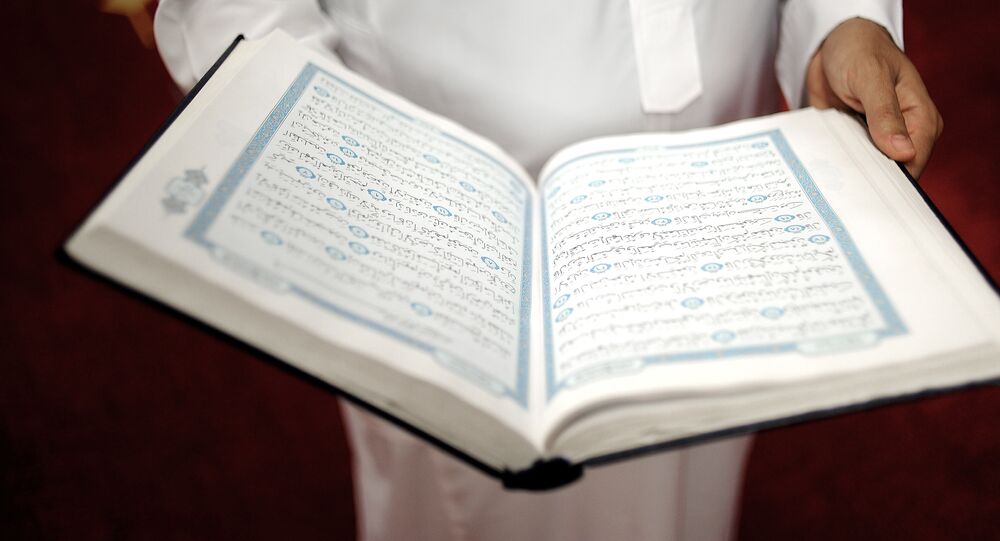 The supervised protests, during which members of a local anti-Islamic organisation slammed Islam as a religion of violence and labelling the Prophet Muhammad a “paedophile”, culminated in the central religious text of Islam being burnt, likely for the first time in Norway.

Muslim leaders in Agder, Norway, have announced plans to file a police report after the Quran burning that occurred during a demonstration on Saturday.

The Muslim community sees this action not only as illegal but also as a “hate crime”, Akmal Ali, the leader of the Muslim Union of Agder said, according to ABC Nyheter.

He referred to a demonstration by Stop Islamisation of Norway (SIAN) in Kristiansand this past Saturday, when two copies of the Quran were thrown into a garbage bin, and another set alight by the organisation's leader Lars Thorsen.

​During the event, which was supervised by over a dozen of policemen, SIAN members slammed Islam as “fascist” and a religion of violence, labelling Prophet Muhammad as a “paedophile”, the news outlet Resett reported.

Coupled with the subsequent desecration of the Qur'an, this stirred considerable rage among SIAN opponents and Muslims, who gathered for a counter-demonstration. Some eventually managed to sneak past the police barriers and attacked Thorsen.

​While the demonstration was allowed by the police, SIAN received no permit to burn the Quran, which is why the police promptly interfered to terminate the event.

“Such actions are controversial. There is strong engagement. And that is why we did not allow open fire,” Agder Police Chief Morten Sjustøl told ABC Nyheter.

During the skirmish, photographer Lena Anderassen was attacked and kicked in the back.

​Resett suggested that this may have been the first public burning of the Quran in Norway and definitely the first one SIAN has ever attempted.

“We must focus on the politicians' betrayal against us and against the Muslims,” Lars Thorsen said, explaining his stance to Resett upon his release.

By his own admission, there are different opinions within SIAN on whether or not it is appropriate to burn the Quran. Still, reruns of this event cannot be ruled out, he said.

“It turns out to be a good way to visualise the negative power that is in Islam,” Thorsen explained.

The Quran burning was later condemned by Turkey.

Stop Islamisation of Norway (SIAN) dates back to the early 2000s. Its stated goal is counter the proliferation of Islam, which it views as a totalitarian political ideology that violates the Norwegian Constitution as well as democratic and human values.

Norway's Muslim community has grown exponentially over the past few decades and is now estimated to constitute 5.7 percent of the country's population of 5.2 million, accounting for well over 10 percent or higher in some municipalities.

Quran burnings are a staple of the right-wing Danish Party Stram Kurs ("Hard line"), whose leader Rasmus Paludan celebrates it as a token of free speech.