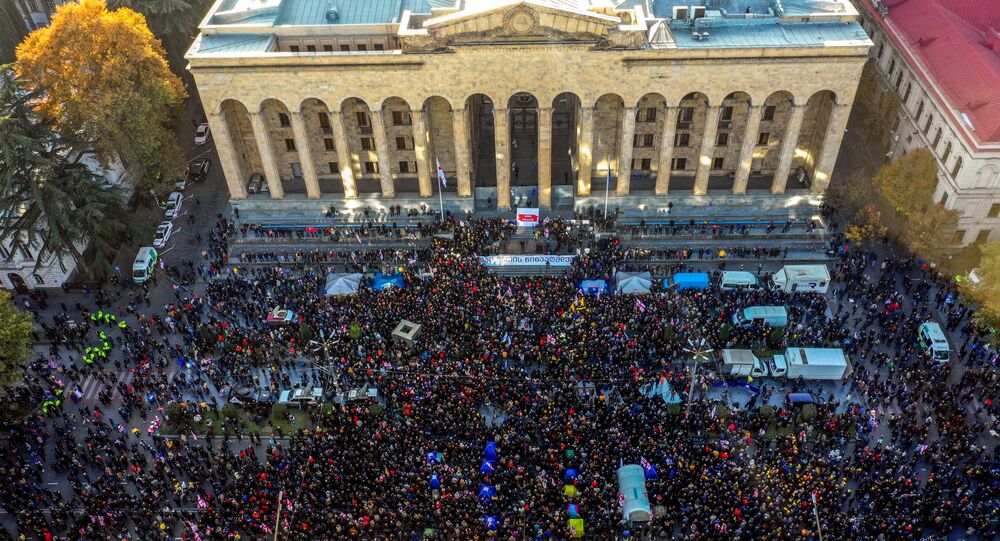 TBILISI (Sputnik) The Georgian Interior Ministry said that 18 people have been detained during the dispersal of a protest rally outside the parliament building in Tbilisi.

"During the rally in front of parliament, 18 people were detained for administrative offences. These persons were detained under articles 173 (disobedience to the police) and 166 (disorderly conduct)," the ministry said in a statement.

It also said that all entrances to the parliament buildings have been unblocked, allowing the legislature to work without problems.

Riot police officers had to use a water cannon to disperse protesters who had been blocking the entrances to the Georgian parliament building.

Earlier in the day, Rustavi 2 broadcaster reported that Georgia's Patrol Police Department started dismantling the tents that opposition supporters had set up near the parliament building in Tbilisi and transferring them to the pavement.

The opposition supporters prevented lawmakers from entering the parliament, blocking access to all entrances. The Interior Ministry called on them to obey with the requirements of the police and to stop rallying, noting that otherwise measures will be taken.

Protesters are calling for convening early parliamentary elections and appointing an interim government, even though the ruling Georgian Dream party has already said that the early elections are out of question, and the vote will be held next October, as scheduled.

On Sunday, thousands of supporters of the opposition and of non-governmental and civic organizations rallied in front of the parliament.