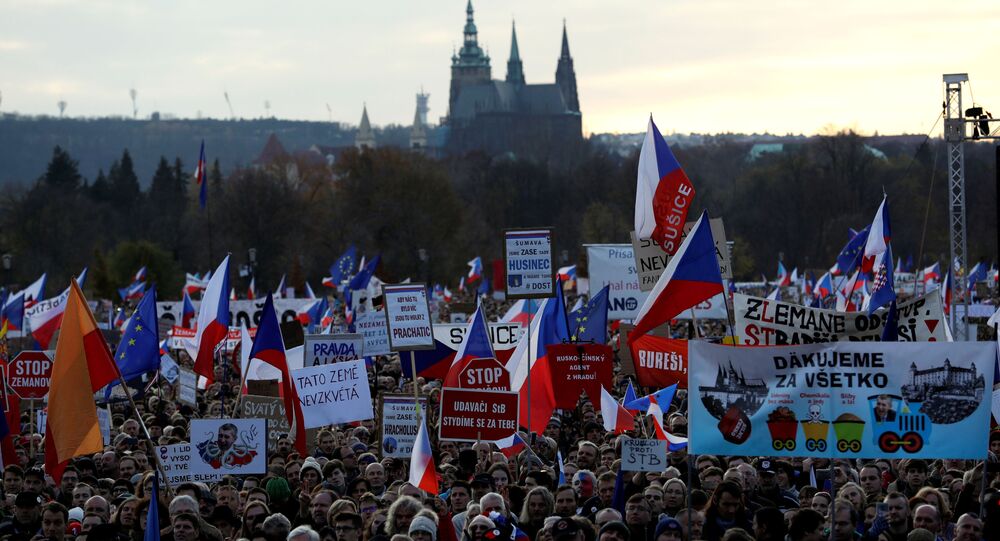 PRAGUE (Sputnik) - The protesters are gathering in Prague's Letna Park on Saturday to demand the country's prime minister Andrej Babis either to resign or to give up his multi-billion business assets.

According to police, about 200,000 people are participating in the rally. People keep coming from all over the republic, according to live broadcast of leading country's channels. However, Czech media outlets suggest that about 300,000 have taken to streets protesting against the prime minister.

"Our rally is against the conflict of interests of the businessman and prime minister Babis. He should either get rid of his Agrofert [agricultural] holding and media groups belonging to him or resign from the post of the prime minister", Mikulas Minar, the event's organizer and the leader of the social movement Million Moments for Democracy, told reporters.

​This rally coincides with the start of the celebrations dedicated to the 30th anniversary of the "velvet revolution" in the republic, which ended the rule of the Communist Party.

The anti-Babis protest in Prague has drawn a huge crowd #Letna pic.twitter.com/HAlakS7JYj

​The organisers recall that the court in Slovakia, where Babis came from, did not drop charges against him over cooperation with the communist intelligence.

​In turn, Babis noted he was puzzled about the rally's goals.

"We have freedom and democracy, everyone can participate in demonstrations and rallies — whoever wants, where they want and against whom they want. But I really do not understand the motives for holding this rally. It seems to me that the organisers intend to simply take advantage of the atmosphere of the 30th anniversary of the events of November 1989", the prime minister said, adding that these days people should gather for celebrations, and not for rallies.

This year, the prime minister refused the traditional laying of flowers on 17 November at the monument on National Avenue in Prague, where in 1989 the police brutally beat participants of a peaceful student demonstration, after which the turbulent events of the "velvet revolution" began. A year ago, one of the participants of the memorial event threw the flowers laid by Babis into a rubbish bin.