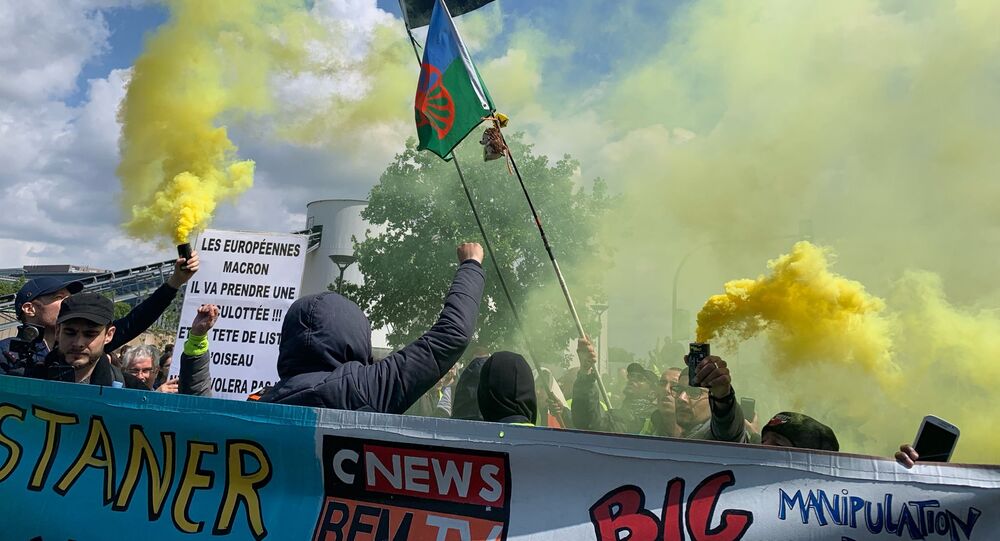 PARIS (Sputnik) - More than 20 subway and express train (RER) stations were shut down in Paris on Saturday morning in the run-up to protests as the yellow vests movement marks its first anniversary this weekend.

"On Saturday, November 16, by order of the police prefecture, starting from 7:00 a.m. [6:00 GMT], some stations/transport hubs are closed to the public in the run-up to numerous demonstrations in public places", public transport company RATP said in a statement.

The stations near the Champs-Elysees, a traditional venue for protests, will be closed. Stations near the Eiffel Tower, the Place de la Concorde and the National Assembly will also be shut down, while train service on metro lines 2 and 6 will be completely suspended.

In addition, over 50 bus routes will also be affected; the routes will either be shortened or changed to avoid blocked streets.

© AP Photo / Bob Edme
Demonstrators hold upside down portraits of French President Emmanuel Macron during a protest through the streets of Bayonne, France Sunday, Aug. 25, 2019. Critics of French President Emmanuel Macron are marching near the G-7 summit he is hosting to demand he do more to protect French workers and the planet. A melange of activists, some wearing yellow vests, carried portraits of Macron as they marched Sunday through the southwest city of Bayonne. Some held the portraits upside down.

The planned time for the resumption of transport services has not been reported.

The wave of Yellow Vests rallies started in France on 17 November 2018. The protests were initially triggered by the government's intention to increase fuel taxes.

Even though the authorities abandoned their initial plan and introduced a set of measures to improve the socio-economic situation, protesters continue to take to the streets across France every weekend to express their wider discontent with the government's policies.