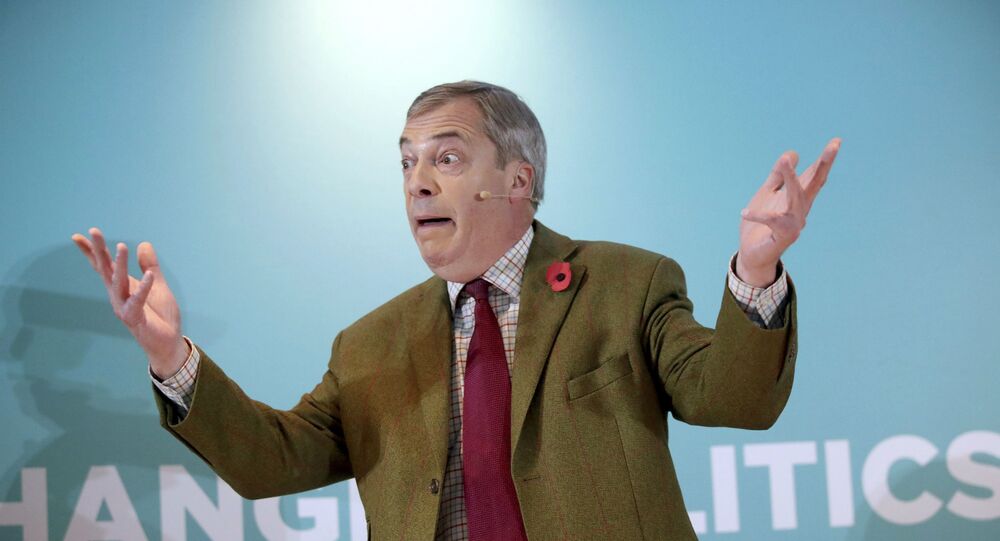 The indignant comments come as both parties' candidate lists were finally announced with polling day now less than four weeks away.

Brexit Party leader Farage has accused the Tories of “dirty tricks”, going as far as threatening to call the police as at least eight of his Brexit Party hopefuls were reportedly offered peerages and top positions in exchange for their last-minute withdrawal from the upcoming election.

“Even Boris Johnson’s [chief of staff] Sir Edward Lister is calling our candidates...The system is corrupt and broken”, Farage fumed in a tweet.

Ann Widdecombe, the party’s candidate in Plymouth Sutton, confirmed she’s received two phone calls from No. 10 urging her to quit.

Widdecombe said she had indeed had phone calls from former Tory ministers, remarking though no promotions were offered:

No. 10 vehemently denied any incentives had been offered.

On Monday, Nigel Farage announced that he would not be fielding candidates in 317 seats where the Conservatives are favoured to win, so as not to split the 12 December vote results.

He argued his decision to stand down his party hopefuls would have a positive effect for Brexit as it would prevent a second referendum from taking place.

A second referendum, otherwise known as a “people's vote” had earlier been proposed as an instrument to break the domestic deadlock in Parliament over its perpetual failure to agree upon a Brexit deal, as well as approve a snap vote, which Johnson had proposed three times before finally receiving approval.

Farage had initially promised to field 600 candidates but claimed the reason for the change of heart was because Boris Johnson had committed to signing a trade deal with the EU that would stipulate "no regulatory alignment”, like the one Canada has with Brussels.

Farage praised the specifics of the deal as a "huge change" in the Conservatives' approach to Brexit, claiming at the same time that what Johnson is doing is “no Brexit”.
For the time being, the UK is set divorce the EU by 31 January, with Johnson vowing to make good on his promise to have his bill, negotiated with Brussels, ratified as soon as possible.