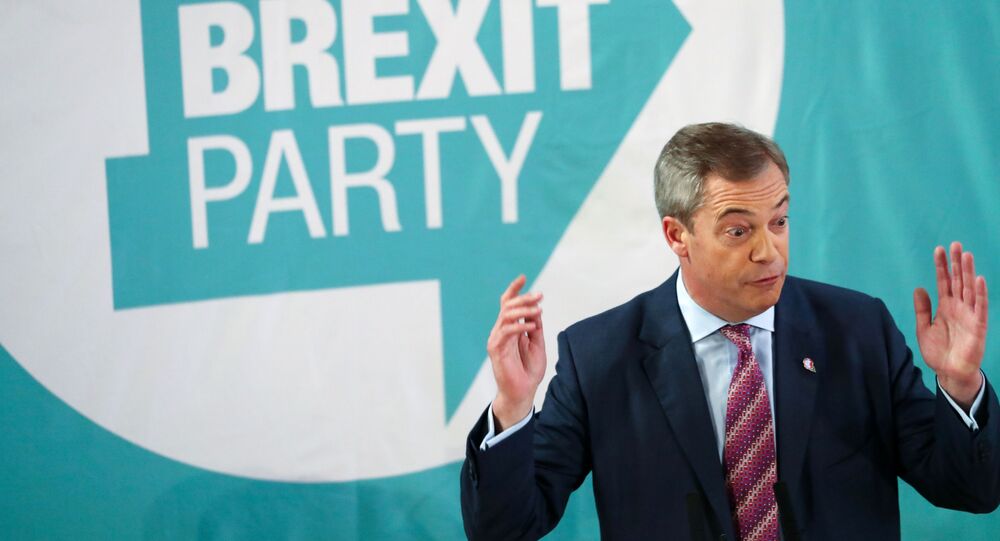 On Monday, Nigel Farage announced that he would not be fielding candidates in 317 seats where the Conservatives are the favourites to prevail in the 12 December UK general election.

In a column published in The Telegraph on Monday, Brexit Party leader Nigel Farage claimed that his decision to stand down his party candidates would prevent a second referendum from taking place.

A second referendum, also known as a “people's vote” is a referendum on the Brexit withdrawal agreement, which was earlier proposed as an instrument to break the deadlock in Parliament over its failure to agree a Brexit deal.

“I believe The Brexit Party’s general election strategy of not contesting the 317 seats won by the Conservatives in 2017 will put Britain on the best possible course for future success. It should also kill off the idea of a second referendum,” Farage claimed.

While insisting that Prime Minister Boris Johnson's Brexit deal “was not Brexit”, Farage praised Johnson for putting out a video in which he promised not to extend the transition period beyond the end of 2020.

“This represents a direct challenge to [EU chief negotiator for Brexit] Michel Barnier, requiring a change to the political declaration before parliamentary ratification,”  Farage said, also citing Jonson as saying that he would negotiate a Super Canada Plus trade deal with no political alignment.

“This is a huge change. Since [former UK Prime Minister] Theresa May’s 2017 Florence speech, the UK has pursued the anti-Brexit policy of a close and special partnership with the EU by remaining part of many of its agencies. Mr Johnson has promised something quite different. I have no great love for the Tories, but I can see that by giving Mr Johnson half a chance we will prevent a second referendum,” Farage argued.

The remarks come after he announced on Monday that the Brexit Party will not contest the 317 seats the Tories won at the last general election.

The Brexit Party will instead focus on “all the seats that are held by the Labour party, who have completely broken their manifesto pledge in 2017 to respect the result of the referendum, and we will also take on the rest of the remainer parties. We will stand up and fight them all,” Farage pointed out.

Separately, he told the Daily Mirror that he wanted “nothing” from the government and that he has “asked for nothing.”

He admitted that he was offered a peerage in return for not standing against the Conservatives, adding “ridiculous – the thought they can buy me, a high-paid job; but I'm not interested, I don't want to know.”

Conservative Party chairman James Cleverly, for his part, welcomed Farage’s move, saying that the Brexit Party had recognised they risked creating another hung Parliament which would prevent a “stable majority government."

Labour Party chairman Ian Lavery, in turn, said it now meant there was effectively a "Nigel Farage and Boris Johnson alliance with Donald Trump to sell out our country.”

Last week, Farage commented on the Brexit Party introducing 600 parliamentary candidates (PPCs) by stating that “there will be no Brexit without the Brexit Party” and that it was more important to support the Party’s 600 PPCs rather than “being hunkered down” to become elected.

He earlier told the BBC that he would not take part in the UK general election and that he had a better idea of sticking to Brexit by traversing the length and breadth of the United Kingdom supporting 600 [Brexit Party] candidates”.