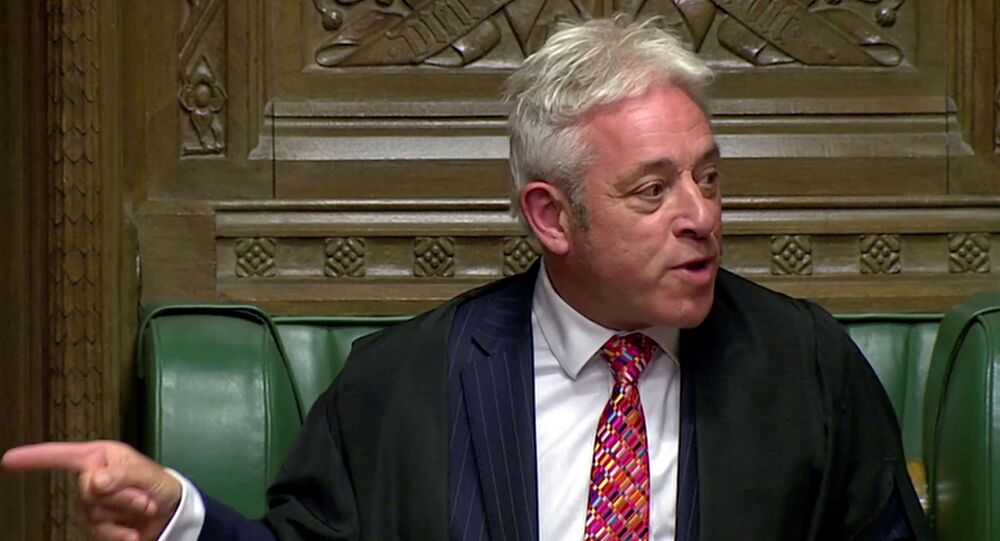 Mutual tensions between John Bercow, who quit as UK Commons Speaker at the end of October, and ex-Prime Minister David Cameron go back a long way, with friends reportedly saying it has much to do with their very different backgrounds, as the ex-speaker positions himself as a self-made Tory, perceiving Cameron as the product of privilege.

The former Speaker of the House of Commons, John Bercow, has stoked his longstanding rivalry with David Cameron, launching a stinging attack on the former prime minister for believing he is “born to rule”, in an exclusive interview with the Observer, published on Sunday morning.

Bercow, who stepped down as Commons Speaker at the end of October, has been forthcoming with his opinions since quitting.

Asked about his relationships with prime ministers during his decade in the Speaker's chair, he told The Observer he got on well with the current occupant of Number 10, Boris Johnson, yet tore into David Cameron over the decision to call the 2016 referendum on Britain's membership in the European Union.

Bercow went on to say that Cameron “could be very impressive” on big occasions but pointed out:

"David is relentlessly tactical rather than strategic."

He went on to add:

"Let’s face it, he chose to call the referendum. Was there a clamour for it? There was not. There was chuntering in his own party, but the public wasn’t demanding one. He just thought it would work for him."

"He has the most enormous, probably public-school-instilled, self-confidence. He thinks people like him are born to rule, that the natural order is that people like him run things, and that he is in a superior position."

During the interview, Bercow dismissed questions about how he was intending to vote at the 12 December general election, saying:

Formerly the Conservative MP for Buckingham, Bercow stood down after 10 years as Speaker at the end of last month.
He will be succeeded by Labour’s Sir Lindsay Hoyle, who won the election to replace him last week.

Tension between John Bercow and David Cameron goes back a long way, with friends reportedly saying their rivalry is rooted in their very different backgrounds, as the ex-speaker considers he has earned the right to be in a position of power, while Cameron is the product of privilege from a class that believes itself "born to rule".

Bercow's father drove minicabs for a living and he went to Finchley Manorhill comprehensive school in north London and then on to Essex University, wrote The Guardian, while Cameron, by contrast, was born into an upper-middle-class family, with a stockbroker father, and followed the classic route of Eton, Oxford and then the Tory party.

John Bercow's interview follows his major intervention on Brexit, when he labelled it the “biggest foreign policy mistake in the post-war period”.

Bercow addressed a Foreign Press Association event in London on 6 November and finally set out his personal views on the 2016 vote.
Asked how he believed Brexit would impact the UK’s international standing, Bercow apparently replied:

I was always fair in the chair, I’ll say this to my dying day #JohnBercow but now I can say what I think: #Brexit is the biggest foreign policy mistake in history. #Brexit @CNHIndustrial pic.twitter.com/NUSck8jQmM