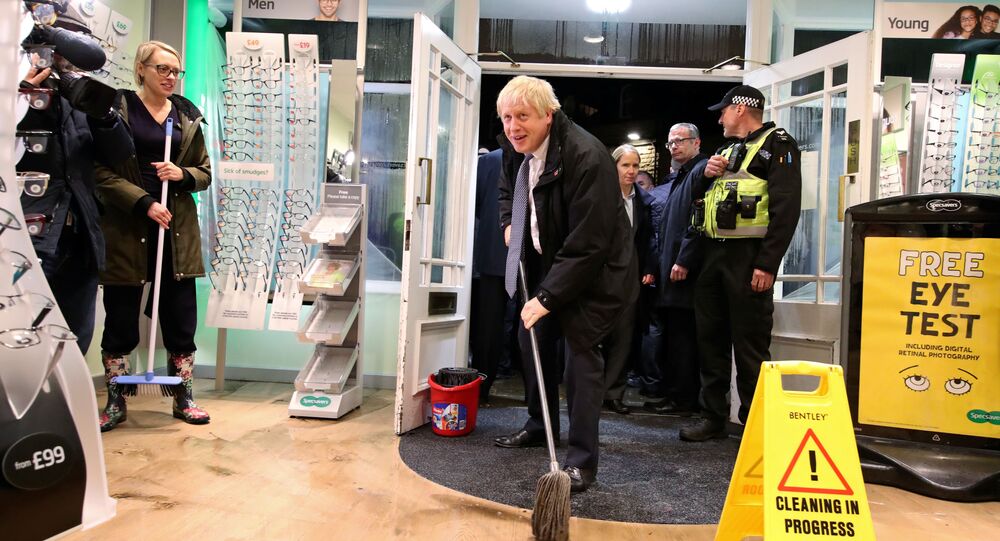 Just as the 2019 snap General Election in the UK, scheduled for 12 December, gets into full swing, the north of England is struck by huge rainfall and flooding, seeing residents of Doncaster, Sheffield, and other northern regions mired in up to 4.4 inches of rainfall.

During a visit to Matlock on Saturday, Derbyshire Prime Minister Boris Johnson was filmed picking up a mop to help remove some surface water from a flood-struck Specsavers.

The Sky News video shows the Prime Minister, seeming to struggle with the cleaning utensil, using one hand to manoeuvre the mop and failing to remove much of the water.

"You're lucky none of your stock has been damaged," he told shop workers.

After picking up the mop he announces emphatically "let's get mopping".

An anonymous citizen shouts "Boris" at the Prime Minister, to which he responds with a "Yeah, how you doing?" before saying he needs to "speed up" his "work rate here".

The act did not seem to go down well on Twitter, with users criticising the Prime Minister for using the crisis for a "photo op".

As a woman dies in #floods, Boris does a cheery photo op. pic.twitter.com/9zuGtrKVwp

Electioneering again. Arrived at Derby, mops out police station closed under Tory cuts & opened for crisis. Mops up and leaves. Same place a body retrieved from waters in Derby. Sickening. If only he really cared about others. ME, ME, ME. 😡😡😡@BorisJohnson@10DowningStreet pic.twitter.com/oBLrh24S5W

Show me a better image of @BorisJohnson's cynical opportunism:

- Tragedy strikes
- Vulture-like, Boris swoops in for a photo-op
- Grin for the camera; posing with a mop.

Others criti​cised the PM who hails from Eton, a top private school in the UK, for probably being the "first time he's held a mop in his life".

Probably the first time he's held a mop in his life.

The video emerged as widespread flooding has hit large parts of northern England, resulting in the death of one woman, hundreds trapped in shopping malls, while others were stranded in their cars, and train lines blocked.

Johnson tweeted on Friday saying that the flooding was "awful" and thanked "the emergency staff & volunteers helping families through this difficult time".

The Environment Agency issued 121 flood alerts and 117 flood warnings for England, including "danger to life" warnings.

While Johnson may be offering to aid in the flood relief effort, leaked documents submitted to ministers in 2016 revealed that government cuts under his ruling Conservative Party may have contributed to the damage.

The document revealed that the Environment Agency’s funding for maintaining flood assets has fallen by 14% and puts "households at significant risk" due to a reduction in the capacity to deal with flooding.

Boris Johnson is currently campaigning in a General Election which will be held on 12 December, hoping to gain a majority in order to pass his EU withdrawal bill through parliament.