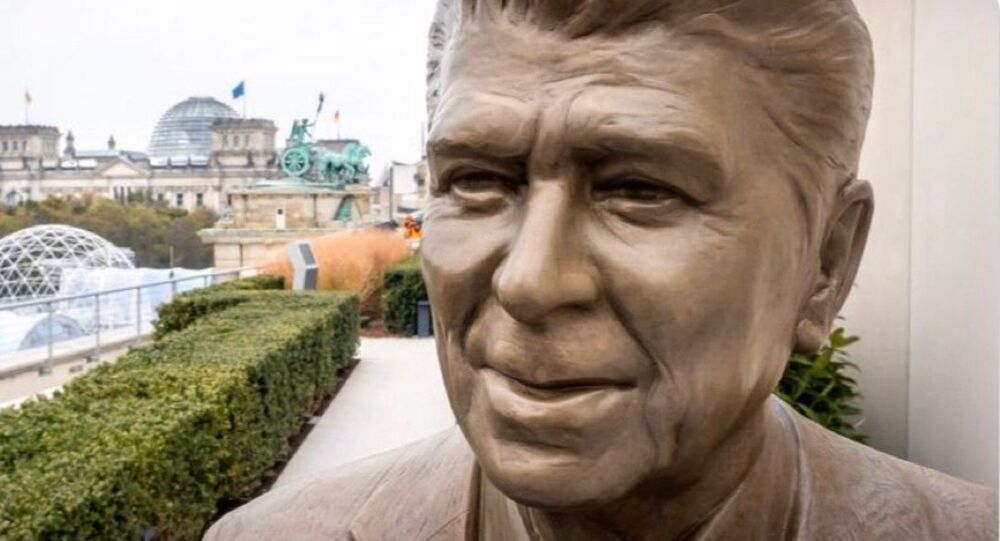 American Idol: US Forced to Put Reagan Statue on Berlin Embassy Grounds Due to Opposition

Despite years of resistance, Germany will be the recipient of an 84-inch bronze statue of former US President Ronald Reagan following a Friday inauguration ceremony - one day prior to the 30th anniversary of the fall of the Berlin Wall.

US Secretary of State Mike Pompeo is set to appear at the US Embassy in Berlin, Germany, on November 8 to formally inaugurate a 7-foot statue of Reagan that has been consistently rejected by the German capital.

“We all knew that the president felt very, very strongly about Berlin. He felt Berlin stood for freedom, surrounded by a totalitarian regime, and he saw it as his job to stand by the people of Berlin,” Clark S. Judge, a former Reagan speechwriter and the current managing director of White House Writers Group Inc., told the Wall Street Journal.

Though Reagan is known for his “tear down this wall” speech near the Brandenburg Gate on June 12, 1987, many viewed the US’ efforts towards placing the statue in a public place as attributing the 1990 German reunification solely to Reagan.

“There have been many US presidents who could be honored,” Sabine Bangert, chairwoman of the Berlin parliamentary committee on monuments, argued, also pointing out that there were not only several other foreign leaders who supported German reunification efforts, but also people from communist East Germany who helped bring down the Berlin Wall.

The 84-inch bronze statue, designed by sculptor Chas Fagan, was commissioned by the Ronald Reagan Presidential Foundation earlier this year, not long after US Ambassador to Germany Richard Grenell dedicated the embassy’s outdoor space overlooking the Brandenburg Gate to the late president.

We have officially renamed the Embassy’s outdoor space “The Ronald Reagan Terrace”.
It overlooks the exact spot where Reagan gave his Tear Down This Wall Speech. https://t.co/enaKa7j1gi

However, even before the US diplomat decided a plaque was not enough, the WSJ reported that the US had been vying for a statue installation for quite some time. Efforts reportedly intensified to no avail in 2011, which was the centennial anniversary of Reagan’s birth.

“We [were] met with resistance, and we were told it would be near impossible to make such a statue in Berlin,” John Heubusch, head of the Reagan Foundation, told the outlet.

With no government approval for a public location, the 7-foot bronze statue of Reagan holding a speech card that says, “Mr. Gorbachev, tear down this wall” will be placed on the US Embassy’s fenced-in plot.

“We had to place it on American soil,” Heubusch said of the embassy site, “but at least that soil is going to reside in the city of Berlin.”