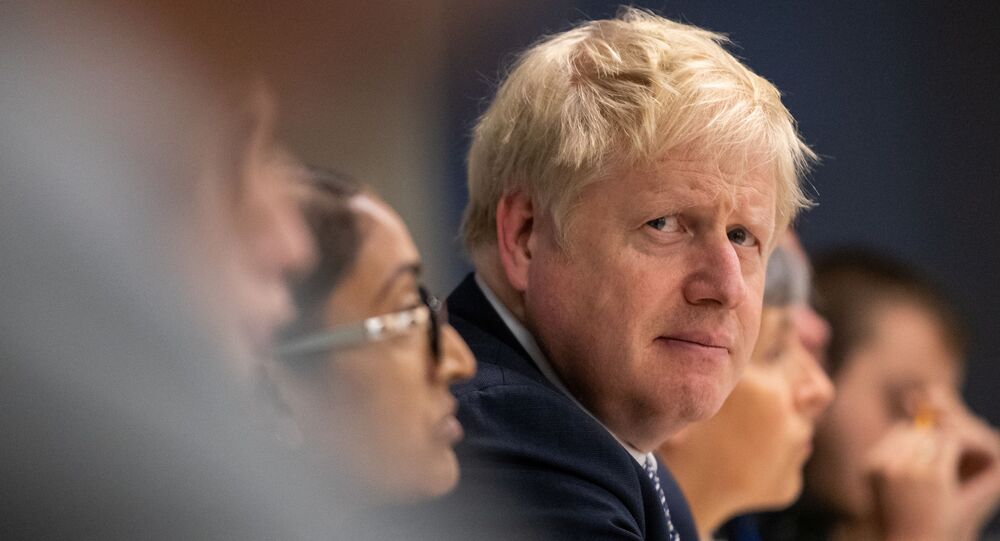 Boris Johnson has reportedly blocked the publication of a dossier cleared by British intelligence that looked into Russia’s alleged role in the 2016 Brexit referendum. Downing Street has asserted it is a common procedure whereby it takes the government up to six weeks to clear the findings of such reports to make sure they can be made public.

A number of parliamentarians found fault with Prime Minister Boris Johnson on Monday night, accusing him of spearheading a diplomatic cover-up after No. 10 delayed the publication of a 50-page report looking into alleged Russian involvement in British politics and the Tories in particular. Downing Street, for its part, has made it clear that the dossier from the intelligence and security committee should not be published before the snap elections on 12 December, The Guardian reported.

However, the committee’s chairman, Dominic Grieve, referred to the move as “jaw dropping” saying no reason for the refusal had been provided. While the report, said to be based not only on analysis from UK intelligence agencies, but third-party experts like former MI6 officer Christopher Steele, who previously dug up a dismissed dossier on Donald Trump, his win in the 2016 vote, and Russia, first needs to go through a final clearance from the prime minister’s office, Downing Street asserted. Sources stated, as cited by The Guardian, that a typical sign-off takes six weeks. “There are processes reports such as this have to go through before publication, and the committee is well-informed of these", a government spokesman noted.

Meanwhile, the move has to be undertaken before Parliament is dissolved on Tuesday if it is to be published before the December vote.

The dossier is purported to have already been approved by the intelligence agencies themselves as part of a long clearance process that kicked off in late March. Downing Street was sent a final draft on 17 October, and was expected to sign off on the report by the end of last week.

The committee’s chairman, Dominic Grieve, brought up the protocol to follow on the matter:

“The protocols are quite clear. If the prime minister has a good reason for preventing publication he should explain to the committee what it is, and do it within 10 days of him receiving the report. If not, it should be published".

The dossier purportedly examines alleged attempts by Russia to interfere in the 2016 EU referendum, while members of the committee, which holds secret meetings citing the sensitivity of its work, stated it wanted to advise to introduce greater overall safeguards ahead of the December poll.

Ministers have argued that there are no examples of fulfilled Russian interference in UK elections, but Ian Lucas, a Labour MP who sits on the culture media and sport select committee said that this needed to be properly tested: “This decision looks like it is designed to avoid proper scrutiny of what we actually know".

One of the persons mentioned in the dossier is Sergey Nalobin, who served as the first secretary of the Russian Embassy in London from 2010 to 2015 and negotiated the reception of a parliamentary group, the Conservative Friends of Russia. Despite previous claims of having been expelled from London, reports, including a November 2017 article by The Observer and The Guardian turned out to be false, as the UK Foreign Office later confirmed that “Mr Sergey Nalobin was not expelled from the UK, but left the UK upon the expiry of his vignette [a kind of visa]'". The note was added by the Guardian to its initial story on 22 February 2018.

Allegations that Russian money has been accumulated in the Tory Party via Russian immigrants in the UK making donations, were also heard by the committee, with the Tories having consistently denied receiving money in an improper way.

While the British government has more than once accused Russia of interfering in the 2016 national referendum on the UK's withdrawal from the EU by using fake accounts on social networks, Facebook, which has conducted multiple investigations into the matter, weighed in on the debate, stressing for its part that it found "absolutely no evidence" to back up the claims. Likewise, according to a recent Buzzfeed report on the aforementioned dossier draft and it sources, UK intelligence agencies have “categorically” found no evidence the Kremlin interfered in the outcome of the Brexit referendum and the 2017 general election.

The dossier comes amidst a breakthrough development in British domestic policies, which saw a snap general election approved by the UK Parliament's House of Commons early last week, a day after Brussels okayed another deadline extension for the UK. EU negotiators gave London three months, until 31 January 2020, to ratify Johnson’s Brexit deal.