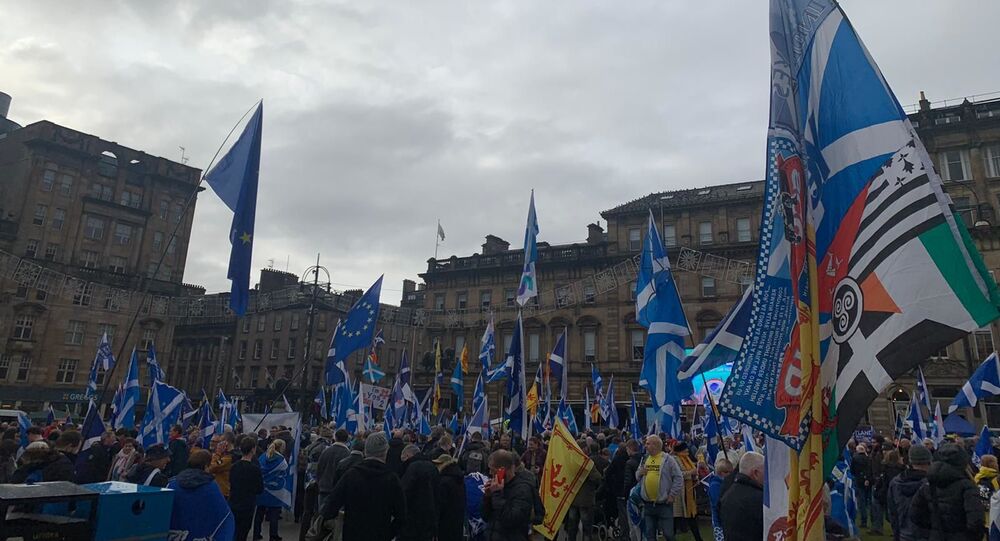 Nicola Sturgeon and the ruling Scottish National Party (SNP) are determined to deliver a new independence referendum in 2020 and plan to make an official request before the end of the year, against the backdrop of a snap general election and the new Brexit 31 January deadline.

A rally calling for a Scottish independence referendum in 2020 was held at George Square in central Glasgow on Saturday afternoon, seeing First Minister Nicola Sturgeon speak for the first time at such an event since 2014, the year when Scotland held its first referendum on independence.

Sturgeon took to the stage to rapturous applause, and reaffirmed a statement she made on Friday that she would request an independence referendum from whoever is in Number 10 by Christmas.

​The First Minister hit out at Prime Minister Boris Johnson and Labour leader Jeremy Corbyn, for refusing to hold a "proper debate" during the election. Referencing the proposed ITV debate between the two leaders on 19 November, which has recieved a backlash for excluding the leaders of the SNP and the Liberal Democrats.

An array of other pro-independence voices also attended: including National columnist Paul Kavanagh, the Scottish Greens co-leader Patrick Harvie, and Maggie Chapman, the convener of the Scottish Independence Convention.

The rally, which was organised by The National newspaper, saw a turnout of around 20,000 in the square, according to the organiser on stage.

A singular demand was made from the crowd, brandishing a sea of blue and yellow flags emblazoned with the 12 stars of the EU and the Scottish saltire, that Scotland be granted a second chance to vote on Scotland's independence from the UK in 2020.

​Despite the rain and trouble with sound equipment, the protestors shook off the inconvenience with traditional Scottish anthems and pop songs.

One demonstrator said that they turned out due to the "looming" independence referendum and they "wanted to show our support".

When asked what election outcome they believed the would be most beneficial to the independence cause, she replied: "I wouldn't trust any of them with a barge pole right now."

"At the end of the day they're having more and more general elections because they can't what they want so it's only fair they hear our voices," she added.

A smaller contingent of Unionist counter demonstrators turned out to meet the gathering, flying union jack flags, and heckling the pro-independence crowd, singing "God Save The Queen" and "Rule Britannia.

Founder of The National newspaper, Richard Walker said “We want to bring the movement together and speak with one voice to send a message to Westminster that we don’t ask, we demand the opportunity to take control of our own future".

"This is the first time The National has organised a public event. Its aim is to provide an opportunity for the whole independence movement to come together ... as the Brexit chaos continues to unfold," he said

The demonstration comes as the country gears up for a UK general election on 12 December, with the SNP hoping to ride a wave of pro-independence sentiment and secure itself a second referendum in 2020 during the next parliament.

Both Prime Minister Theresa May and her successor Boris Johnson have rejected demands for a second vote by Sturgeon, who claims that the 2016 Brexit vote, in which Scotland voted largely to remain, changed the nature of Scotland's relationship with the UK.

Shadow Chancellor John McDonnell said in August that a Labour government would be open to allowing a second Scottish referendum if it were to take power in Westminster.