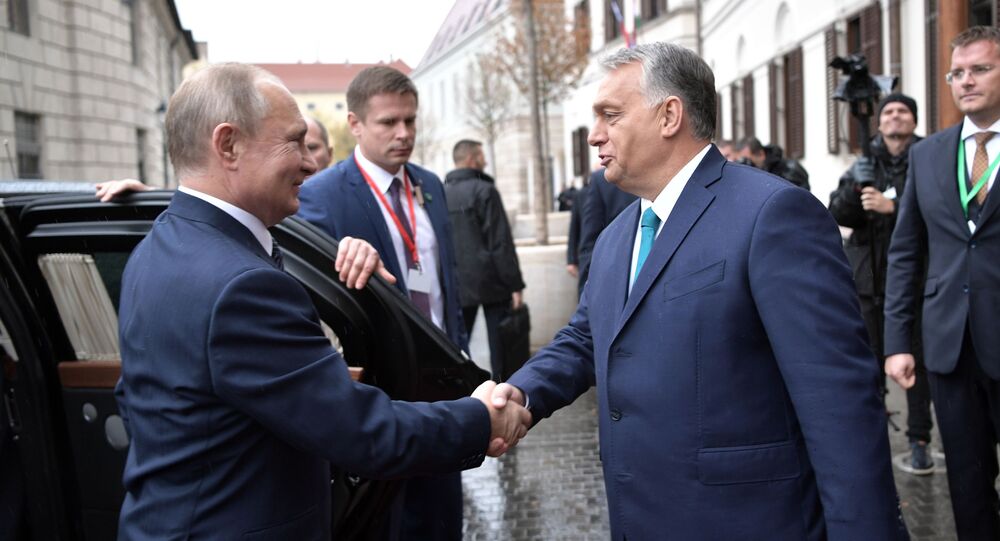 Hungary is one of Russia's priority partners for the gas transit to Europe through the existing routes as well as new routes, Russian President Vladimir Putin said during his visit to the Hungarian capital city of Budapest.

He further elaborated that involvement in the TurkStream pipeline project is of high interest for Hungary.

"Regarding the time frame of Hungary joining the TurkStream: as far as I assume - the prime minister will correct me now if I am wrong - the participation in this project is a significant interest for Hungary in terms of ensuring its energy security and enhancing its role in the European energy, in general. We will only welcome if it happens", Putin said.

In the meantime, Hungarian Prime Minister Viktor Orban stated that Hungary is looking for alternatives to Russian gas supplies in order to keep its energy sovereignty.

"Sovereignty in the energy production and supply sector means that we want to keep our sovereignty. Where we get that energy is an important issue. Russia is our energy supplier, but we are considering other alternatives, and we hope to be able to diversify energy sources", he said.

Orban, who spoke side by side with Putin at a news conference, stressed that "gas should flow to Hungary from different directions."

Deal With Hungary, Slovakia to Boost Oil Exports Via Druzhba Pipeline Until 2025

The extended agreement on oil supplies to Hungary and Slovakia will allow Russia to increase its exports via the Druzhba pipeline until 2025, Russian President Vladimir Putin noted.

"Lukoil, Transneft and Hungarian company MOL have signed agreements, whose implementation will allow for an increase in exports of Russian oil to Hungary via the Druzhba pipeline until 2025", Putin stated.

The agreement was signed at an official ceremony during Putin’s visit to Budapest.

During a press conference following his meeting with Hungarian Prime Minister Viktor Orban, the Russian president said that he had informed the Hungarian leader about Moscow's efforts to end the ongoing conflict in Syria.

"The work of the constitutional committee, for the establishment of which Russia and its partners, Turkey and Iran, have done a lot, will facilitate a political settlement of the Syrian crisis", Putin said.

Putin continued by saying that the Christians in the Middle East are in distress as they are being persecuted and robbed, and Russia is doing everything to support them.

“Everyone knows that the Middle East is the cradle of Christianity, but, at present, Christians there are in distress as they are being persecuted, killed, raped, and robbed”, Putin noted.

The 150-member Syrian Constitutional Committee is convening for the first time in Geneva on Wednesday. Representation within the body is split equally three ways between the nation's government, opposition and civil society. It also has the smaller committee within it that includes 45 people — 15 from each of the three represented groups — that will prepare constitutional initiatives, while the larger body will be responsible for adopting them.