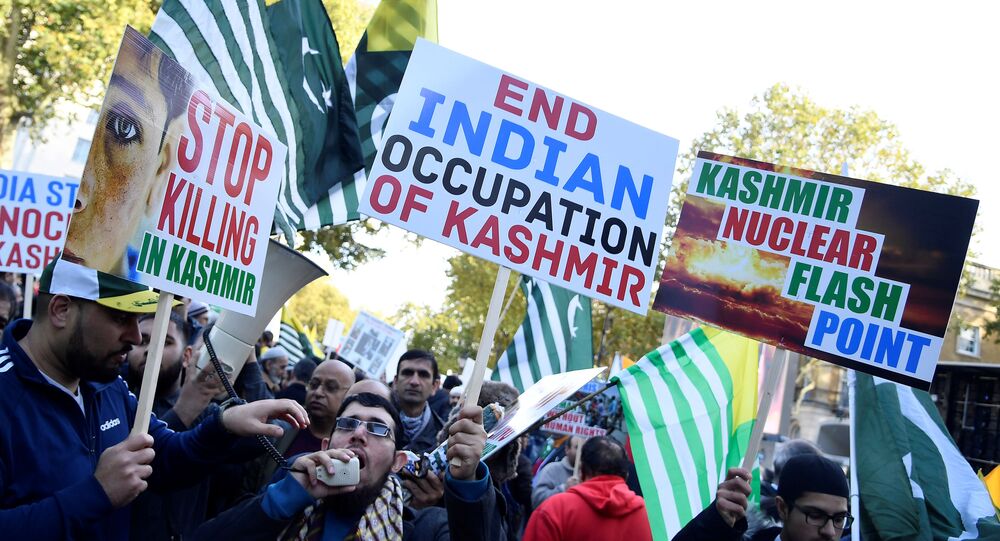 New Delhi (Sputnik): Hordes of people gathered outside the Indian High Commission in London on the most important Hindu festival Diwali to protest against the Indian government’s decision on Kashmir, prompting the Mayor of London Sadiq Khan and columnist Katie Hopkins, among others, to condemn the rally.

British columnist and media personality Katie Hopkins took to Twitter on Sunday to share that she was heckled by protesters during the rally by the UK-based group Tehreek-e-Kashmir.

She was visiting the rally to show support for the “peaceful Indian diaspora” and Indian Prime Minister Narendra Modi.

Hopkins also shared videos of the incident in a series of tweets and raised questions over the “Pakistani Muslim mob” being allowed to carry out protests during the religious festival of Diwali.

This was the treatment I faced

Mostly men. Mostly calling me a ‘slut’ or ‘whore’

My thanks to @metpoliceuk for their generous assistance pic.twitter.com/XCZEuO22Zh

The video has racked up more than 700,000 views within 24 hours of posting and evoked a flurry of reactions.

In the video, Hopkins can also be heard saying that she feels like she is under attack, while a protester asked her “are you getting paid to hate Muslims”.

The video by Hopkins led to a huge uproar on social media with protesters slammed for planning their protest to coincide with the biggest Hindu festival.

Where are the police?
Where are the London Leaders?
I'm old enough to remember when this sort of thing would NEVER be tolerated against British citizens.
You seem to have to reach into history to find a British leader to defend you...
...will Winston Churchill, please stand up!

If this was a Pakistani lady being treated like this by white men, they would have all been arrested and their names dragged through the mud!

This is my London? It's breaking my heart.
Thanks, Katie, for bringing this outrage to our notice.

Pakistani men in England behaving in the most deplorable manner.These uncouth louts are spouting lies on Kashmir as they harangue her and try to drown her voice using their megaphones, exposing their pettiness in full public display.Happy Diwali Katie! Bring them on !

Videos of protesters beating and stomping on an effigy of Prime Minister Modi also emerged on social media with Twitter users condemning it as “sheer hatred”.

Check this out. Truly shocking. Pakistani Muslims stamp on the head of an effigy of @PMOIndia in central London. On #Diwali of all days. This is sheer hatred and @metpoliceuk should arrest all concerned. pic.twitter.com/K1eZXLY29f

However, the organisers of the “Free-Kashmir” rally have denied the accusations of their rally being anti- Hindu or anti-Diwali. They also said that they respect celebrations of Diwali by people across the country.

The “Free Kashmir” demonstration was also condemned by a group representing over 100 British organisations, saying the protest was planned to coincide with Diwali which is an act of “Hinduphobia” and racism.

Indian authorities in London had raised serious concerns over the proposed anti-India protest over Kashmir scheduled on the day of Diwali. It was conveyed through a Note Verbale to the British government, citing security threats to Indian officials working at the London office.

The continuous anti-Indian protests come after New Delhi revoked the special status of Jammu and Kashmir on 5 August. The abrogation of the special status of Kashmir was followed by a chain of events in August, leading to the imposition of a curfew in the Kashmir Valley, and Pakistan raising the issue at the recently held 74th UN General Assembly.