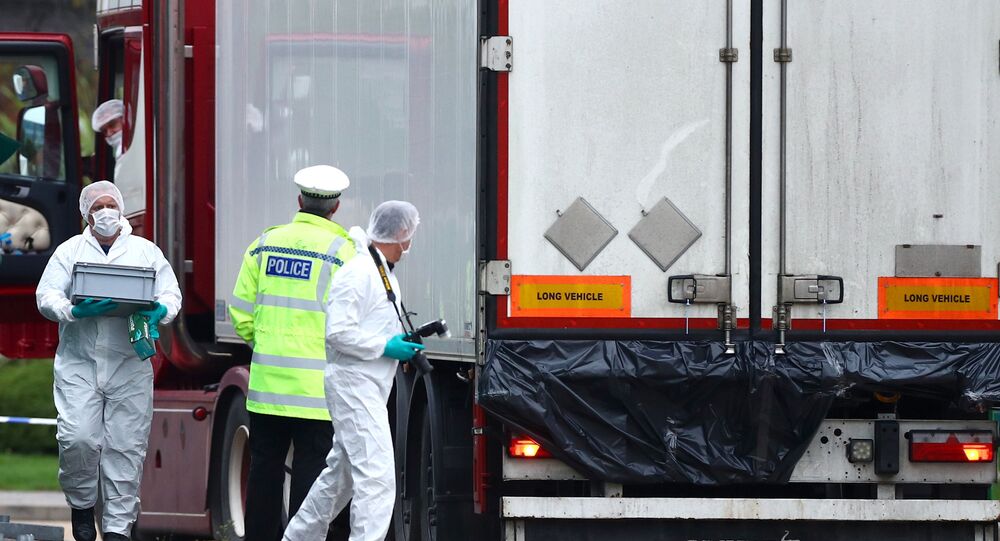 The arrest comes as UK investigators continue to question four people about the 39 migrant deaths, an incident which is said to have created the biggest British murder investigation since the July 2005 Jihadist suicide bombings in London.

Driver Maurice Robinson, 25, has been charged with 39 counts of manslaughter, conspiracy to traffic people, conspiracy to assist unlawful immigration and money laundering, British police have said.

Earlier in the day, a fifth person was arrested in connection with the death of 39 migrants who died after being locked in a freezing cold container bound for the UK, The Daily Mail reports.

Robinson was detained after he got off a ferry on Saturday afternoon. He is thought to be from Northern Ireland.

It was preceded by the blue Scania truck that the man was driving being impounded by the police.

Murder quiz trucker 'passed out' at sight of 39 frozen bodies
The lorry driver being quizzed on suspicion of mass murder fainted when he discovered the bodies of 39 #Chinese migrants in the back of his trailer. pic.twitter.com/qJdL3sqznR

Earlier, UK police in Essex said that all of the 39 victims are already out of the truck and in a mortuary, where autopsies are yet to be conducted.

According to Detective Chief Inspector Martin Pasmore, the victims have yet to be identified amid social media reports that many of the victims were from Vietnam.

39 dead Chinese people, found frozen and suffocated in a refrigerated truck container in the UK—presumably undocumented migrants, crossing ahead of Brexit.

Harder borders don’t stop the movement of people. But they do inspire the desperate to take risks that end in tragedy. https://t.co/BWUE0NbE1J

He spoke after the Mirror cited unnamed sources as saying that 39 migrants who were frozen to death left “bloody handprints” on the walls and doors of the container.

“When the door of the container was opened, first responders were shocked to see dozens of dead bodies piled on top of one another. The bodies closest to the doors had foam coming from their mouths and were in the early stages of rigor mortis,” the sources claimed.

This came as police continue to question four people about the migrant deaths.

On October 25, British police officers reportedly detained a 48-year-old-man from Northern Ireland on suspicion of conspiracy to traffic people and manslaughter.

39 migrants found frozen to death in a truck in London. This is truly horrifying. pic.twitter.com/xCdHJFHfi7

Also, the police arrested another man named Thomas Maher along with his wife, Joanna Maher, both 38 years old, from Warrington in England. The two were arrested on 39 counts of manslaughter and people trafficking.

Police also added that, “a 25-year-old man arrested on Wednesday [October 23] on suspicion of murder remains in custody.”

They referred to Mo Robinson, the lorry driver who picked up the box containing the 39 migrants from the Purfleet Docks on the River Thames in the early hours of Tuesday after it had travelled on a freight ship from Belgium.

European police believe that the migrants entered the refrigerated container before they got to a port in Belgium in order to avoid detection by the authorities.