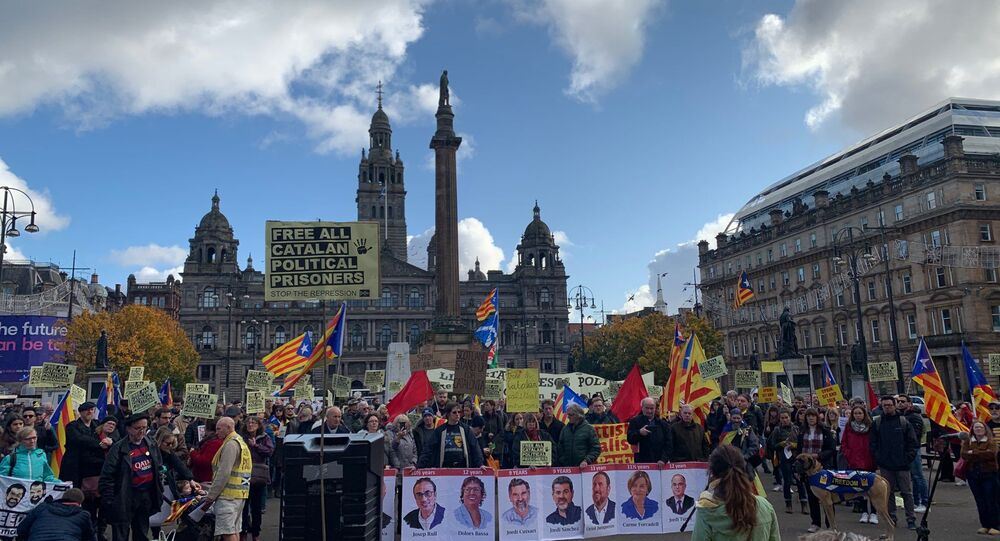 Over a hundred protestors turned out for a demonstration in Glasgow on Saturday, in solidarity with independence protests in Catalonia and against the jailing of political leaders by the Spanish state.

The protest was held in George Square from midday to 1.30pm, drawing a range of speakers from Scottish trade unions and former Catalan officials.

Placards and banner, including photos of the detained independence leaders, called for an end to "state repression" of the movement.

Speakers hit out at current Spanish Prime Minister Pedro Sanchez of the governing Spanish Socialist Workers' Party, for calling for a "political solution" to the Catalan question, while overseeing the crackdown of protestors while in power.

The speakers even criticised British Labour Party Leader Jeremy Corbyn for his friendship with Sanchez, despite his previous condemnation of how Catalonian independence demonstrators were treated under the preceding Rajoy government.

Corbyn urged former Prime Minister Theresa May to help find a "political solution" to the Catalan crisis in 2017. However, the Labour leader has yet to comment on the issue as it unfolds under Spain's current socialist prime minister.

In a reference to Spains fascist past under General Francisco Franco, who brutally repressed the Catalan people after winning the Spanish Civil War in 1939, one of the speakers asked "What is the point of exhuming General Franco's remains, while continuing the legacy of Francoism through "state terror"?

The demonstrators also condemned the "silence" of the European Union, of which Spain is a member, with regard to the Spanish governments treatment of Catalan leaders.

A demonstrator, who lived in Catalonia, said that he came out "in solidarity" with the "concerns" of the Catalan people.

When asked about criticisms against Catalan independence, that the movement within the comparatively wealthy region of Spain, is being driven by a desire not to subsidise the poorer Spanish regions, he said "it is a fair criticism" but that it requires "a balance on how it is treated on a state level."

Glasgow in solidarity with Catalonia. pic.twitter.com/T7RTAjqLpM

​Supporters of the demonstration include Unison Scotland, Catalan National Assembly Scotland, Glasgow Trades Union Council, All Under One Banner and Glasgow City Unison.

The demonstration was organised by the Catalan Defence Committee Scotland (CDCS), an organisation modelled after the committees which lead the Catalan independence movement.

They are demanding an immediate release and acquittal” of all Catalan political prisoners, and for resistance to “threats to democracy in other European cities", as outlined in a statement from the Scottish Trade Union Congress (STUC).

According to the CDCS the protest aimed to cross political boundaries, regardless of positions on Scottish independence or Brexit. It called for support from "anyone who supports the right to self-determination, the right to vote free of violent repression, and who opposes the clampdown on dissent".

The Spanish government has argued that since the arrests, the situation has normalised and that the Catalan movement includes violent groups who wish to see the crisis continue.

According to the emergency services however, 13 people were detained on the 20 October after violence broken out between protestors and police. 14 civilians also sustained injuries: 11 in Barcelona and 3 more in Girona. The police used rubber bullets, tear gas, and water cannons in attempt to quell the demonstrators.

Scottish politicians have condemned the Spanish governments treatment of the Catalan protests, even comparing it to the British state's crushing of the Irish Easter Rising in 1916.

A protest against the jailing of Catalan independence activists

​On 15 October, Glasgow North East Labour MP Paul Sweeney said “It might have been lawful, but it can be best described as a massively counterproductive act of repression."

Mass-protests erupted on 14 October in the streets of Catalonia in response, and hundreds of thousands gathered in the Catalan capital of Barcelona to launch a general strike. The large protests came after nine civil and political figures were jailed in Spain for between nine and 13 years for their role in Catalonia’s 2017 independence referendum, being charged with sedition and the misuse of public funds.

Like Catalonia, Scotland too has a significant pro-Independence movement which seeks separation from the United Kingdom. Since the narrow defeat for independence in 2014 and even more so following the vote to leave the European Union in 2016, the leading Scottish National Party in Scotland has been demanding a opportunity to hold a second vote on whether Scotland should separate.

Scottish National Party leader Nicola Sturgeon has expressed sympathy with the jailed political leaders, saying she was "appalled" by the outcome but also emphasising that Scotlands claim to independence must be peaceful and legal.