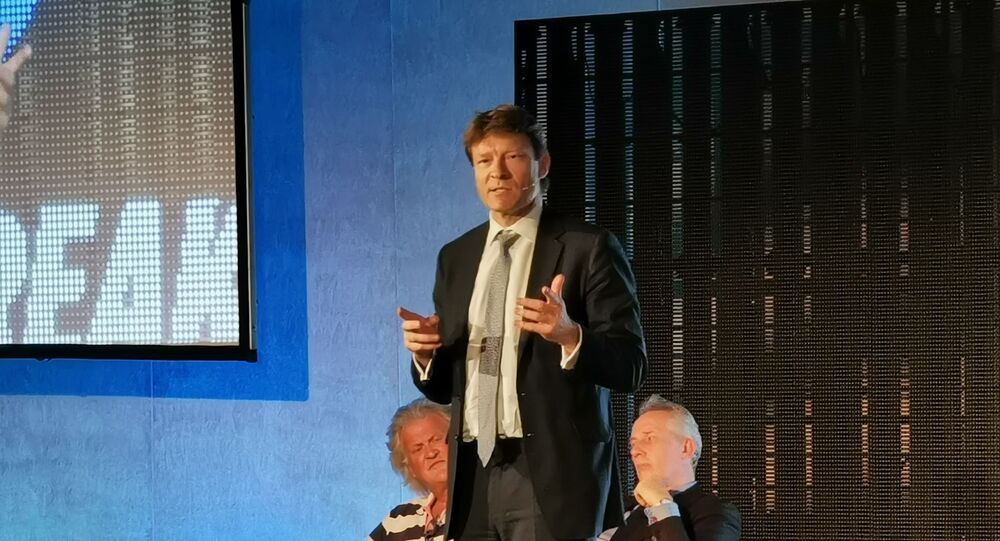 The Brexit Party's chairman issued the scathing statement hours after UK Chancellor of the Exchequers, Sajid Javid, spoke to BBC Breakfast on Friday morning, where he lamented that the UK may have no choice but to accept a further extension from Brussels.

The British government had "finally admitted" that the Tories were "powerless" to exit the European Union by the 31 October deadline, Brexit Party chairman Richard Tice said in a statement on Friday.

The Tory Party was "struggling to get anything past Parliament and the Remain establishment" due to having "so many within their own ranks" as Remainers, Mr Tice said, adding that his party pledged to "put country before party" to forge an alliance of Leavers to secure Brexit.

‘We will be paying tens of billions a year to be effectively locked in the EU, with no voice, no veto, and no vote", Mr Tice said.

He also called on MPs and parliamentary candidates (PPCs) to build a "Leave alliance" to deliver Brexit whilst roasting the "unrepresentative, zombie parliament" of Westminster.

The statement followed news that Britain would "have to accept" that Brexit had been blocked and that the EU would "probably offer a three-month extension", Mr Javid told the BBC on Friday.

Mr Javid said: ‘We have to accept, we won’t be able to leave on October 31st, because Parliament has requested an extension. And although we haven’t heard back from the EU yet, it’s likely, I think we just have to assume that they will agree to Parliament’s request. Not something that we wanted, but they will agree and probably offer a three-month extension.

Mr Javid added that [the deadline] could not be met because Parliament had asked for an extension and Brussels was expected to offer the delay, despite not formally responding to the Prime Minister's request.

Britain has been embroiled in Brexit turmoil since the 2016 EU Referendum, where citizens voted 50 to 48 percent in favour of leaving the European Union, but have since been blocked from fully exiting the bloc.

The British Prime Minister was forced to seek a further Brexit delay under the Benn Act after Commons voted 322 to 306 to pass the Letwin Amendment, withholding support for his Brexit Bill until new legislation allowing it to pass in Commons was approved. Boris Johnson, who vowed to deliver Brexit 'come what may', sent the delay request to Brussels without a signature along with a second letter slamming a further Brexit extension.

Mr Johnson is expected to call for a general election on Monday in a bid to break the Brexit deadlock with opposition parties, promising to allow lawmakers enough time before the dissolution of Parliament to debate the EU Withdrawal bill if they backed the 12 December motion. But Labour and opposition leader, Jeremy Corbyn, said that his party would only agree to snap elections if a no-deal Brexit was 'taken off the table', adding that the EU needed to decide whethr to grant a further Brexit extension before the government launched snap elections.