The rally succeeded the ‘We Are Ready’ tour, and took place a day after a critical EU summit in Brussels and just ahead of the Commons showdown on Saturday, the first to take place since the Falklands war.

Thousands of supporters attended the ‘Extension Rebellion’ rally in London on Friday 18 October at the Queen Elizabeth II Centre in Westminster.

Prior to the event, Farage said that it would be “one of the biggest weeks for Brexit since the referendum”, adding that he did not think there was a “cat in hell’s chance” of the EU agreeing to allow the United Kingdom a clean break from the single market or customs union.

Sputnik takes a look at the highlights from speakers at the event.

Mr Paisley thanked Mr Farage and the Brexit Party for working “demonstrating fidelity to our union and to our cause” as well as not giving up "when things become difficult, and keeping faith with the Ulster people”.

“Something that some people just don’t quite get, is that we are a united people,” he said. “That goes a long way.”

He discussed Boris Johnson’s recent visit to Belfast, where No 10 committed to preserving the Union with Northern Ireland and assured he would scrap the backstop imposed under former UK prime minister Theresa May’s Withdrawal Agreement.

“We want to get to the next phase of these negotiations as quickly as everyone else,” he added. “But we cannot recklessly treat the Union and leave a part of the Union behind, or in a state of limbo, which is exactly what would happen to Northern Ireland”.

“I can’t in good conscience support that,” Mr Paisley said. “And that’s why our party has made it very clear that tomorrow that we will vote against this agreement”.

In contrast, Mrs Widdecombe delivered a fiery speech to the audience on whether the Prime Minister’s Brexit deal was valid.

“Can we have Brexit and still be subject to the supremacy of EU law,” she asked, stating that the political declaration in the EU withdrawal agreement locked the UK “in perpetuity” to the EU. 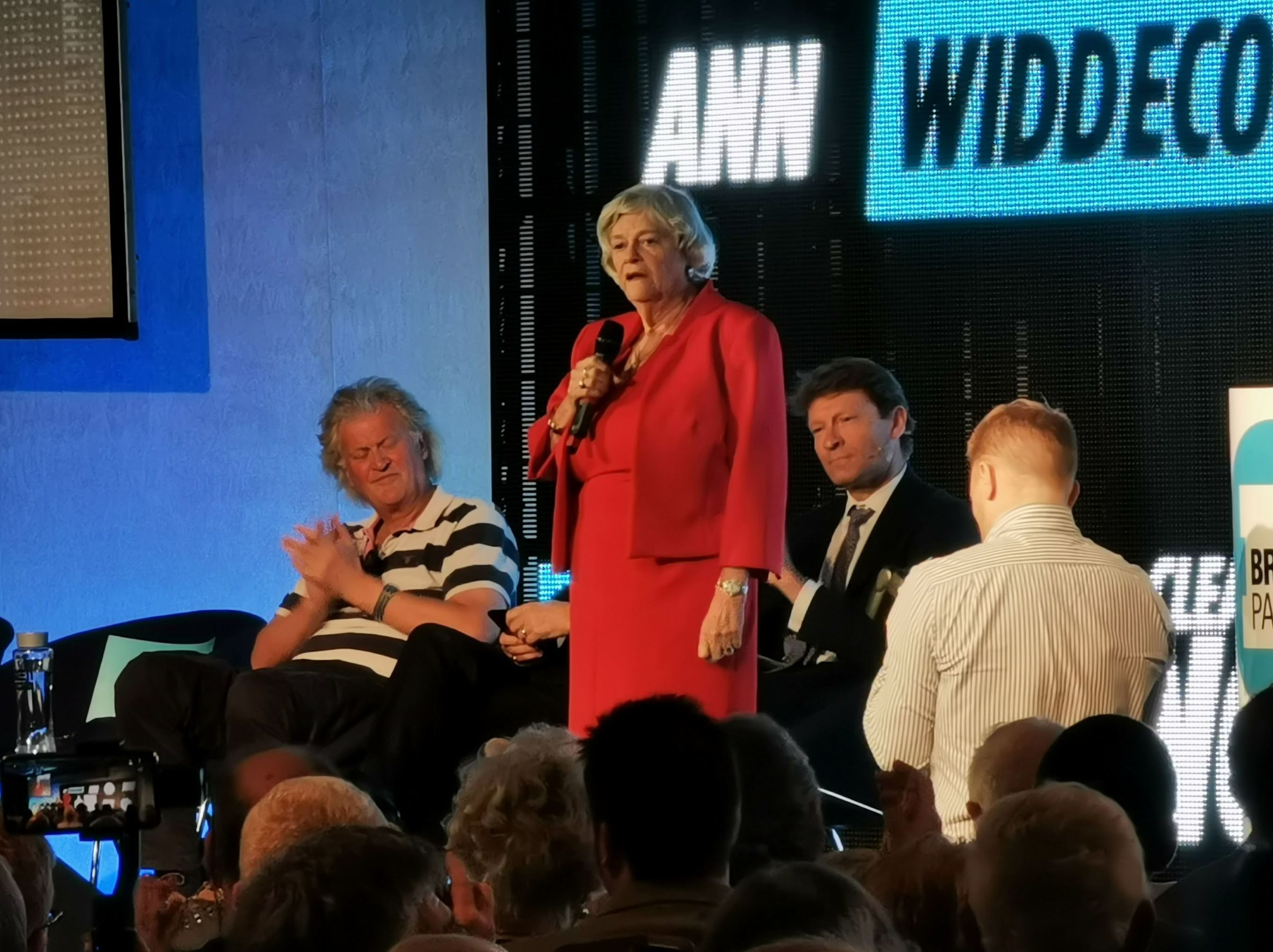 “That is not Brexit,” she said, adding that the current deal was an ‘improvement’ on May deal which was “hardly a difficult thing to achieve”.

Mrs Widdecombe slammed MPs voting to take no-deal off the table who complained of strong language used against them, namely those stating that delaying Brexit was a “betrayal”.

“Any MP that voted to take no-deal off the table, thereby quite deliberately weakening Britain’s position at the negotiating table, is guilty of betrayal,” she said.

She added: “That is what happens when a country loses a war, and the victor says that ‘You must obey our law and our law will always override yours.

She slammed the EU as a “foreign power” that wanted to become “ever more powerful”, with the UK not having any say in the institution. Making a clean break and dealing with the EU “as equals” would bring more advantages to negotiations, she added.

“If we are dealing with them as equals, then that is absolutely fine, but those are the provisions of this deal and this political declaration [which] binds us in perpetuity,” she said.

“Now if that isn’t treachery, I don’t know what is,” she said.

Ms Widdecombe said to the sound of applause: “They need to know that this country has not forgotten that in 2016, we voted not to half leave, not to quarter leave, not to leave with huge qualifications, not to stay but say we were leaving. We voted simply to leave.

Mr Farage said that under more positive circumstances, his speech “ought to be one hell of a party”, but opined that it was not so. 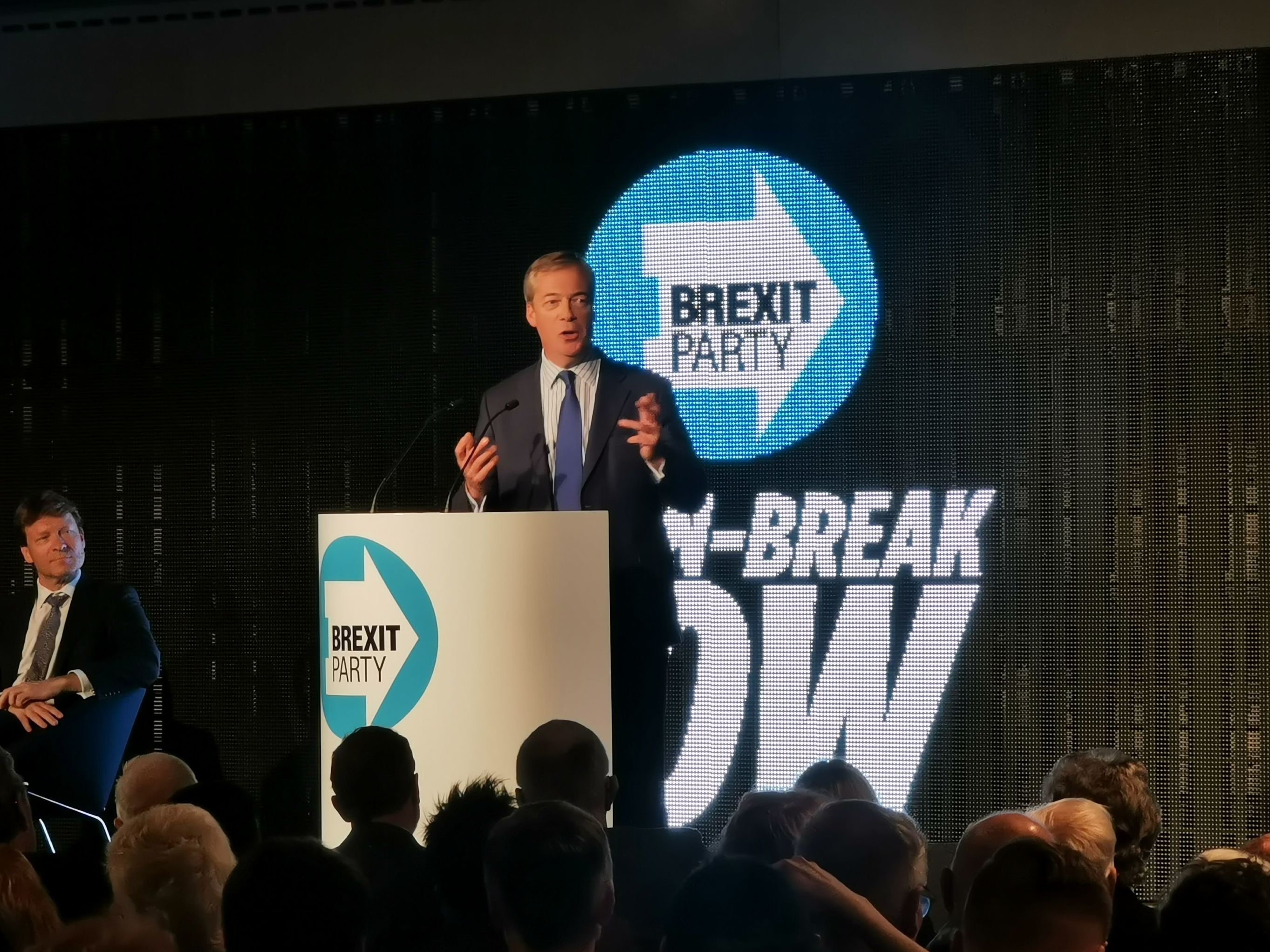 Mr Farage said: “Ever since May brought back that Chequers, I’ve had this rather sickening feeling that our current political class are aptly determined to stop us from having a clean break Brexit.

The clean-break Brexit voted for by the UK public would not be delivered by a “sellout” prime minister, he said, noting that MPs had voted down Mrs May’s ‘abject surrender’ Brexit plan three times and that Boris Johnson’s change in position for the Irish backstop was a “mystery”.

Farage said that he had founded the Brexit Party because it seemed to him that “everyone had given up”, but consequentially, his party had achieved getting rid of the “worst Prime Minister” in UK history and resetting Britain’s “entire political agenda”.

After becoming No 10, Boris Johnson had brought fresh enthusiasm and faced real problems, Mr Farage said, such as “a Remain parliament” and “a very partial Speaker [John Bercow]”.

But the Prime Minister began to “head in the wrong direction”, Mr Farage said, referencing months of tense negotiations culminating to the EU summit in Brussels on Thursday, where Mr Johnson had failed to reach a deal.

“Mr Juncker was smiling even more than he usually does in the afternoons”, he joked.

Further extensions to the withdrawal agreement would force the UK pay an additional £10bn to 15bn more a year, he said, as well as being liable for outstanding future problems should the Eurozone have troubles, costing the UK up to £14bn.

Farage also cited Section 129, paragraph 6 of the Withdrawal Agreement, which obliged the UK to refrain “from any action likely to conflict with or impede European Union action”.

The House of Commons was set to vote on a series of amendments to determine whether UK prime minister Boris Johnson’s revised withdrawal agreement could pass for submission to the European Union. The UK government required support from at least 320 of 650 lawmakers to pass the deal. PM Johnson said that he “would rather be dead in a ditch” than to delay Brexit beyond 31 October, but MPs voted 322 to 306 to pass the Letwin amendment on Saturday, withholding support for the PM’s Brexit deal until new legislation allowing it to pass is approved in Commons, potentially pushing the Brexit deadline to 31 January 2020.