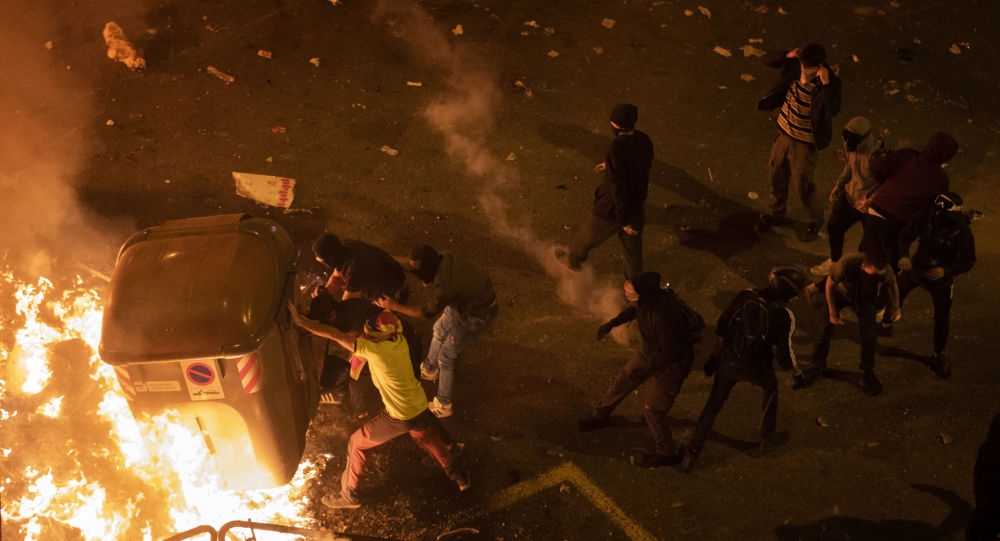 BARCELONA, Spain (Sputnik) - The police are trying to take unrest in Spain’s city of Barcelona under control and used rubber bullets and tear gas for it, a Sputnik correspondent reported, adding that the security forces also used a water cannon for the first time since the beginning of the rallies to extinguish burning barricades and garbage cans.

Friday marked the fifth day of the protests against a Spanish court decision to give prison terms to pro-independence Catalan politicians. While earlier in the day the unrest was concentrated at Via Laietana, where clashes between law enforcement officers and radical protesters took place, it subsequently spilled into nearby streets. The radical demonstrators were turning over garbage cans, setting up barricades and burning them, prompting the police to use the water cannon.

In this view, a water tank is used go through the barricades.
📹 @maykanavarro pic.twitter.com/sfrS1qqNou

The security officers are trying to suppress the radical activists, who are throwing bottles, cans and stones on them, with tear gas and rubber bullets.

Spain’s caretaker Interior Minister Fernando Grande-Marlaska has said that about 400 radical protesters were involved in the unrest in central Barcelona.

On Monday, the Spanish Supreme Court handled prison terms of up to 13 years to nine out of 12 accused politicians over their role in the 2017 Catalonia independence referendum that was not authorities by the central authorities.

Grande-Marlaska said more than a hundred people had been detained across the region in the past five days and over 500 had been injured, including 200 security officers.