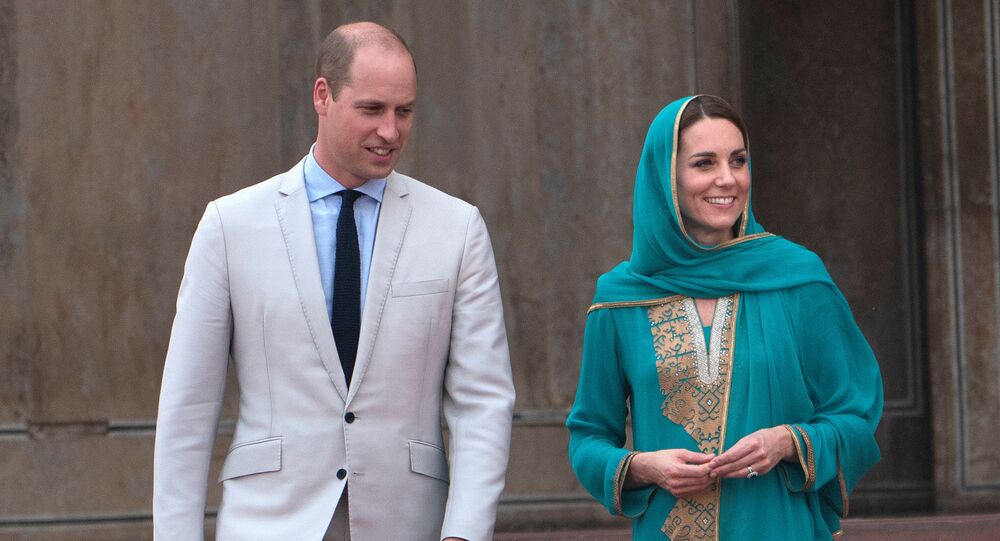 Frightening footage filmed on board Prince William and Kate Middleton's RAF Voyager plane shows it shaking and bouncing in a terrifying thunderstorm over Pakistan on 17 October, with the passengers experiencing severe turbulence.

One passenger was quoted by The Sun as saying it was a "pretty serious storm", describing the flight as a "rollercoaster".

The plane was in the air for more than two hours for what should have been a 25-minute journey, and after two failed landing attempts at the Pakistani Royal Air Force base and a commercial airport, the pilot opted to return to Lahore on Thursday evening.

The Duke and Duchess of Cambridge had been travelling with their team and media members to Islamabad in the framework of the final day of their royal tour of Pakistan.

Earlier on Thursday William and Kate had visited a government-run school in Islamabad, meeting with a group of teenagers.

We warmly welcome the Duke and Duchess of Cambridge, Prince William and Kate Middleton to Pakistan 🇵🇰
Today the Royal couple visited a Model school in Islamabad which was upgraded as part of PM Education Reforms Programme and
inaugurated by the former PM Nawaz Sharif his daug.. pic.twitter.com/xMwK3MOw5b

They also took part in a cricket tournament in Lahore, before paying a visit to the Shaukat Khanum Memorial Cancer Hospital and Research Centre.

Prince William and Kate Middleton, the Duke and Duchess of Cambridge, having a bat today at the NCA in Lahore #RoyalVisitPakistan #Cricket pic.twitter.com/NMS71eA7Fv

After the flight ordeal, the royals spent an unscheduled night in Lahore before flying out early on Friday morning to carry out their final day of engagements on the tour before returning home.

The Duke and Duchess have travelled to Pakistan at the request of the Foreign and Commonwealth Office, and it has been their first official visit to the country.

The Duke and the Duchess of Cambridge Prince William and Kate Middleton concludes their successful 5-day #RoyalVisitPakistan and have left for UK, wishing them a safe journey to home with loads of beautiful memories 🇵🇰🇬🇧 @KensingtonRoyal pic.twitter.com/lpjvZ1rhs4