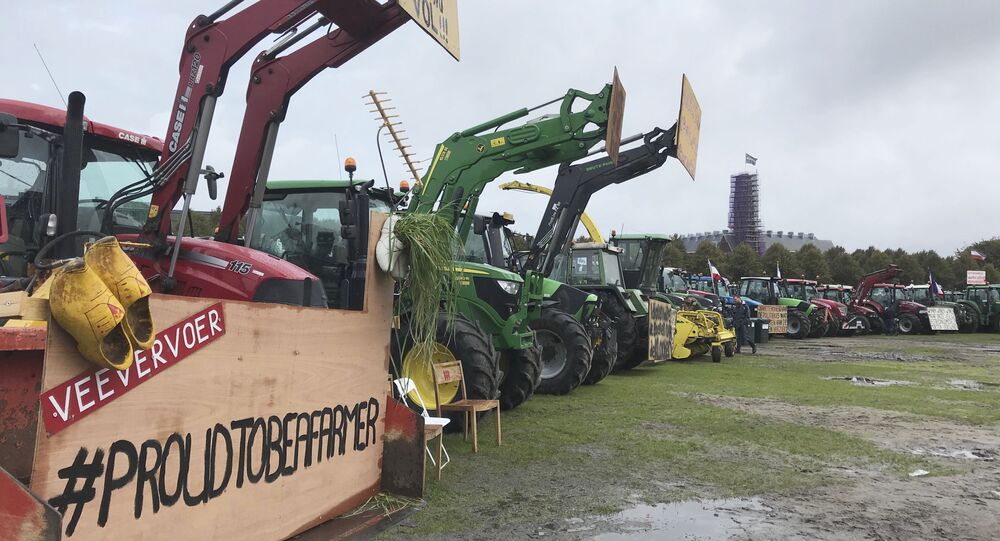 MOSCOW (Sputnik) - Dutch farmers on Thursday continued protesting against nitrogen pollution regulations near the country’s parliament in The Hague after kicking off a massive tractor rally the previous day, Dutchnews.nl reported.

After about 20,000 farmers swarmed the city on 8,000 tractors on Wednesday, some farmers camped out close to the parliamentary complex overnight to resume protests the next day, according to Dutchnews.nl.

Army vehicles were deployed and police reinforcements were brought in from neighboring Germany, Politico reported.

The current wave of protests — the third since may, when the ruling was passed — started on Monday and has already forced four of the nation's 12 provincial governments to suspend the anti-pollution measures.

The Dutch farmers protesting against climate change measures have set up a breakfast camp opposite the seat of govt, after camping out overnight in The Hague pic.twitter.com/tTSikXQLcb

​The highest administrative court in the Netherlands ruled in May that the country was in breach of EU nitrogen emissions regulations and that sweeping restrictions must be imposed on construction permits and farming activity. Politico has reported that up to 18,000 construction projects have been put on hold, with farmers maintaining that such cuts will severely impact their livelihoods.

The Netherlands has one of the most advanced agricultural sectors in the world. This plays a big part in the country's economy, which raked in $100 billion from exports in 2018. The agricultural industry, particularly livestock, produces significant amounts of nitrogen oxide emissions.