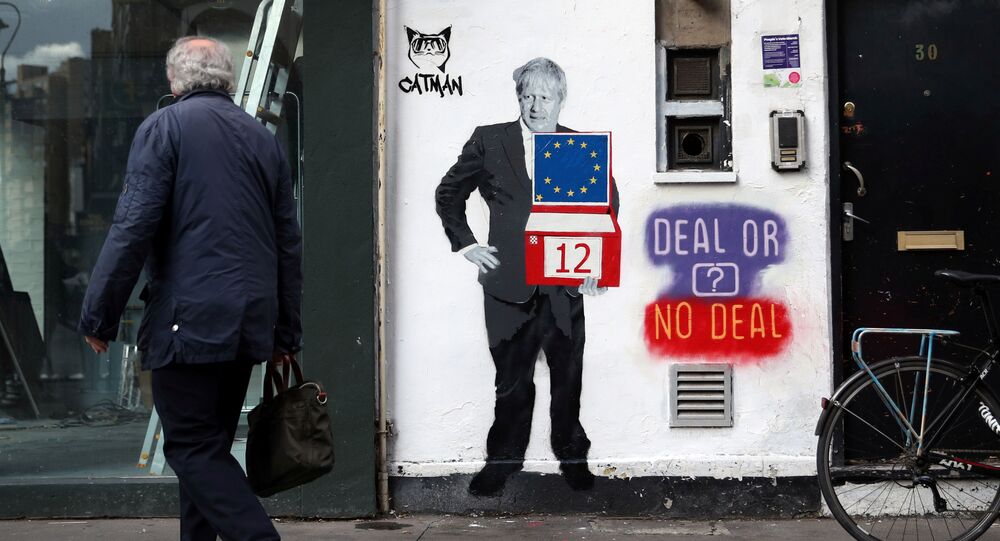 'New Deal Or No Deal': Boris Johnson To Ask EU Leaders To Rule Out Any Brexit Delay

The UK and the EU reached an agreement on Thursday morning, outlining the terms of the UK's withdrawal from the bloc, while solving the controversial Irish backstop which had seen the deal negotiated by former Prime Minister Theresa May rejected three times by UK lawmakers.

An anonymous government source has said that UK Prime Minister Boris Johnson intends to ask EU leaders to rule out a further Brexit delay, effectively providing a straight choice between Johnson's "new deal or no deal", according to BBC reporter Laura Kuenssberg on Thursday.

​The development comes as a new Brexit withdrawal agreement was agreed to on 17 October between the UK government and the European Union, with the controversial Northern Irish backstop removed.

The EU's chief negotiator Michel Barnier said that the Northern Ireland Assembly would be able to vote on applying EU rules in Northern Ireland every four years and this was "a cornerstone of our newly agreed approach".

Revisions to the original withdrawal agreement include keeping Northern Ireland in the UK’s customs territory and the UK's trade deals while allowing the UK province to remain in the single market, creating a de facto customs border down the Irish sea, something Boris Johnson previously said he would not permit.

The deal is clear NI is in UK’s customs territory & UK trade deals. UK has veto on application of EU custom fees for goods destined for Republic, as it has a right to waive customs fees. The deal respects GFA, and provides for a fair democratic consent process. I’m backing it. pic.twitter.com/gYvXuR0dER

However, the Democratic Unionist Party (DUP), whose votes are essential for the ruling Conservative Party in Parliament, has said that it cannot support the deal.

For all of these reasons it is our view that these arrangements would not be in Northern Ireland’s long term interests.” pic.twitter.com/fVquip6pEk

The Northern Irish Party released a statement saying they could not back proposals "as things stand", and subsequently said that it would be unable to back the deal

Labour leader Jeremy Corbyn said that the deal sounded "even worse" than the agreement negotiated by Johnson's predecessor, Theresa May, and "should be rejected" by MPs, despite previous reports saying he would support a second referendum on the deal.

The deal still has to win a vote in parliament on Saturday, 19 October, as legislated by the Benn act, which was passed by parliament to prevent no deal.

Despite claims by government sources, the act requires the Prime Minister to seek an extension if his deal is not agreed on Saturday.

Mr Johnson's negotiations for a new Brexit deal were predicated around removing the controversial backstop, which was negotiated between Theresa May and the EU to prevent the erection of a hard border in Ireland after the UK leaves the EU.

By removing it, he hopes to achieve the support of Tory Brexiteers and the DUP, who had previously rejected May's agreement.