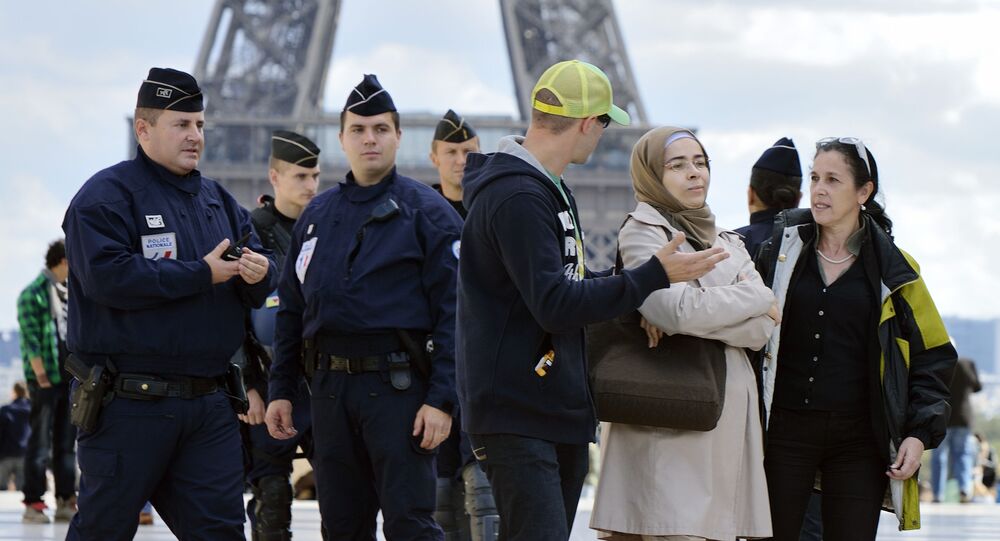 France descended into a fresh round of debate regarding the place of the Islamic headscarf in public places this week after a National Rally politician suggested that a Muslim woman accompanying her son on a school trip to a local parliament should have removed her hijab on the parliament building’s premises.

President Emmanuel Macron of France has warned against “mixing between issues of immigration, radicalization, communitarianism and secularism,” and warned that “such mixing would lead to civil war,” FranceInfo has reported, citing a source in Elysee Palace.

According to the Elysee, the president wants to avoid the “stigmatisation” of Muslims in French society. The Elysee also accused “some opposition leaders” of crossing a “yellow line,” a probable reference to Union for a Popular Movement politician Xavier Bertrand’s recent remarks on “Islamism” being “gangrene” for France.

Macron briefly touched on the headscarf debate on Wednesday following the meeting of the Franco-German Council in Toulouse, saying that while France’s laws on secularism must be respected, “we must also respect the freedom to believe and not to believe, this is secularism.”

France recently plunged into a fresh debate on the place of Islamic headscarves in public spaces after National Rally party politician Julien Odoul suggested that a regional council assembly in eastern France should have forced a Muslim woman accompanying her son on a school trip to a local parliament to remove her hijab. Odoul made his comments amid tensions in the wake of the shock killing of four Paris police officers by a radicalised Muslim colleague on October 10.

According to FranceInfo’s source, President Macron wants Minister of the Interior Christophe Castaner to continue a ‘dialogue on Islam in France’, both at the local and national level.  An unnamed close associate of the president told the outlet that Macron has not excluded a speech on public secularism, but that such a speech is not on the agenda for the immediate future.

French Prime Minister Edouard Philippe told parliament there was no need for a new law on school accompaniment to address the Islamic veil, but promised to continue fighting to “defend secularism.”

Earlier this week, a group of French public figures wrote an open letter to Le Monde calling on President Macron to publicly condemn Odoul’s remarks, and to emphasize that Muslims in general “have a place and our society” and should not be “monitored, stigmatised or denounced for the practice of their religion.”

The secular nature of the French state is governed by the 1905 law on the Separation of the Churches and the State, which provides for the freedom of religion, but also the secularism (‘laicite’) of the state. French law prohibits girls from wearing headscarves inside state schools, and state workers including teachers are not allowed to wear religious symbols in the classroom.

Armed Conflict Between French Right and Muslims – How Real is the Threat?