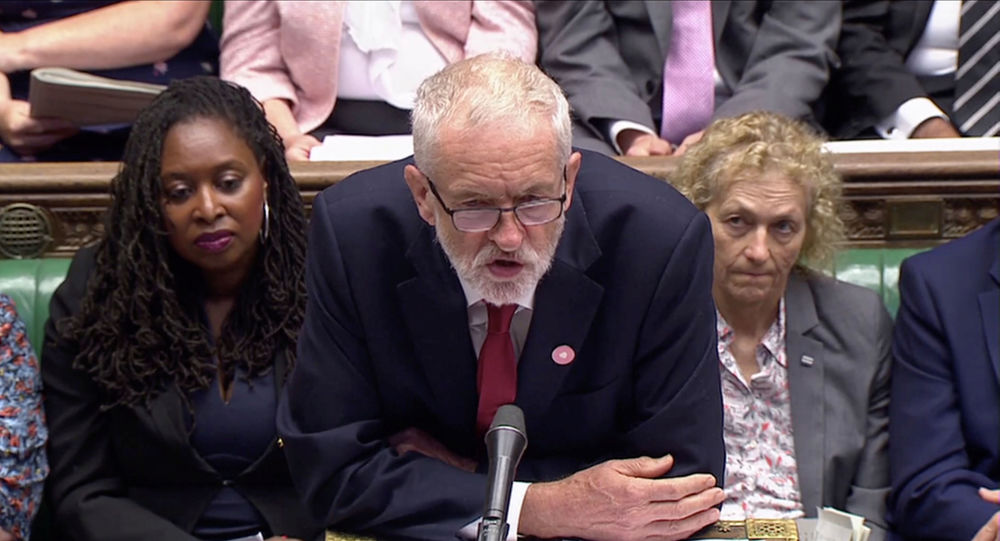 Britain's Labour Party leader Jeremy Corbyn is set to back a referendum on a new Brexit agreement, the Times reported on Thursday.

The Labour leader is understood to support backing an amendment to a new vote on a withdrawal agreement that the prime minister hopes to put before parliament on Saturday. Labour sources told the Times Corbyn intends to back an amendment that would make the Johnson deal subject to a second referendum.

The move is expected to be supported by Liberal Democrats, the SNP and 21 Tory rebels who lost the whip over supporting the Benn Act, which obliges Prime Minister Boris Johnson to request an extension if there is no deal before the official Brexit date, which is October 31.

One source said that Labour would back a second referendum if Johnson submitted a full legal text to MPs before Saturday under the terms prescribed by previous Brexit legislation.

“If a substantial deal is presented to the House and members have time enough to scrutinise it in detail we will almost certainly seek to amend it with a confirmatory ballot,” said Peter Kyle, one of two Labour MPs who came up with the proposal for a confirmatory vote.

“If it’s a skeleton deal that lacks substance and we don’t have time to properly scrutinise its meaning I suspect the House would want to punish him for being so contemptuous of parliament and strike it down outright,” he added.

Johnson will not only have to defeat the referendum move but also win a substantive vote on the deal itself, however even Hard-Brexit supporters might reject Johnson’s plan over concerns that it represents a harder Brexit than Theresa May’s previous deal.

According to sources cited by the Times, former ministers Philip Hammond, Amber Rudd and David Gauke are worried about the new political declaration that forms the basis of Britain’s relationship with the European Union. “They want something that works for the whole of the UK, that doesn’t weaken it,” a source said. “Their support is not a given. They want to see the declaration first.”

Another source told the Times, however, that many MPs would vote “for anything Johnson came back with.”

Opposition MPs are also preparing to force Johnson to leave open the option of a Brexit delay even if he succeeds in getting a deal through the Commons, trying to push an amendment that will make the passing of the vote conditional on the legislation needed to implement Brexit coming into force. As a result, Johnson could still be forced to request an extension of the Article 50 process under the Benn Act.