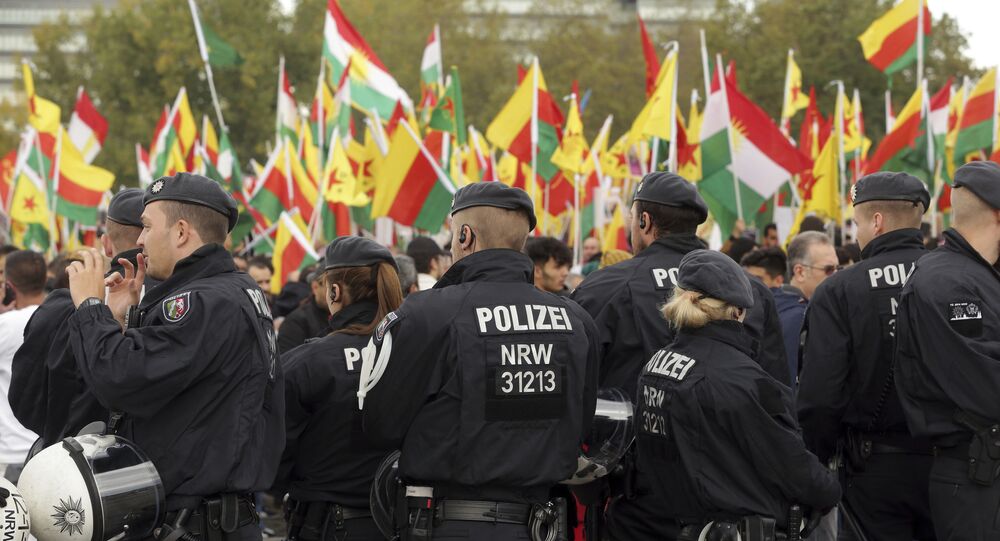 MOSCOW (Sputnik) – Around 20,000 Kurds took part in protests across Germany against the Turkish military operation against Kurdish units in Syria, German media reported.

According to the ZDF broadcaster, over 10,000 people joined on Saturday the rally in the city of Cologne, some 4,000 in Frankfurt, some 3,000 in Hamburg and Hannover each. Smaller demonstrations took place in Bremen, Berlin, and Saarbruecken.

The protesters called for political pressure on Turkey and chanted slogans in support of Syrian Kurdistan.

Demonstration against #KurdishGenocide today in Cologne
Rise up for the #Kurds and #Rojava pic.twitter.com/UkXyESKuUZ

Police warned the protesters that during the rallies they could not use flags of the Kurdistan Workers’ Party (PKK), banned both in Turkey and Germany, as well as photos of its founder, Abdullah Ocalan.

On Wednesday, Turkish President Recep Tayyip Erdogan announced the launch of military offensive dubbed 'Operation Peace Spring' in northern Syria against the Daesh terrorist organization and the PKK, which Ankara designates as terrorists.

The air stage of the operation has begun the same day in the Ras al-Ain town of Al Hasakah province, while the land operations have been launched shortly after.

The Turkish offensive in northern Syria is part of Ankara's long-standing goal to clear its border area of both Kurdish militia and Daesh terrorists and create a so-called safe zone along the cleared line.

The military operation has already resulted in civilian deaths on both sides of the border. Damascus views the operation as a violation of Syria's territorial integrity.

The offensive was also condemned by the Western countries, including Germany, whose Foreign Minister Heiko Maas announced earlier a ban on arms supplies to Ankara.