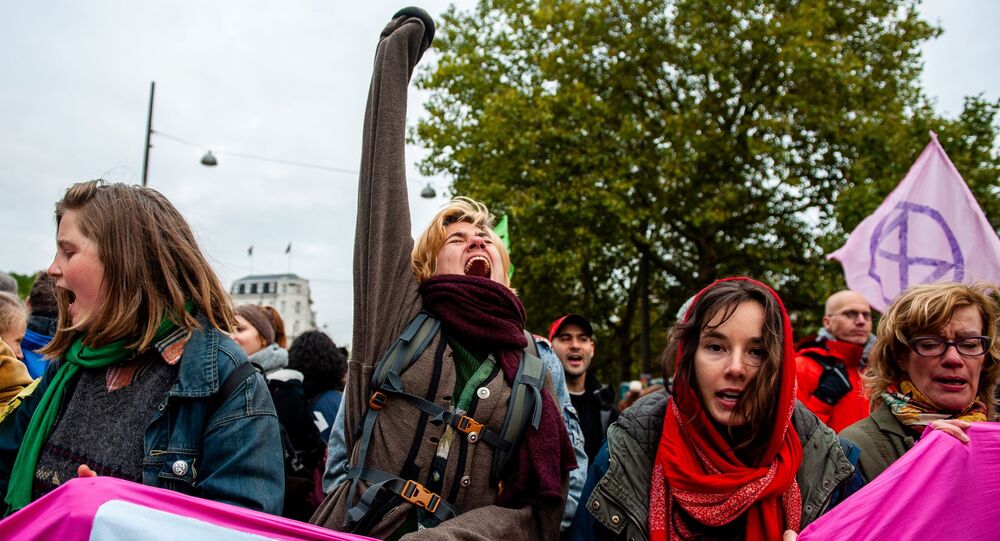 Rallies began at 9:00 GMT on Thursday, with protestors sitting in front of the terminal's main entrance and some being forcefully removed from the airport's foyer.

Extinction Rebellion (XR) protestors have caused headaches for travellers and staff at London City Airport on Thursday as they launched a three-day occupation aimed at mirroring "Hong Kong-style" demonstrations abroad.

The London City Airport tweeted early on Thursday that it had confirmed "a number of protestors" had arrived at the airport and that they were working with the Met Police. LCA authorities were also implementing boarding pass checks at the terminal entrance "due to the threat of protestor activity".

One XR activist managed to climb and glue himself on top of a British Airways plane. According to the group, the man is a former Paralympic bronze medal winner at the London 2012 games, Telegraph breaking news editor Garreth Davies tweeted.

​Numerous protestors were seen being dragged by police from the Airport. One activist was also arrested on a flight on the runway, with numerous others arrested outside the airport, the Metropolitan Police said in a statement.

One person boarding his flight recorded footage of a climate change protestor who "infiltrated" his flight.

Deputy assistant commissioner, Lawrence Taylor, said that the Met's policing plan was aimed at "preventing criminal activity which poses a significant safety and security risk to the airport," adding that authorities were "determined" to deal with protestors "robustly but proportionately".

Mr Taylor said: “Targeting an airport and inconveniencing travellers in this way is wholly unacceptable and irresponsible. The consequences of committing offences at airports are serious; individuals breaking the law are being, and will continue to be, arrested and prosecuted where appropriate.

According to the Met Police, as of Thursday, 842 arrests tied to Extinction Rebellion protests have taken place across London. 29 people were also charged with offences such as obstructing motorways and "failing to comply with with a condition imposed under Section 14 of the Public Order Act 1986", a press release said.

XR protestors launched their two-week-long 'International Rebellion' series of rallies across Europe, the US and other locations on Monday, where protestors have begun disrupting infrastructure such as roads, motorways, and bridges. The movement began in May 2018 and resurfaced in July this year, with activities taking place across over 60 cities worldwide. Activists have called upon international governments to tackle climate change and ecocide, among others.

Activists were encouraged to lie, sit or glue themselves on to departure and arrival gates, according to an XR press statement, and also blocked entries to DLR stations and access roads in order to block "noise-misery" and "climate-deadly pollution", adding that the airport was being used 'disproportionately' by the "polluter elite" in the City of London.