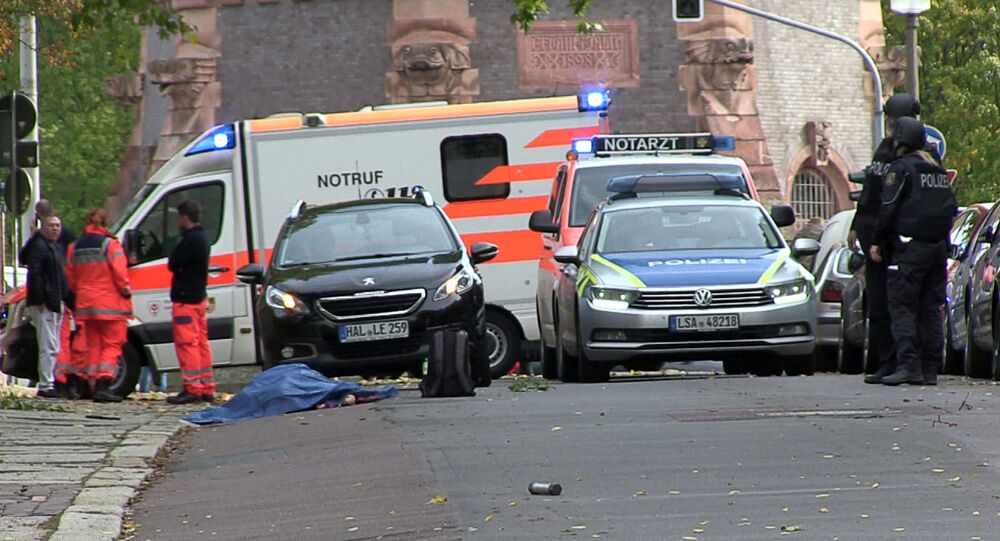 What is Known So Far About Deadly Synagogue Shooting in Germany

The incident, which reportedly claimed the lives of two people and injured two more, comes amid celebrations of Yom Kippur, the holiest day in the Jewish calendar.

Local police have reported that at least two people had been killed in Wednesday’s shooting near a synagogue located in the eastern German city of Halle.

“Our forces have detained one person. We remain alert, however. We have deployed forces in and around Halle and are trying to stabilise the situation until we have all the relevant information, the Halle police tweeted, adding that several shots were fired during the incident.

The police urged locals to stay in their homes, giving no other information on the incident.

The railway station in Halle was closed down as a precautionary measure amid the ongoing police operation.

How the Shooting Reportedly Took Place

CNN cited Halle police press officer Thomas Mueller as saying that the shooting took place in the vicinity of Humboldtstrasse, the same street as the synagogue, and that two people had been injured in the incident.

An unnamed eyewitness was quoted by CNN as saying that they heard several shots around 12:15 p.m. local time (6:15 a.m. ET) on Wednesday.

#BREAKING An alleged footage from the shooting in #Halle. Reports that the attacker/s had also fired shots into a kebab shop pic.twitter.com/ziDxCCAdwS

They added that shortly after, a car was seen driving away at high speed in the direction of the nearby street of Schillerstrasse.

The perpetrators, who are thought to have fired several shots with a submachine gun, are said to be currently on the run and heading in the direction of Leipzig, Bild reports.

A separate person told the German TV channel n-tv that he had been in a local kebab shop when he saw a man with a helmet and military jacket allegedly firing shots into the shop.

One of the shooters with a interesting helmet? Apparently a Nazi Stahl Helmet. Shooting at a Synagogue and a Kebab shop doesn't feel like Muslim terror. #Halle pic.twitter.com/ErL4mx6z9I

The shots were also reported in Landsberg located about 15 miles (24 kiliometres) from Halle. It remains unclear if the incident is related to the Halle shooting.

Government spokesman Steffen Seibert has, meanwhile, expressed hope that “the police will be able to arrest the perpetrator or the perpetrators as quickly as possible and that no other person will be endangered".

He also underscored the importance of the local population following the instructions of the police.

The attack coincided with Yom Kippur, the main Jewish holiday which this year is celebrated on 8-9 October.

Also known as Day of Atonement, Yom Kippur is respected by a majority of Jews, even non-religious ones, who traditionally observe the day with an approximate 25-hour period of fasting and intensive prayer, often spending most of the day in synagogue services.