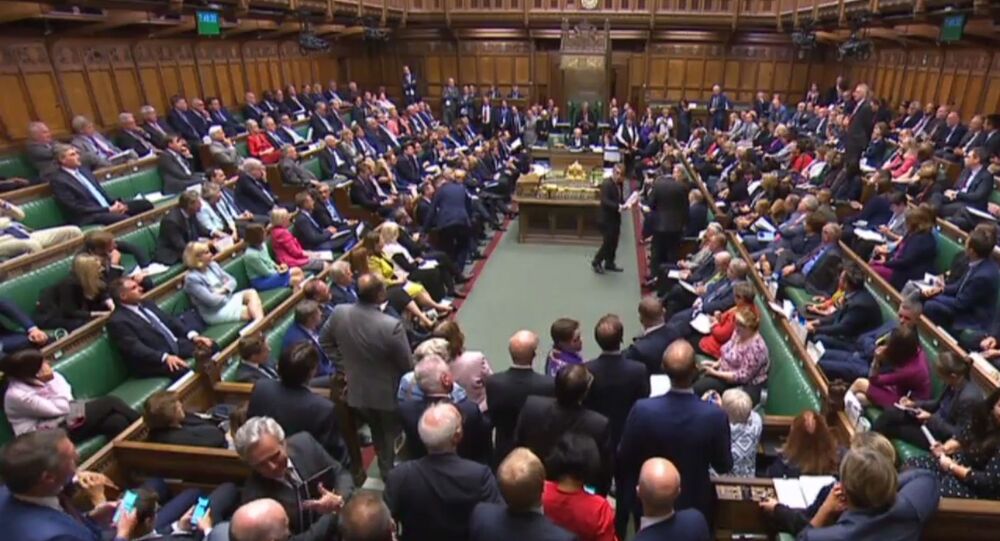 UK Prime Minister Boris Johnson was among the main pro-Brexit figures before the 2016 referendum and has remained a staunch believer that an exit from the EU will be beneficial to Britain. Since assuming office in July 2019, however, he has been unable to present a comprehensive deal with the EU and faces a strong challenge to his leadership.

As the October Brexit deadline looms, Johnson reportedly now faces a new rebellion of UK cabinet members over his no-deal Brexit. According to The Times, at least five cabinet ministers have been put on a "resignation watch list".

According to The Times, citing sources, a "very large number" of Conservative members of parliament will also quit if it comes to a no-deal Brexit.

"Cabinet will set the strategy, not unelected officials. If this is an attempt to do that then it will fail", another unnamed cabinet minister said, cited by The Times.

On Tuesday evening, the UK Parliament completed the longest session in its history and went on a short vacation until 14 October, when Queen Elizabeth II is expected to open the new session.

Johnson previously asked the Queen for a long prorogation of Parliament. The opposition saw this as an attempt to block Parliament from participating in Brexit decision-making. The UK Supreme Court ruled that the prorogation is illegal.

Brexit was initially supposed to have happened on 29 March but was postponed to 31 October amid the UK government's failure to negotiate divorce terms. Johnson is determined to leave the European Union by the deadline, even in the case of a no-deal scenario, which could result in significant economic fallout.

Last week, Johnson revealed a new plan to replace the previously-rejected Irish border backstop in a bid to ensure that the United Kingdom leaves the European Union after the October 31 deadline with an agreement. In particular, the new proposals revolve around the creation of an all-Ireland regulatory framework on cross-border trade, something that would ideally ensure Northern Ireland exits the EU customs union along with the rest of the UK while still ensuring compliance with European standards on goods.

The proposals have been criticized both in the European Union and in Ireland. While Brussels said the proposals lacked a basis for clinching a deal, Dublin insisted that the plan fell short in many aspects.

EU ‘Might Not Be Inclined’ to Accept Further Brexit Delay - Journalist