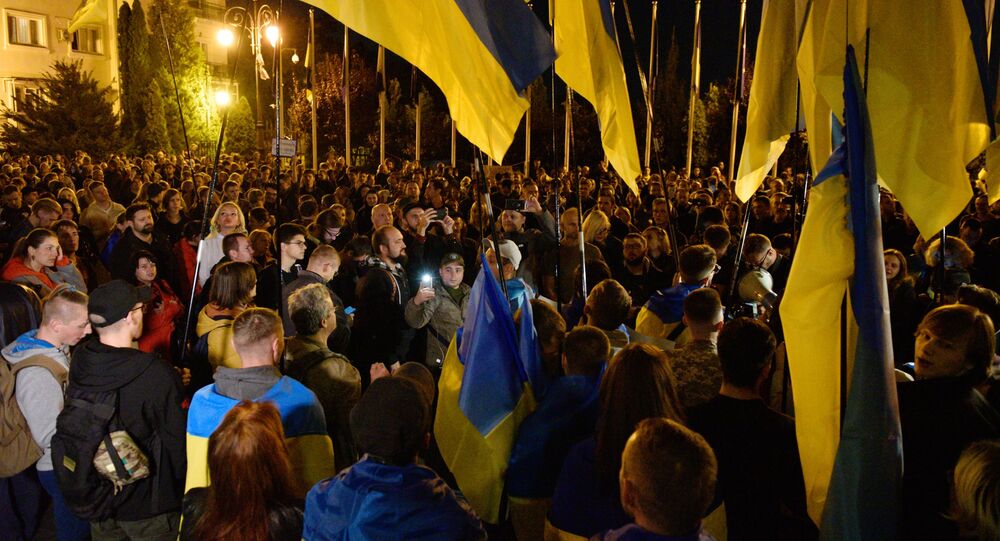 KIEV (Sputnik) - Thousands of protesters unhappy with a peace plan that seeks to give wider autonomy to parts of eastern Ukraine, known as the Steinmeier formula, gathered in Kiev’s Independence Square on Sunday, police said.

"There are around 10,000 people there now. There have been no violations [of public order]", the city police’s press office said on its official Facebook page.

The demonstrators held a so-called veche, a popular assembly, where they agreed to stop the Ukrainian government’s perceived "capitulation" to independence supporters in the eastern Donetsk and Lugansk provinces.

Territories controlled by the self-proclaimed people’s republics of Donetsk and Luhansk have been promised autonomy if they hold elections under Ukrainian laws. The plan is dubbed "the Steinmeier formula" after Germany’s president and ex-foreign minister, Frank-Walter Steinmeier, who proposed it.

Organisers of Sunday’s protest said the rally was a warning to the Ukrainian president, Volodymyr Zelensky, who had said he respected the people’s right to protest but urged them not to give in to provocations.

Demonstrators demanded in turn that Zelensky resign and promised to protect national interests. The protest was attended by many politicians on the right of the political spectrum.

Oleh Tyahnybok, the leader of the nationalist Freedom Party, called for a bigger rally on 14 October. After the assembly ended, a smaller group of protesters lit up flayers and marched to the president’s office to demand that he does not "cross red lines" in the resolution of the Donbass conflict.

A conflict erupted in eastern Ukraine in 2014 after a coup in Kiev put a new government in charge, which sent troops east in a bid to quash a pro-independence uprising. The leaders of Ukraine, Russia, France and Germany have been holding talks in an effort to end the war.