UK Prime Minister Boris Johnson is poised to unveil his Brexit plans for a new deal, with the EU expected to bypass the contentious Irish backstop issue after leaked proposals heightened concerns over a return to a hard border. The prime minister dismissed the fears, promising a “very good” Brexit plan.

UK Prime Minister Boris Johnson is expected to detail later on Wednesday what he describes as a “fair and reasonable compromise” in his keynote speech to the Conservative conference in Manchester, setting out new Brexit proposals for the contentious Irish border issue, reported the Independent.

Johnson is also expected to issue a “take it or leave it” ultimatum to Brussels on Wednesday, warning he will take the UK out of the EU on 31 October without a deal if it is rejected, said Downing Street.

Addressing the Tory Conference, Boris Johnson is expected to say:

“Voters are desperate for us to focus on their other priorities. What people want – what Leavers want, what Remainers want, what the whole world wants – is to move on. That is why we are coming out of the EU on 31 October. Let’s get Brexit done – we can, we must and we will.”

Per the Independent, a senior No 10 official added the government was either going to negotiate a new deal or work on no deal, adding:

"Nobody will work on delay. We will keep fighting to respect the biggest democratic vote in British history."

The newly-drafted legal text to be handed over soon after Johnson’s speech is believed to include the £39bln financial settlement agreed to by former UK PM Theresa May, along with protections for expat EU and UK citizens.

However, it will demand the scrapping of the proposed “backstop” for the Irish border, as Johnson has insisted there will be no physical border infrastructure in Northern Ireland.

Theresa May's thrice-defeated withdrawal agreement, claimed by Brussels to be the only acceptable one, contained a “backstop” which would keep Northern Ireland in the EU's Customs Union and Single Market and ensure that no hard border is erected in Ireland.

In a shift from Theresa May’s promise, Johnson’s option is that customs checks would be on both sides of the border, but possibly at the premises of exporters and importers. 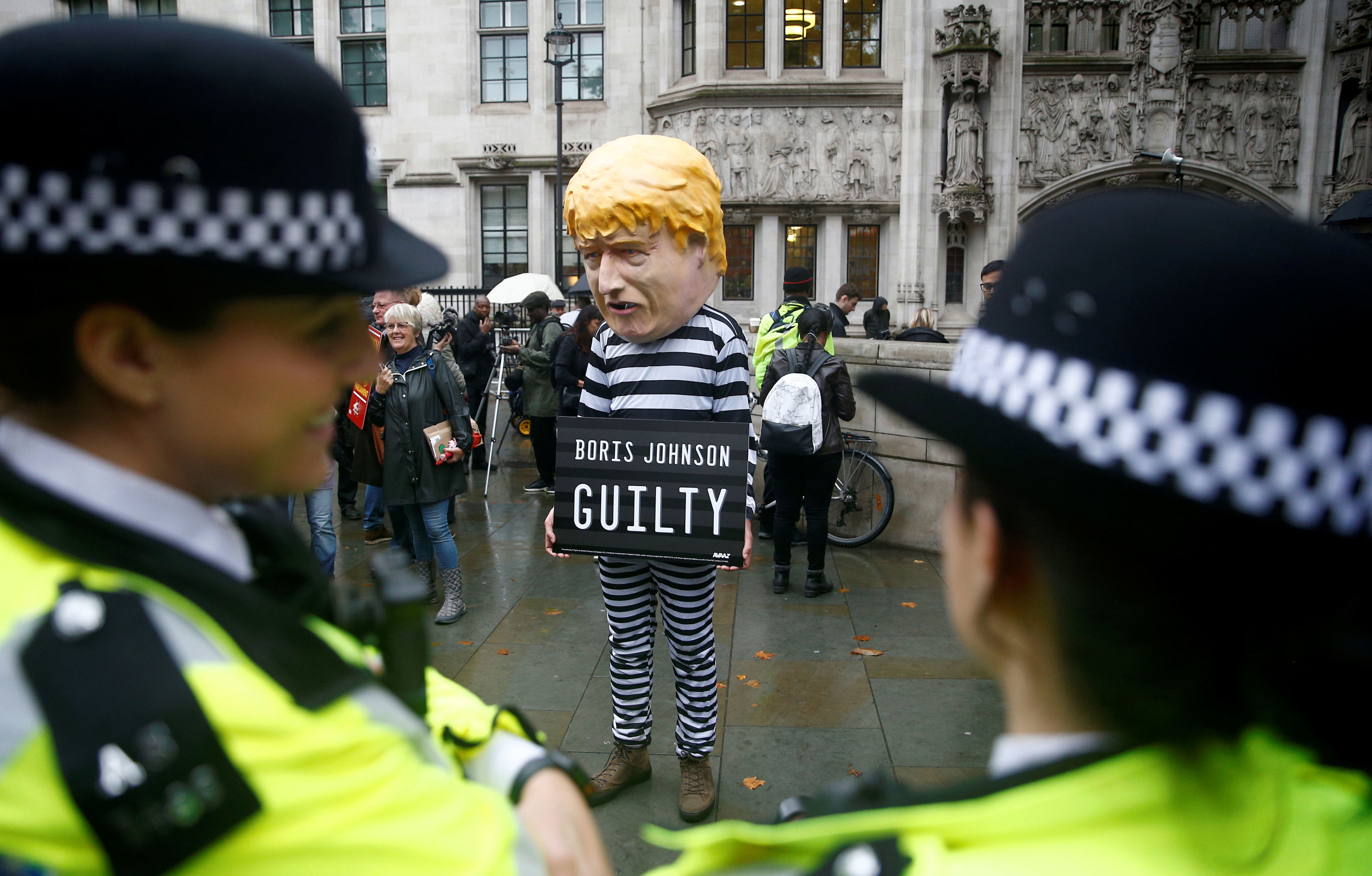 © REUTERS / HENRY NICHOLLS
A protester stands outside the Supreme Court of the United Kingdom after the hearing on British Prime Minister Boris Johnson's decision to prorogue parliament ahead of Brexit, in London, Britain September 24, 2019

The UK offer, according to reports, suggested provisions for Northern Ireland to follow EU single market rules for agricultural and industrial goods for four years after the end of the expected transition period in 2021.

Northern Ireland would at the end of that four-year period in 2025 be free either to move closer to Great Britain’s trading arrangements at the cost of a harder border with the Republic, or continue with the existing arrangement, according to sources cited by the Daily Telegraph.

Earlier, Prime Minister Boris Johnson denied his government intended to install customs clearance zones close to the Irish border after Brexit to circumvent the controversial backstop arrangement, after a leaked plan proposing such a provision appeared in the Irish media.

In a spate of interviews on 1 October, Johnson stated the documents were “not quite right”, adding his administration had fashioned a “very good” Brexit plan, all set to be laid out before Brussels in the next few days.

The Prime Minister also emphatically dismissed the Benn Act - legislation ordering him to seek a delay to Brexit if unable to secure a deal with Brussels by the end of 2019 as a “constitutional novelty” and “surrender act”.

The Irish border backstop has been a key stumbling block in Brexit negotiations.

Johnson has insisted that the backstop must be scrapped, while the EU wants to keep it as an insurance policy in UK-EU Brexit talks to guarantee there is no hard border between UK's Northern Ireland and the Republic of Ireland, an EU member state.

To date, Brussels has accused the UK government of failing to provide any viable proposals.