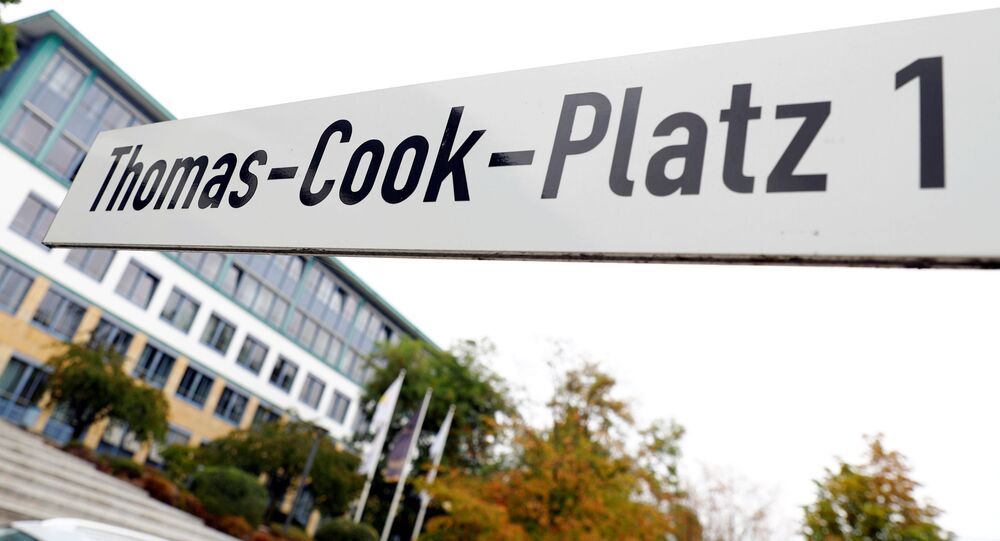 Last week, the Thomas Cook Group announced its compulsory liquidation following failed talks between the company's stakeholders and potential new donors on terms which would have allowed for the firm's recapitalisation and reorganisation. All of the company's bookings, including flights, were immediately cancelled.

The UK Civil Aviation Authority (CAA) has said it intends to repatriate 8,000 stranded travellers on Monday following the forced liquidation of Thomas Cook Group. According to the CAA, 53 flights will be dispatched to fly people to their destinations.

Last week, UK travel company Thomas Cook announced its forced liquidation after it failed to obtain funds to save it from having to file for bankruptcy. The company had been negotiating the terms of debt restructuring with its main shareholder, but the talks reached an impasse.

© AP Photo / Alastair Grant
John Garret from Boston Ma., who was supposed to be flying to Malta, takes a photo of the empty Thomas Cook check in desks in Gatwick Airport, England Monday, Sept. 23, 2019.

More than 600,000 holidaymakers around the world were forced to cancel the booking of tickets due to the company's collapse.

Thomas Cook has been experiencing financial troubles for a long time; it has cited political unrest in places of rest and the refusal of holidaymakers to book trips due to Brexit as the reasons for its problems.