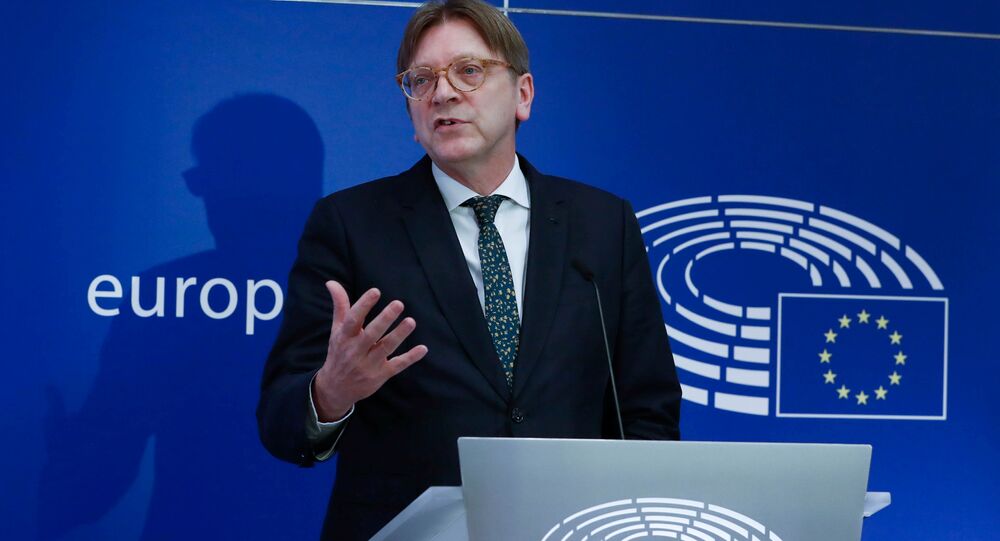 UK Prime Minister Boris Johnson has been accused of dangerously inflaming political tensions and blasted for his use of language that his opponents claim could “incite violence” against them, as he still hopes to press ahead with securing a Brexit deal before the 17 October European Council crunch summit against the backdrop of political turmoil.

European Parliament Brexit Coordinator Guy Verhofstadt had suggested Brexiteers like UK Prime Minister Boris Johnson and Leader of the House of Commons Jacob Rees-Mogg could end up “on the guillotine” earlier in the year, months before the current political turmoil over claims regarding their “inflammatory” language, and that  terms such as “surrender” and “betrayal” were a danger to the lives of anti-Brexit MPs, reports Breitbart.

In February, the former Belgian prime minister predicted that Johnson and Rees-Mogg could suffer a similar fate to that of the leaders of the French Revolution, who were executed on the guillotine.
Verhofstadt attacked Conservatives for rejecting attempts at forming a cross-party consensus with Labour to break the Brexit impasse in the House of Commons:

“I know that in the Tory party the hard Brexiteers are compared to the leaders of the French Revolution. I think [Michael] Gove is Brissot, Boris Johnson Danton, Jacob Rees-Mogg Robespierre. But we should not forget that the efforts of these men were not appreciated by the common men they claimed to represent because they all ended up at the guillotine,” the European Parliament’s Brexit Coordinator was quoted by The Telegraph as saying in Strasbourg in February.

UK Prime Minister Boris Johnson has defiantly refused to tone down his rhetoric after being accused this week of resorting to “inflammatory” verbal attacks as he repeatedly described legislation requiring him to ask for yet another Brexit delay as a “Surrender Act”, and accusing Remain MPs of “betraying” a public which voted to leave the European Union in 2016.

Amber Rudd, who quit the government and resigned as the Conservative whip earlier this month to protest the prime minister’s policies, joined a chorus of voices condemning Johnson’s aggressive use of language, warning it could incite violence against opponents.

Rudd was quoted by The Guardian as saying:

Amid the increasingly toxic political atmosphere, the Conservative Party’s annual conference opened as planned under the “Get Brexit Done” slogan, despite MPs rejecting the government’s request for a three-day parliamentary recess during the gathering in Manchester, with Johnson’s speech — the traditional finale to the conference — reportedly set for the morning of 2 October.

The conference opened just days after the Supreme Court’s ruling that Boris Johnson’s five-week suspension of parliament was unlawful, and the order was "void and of no effect".

The escalating tensions could lead to snap elections in the country by the end of the year.

The prime minister reportedly still hopes to press ahead with securing a Brexit deal in the brief window remaining before the 17 October European Council summit and push it through parliament.

Speaking at the BBC’s The Andrew Marr Show Johnson said there was still a chance of reaching a deal with the EU but that efforts were not helped by the Benn Act.

“Obviously the chances of a deal or no deal depend very much on the common sense of our friends and partners. It has not been helped by the surrender act”, said Johnson.

The legislation, spearheaded by Labour MP Hilary Benn, and backed by Labour and rebel ex-Tories, demands that the prime minister ask Brussels for an extension to the Brexit process by 19 October if he has not brokered a new agreement.

On October 31, the UK will separate from the EU, most likely without a deal, unless Johnson is able to secure a third extension.

'UK Should Walk Away From the EU Now' - Politician