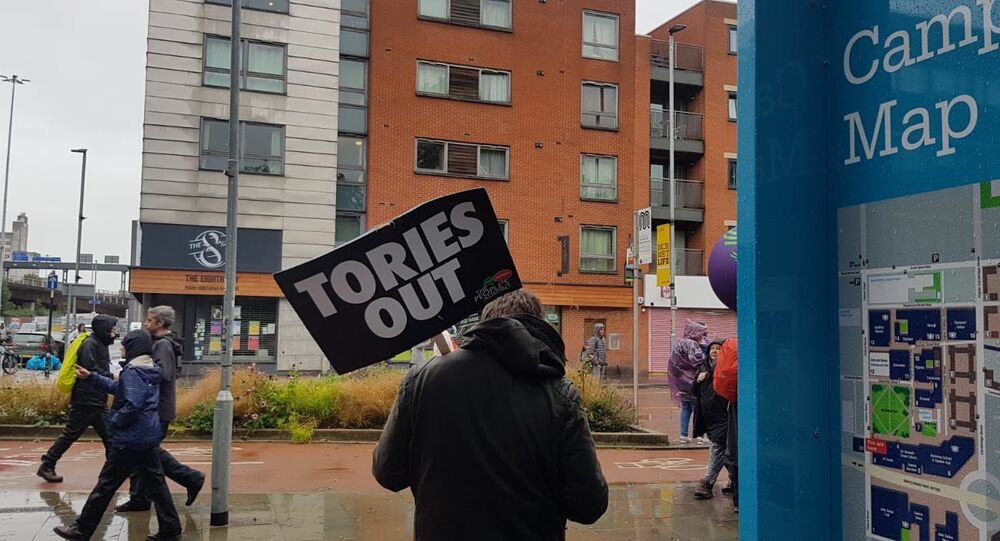 Protesters Gather in Manchester as Conservative Conference 2019 Kicks Off - Photos

The Conservatives opened their four-day party conference in Manchester on Sunday, with ministers announcing plans to invest £2.6bn across NHS Trusts in England. Outside the event, protestors from across Britain gathered at a series of rallies demanding a new government and an end to austerity.

The protest, organised by the People’s Assembly Against Austerity (PAAA) pressure group, saw crowds of demonstrators march their way through the English city of Manchester, the centre of the government’s Northern Powerhouse, as the Conservatives launched their annual party conference.

The march kicked off at All Saints Park on Oxford Road in the heart of the city, before finishing at Cathedral Approach, where speakers including the TUC General Secretary Francis O'Grady, actress Julie Hesmondhalgh, and Shadow Education Minister and Labour MP Angela Rayner addressed the crowd.

It coincided with a "Reject Brexit, Defend Our Democracy" rally, organised by two pro-Remain pressure groups, Manchester for Europe and March for Change, as well as a TUC union demonstration supporting Thomas Cook staff who lost their jobs last week when the company went into liquidation.

Trade unions branding, EU flags and a variety of campaign placards provided shelter from the wet and windy weather, as well as unifying anti-government frustrations from a diverse range of activist groups. Anti-Brexit sentiments were particularly strong in the city that famously voted to remain within the European Union back in the 2016 EU referendum.

Despite the decision to remain in 2016 and the ongoing Brexit deadlock, protestors were keen to point out that it wasn’t just the government’s handling of Brexit that they were demonstrating against.

“Today’s protest means making a stand against this corrupt government. Their policies are awful and they need to be stopped”, Mike, a technician, said.

“I study at MMU and live around the corner from this march. I came down to see what it [the march] was all about. I’m probably going to see this march go through town because it’s interesting. I think people are very angry at the moment with quite a lot of things so today’s march is a little bit of melting pot for that”, Adam, a student, commented.

“I’ve come from the Wirral and I’m appalled at the local Labour Party [in the Wirral] because it doesn’t act strongly enough about what’s going on so I’m just making an individual protest here coming to back up these thousands of people”, Peter, a pensioner remarked.

Slogans and banners attacked incumbent Prime Minster Boris Johnson and his Brexit strategy after a series of parliamentary defeats and the recent ruling from the Supreme Court last week, which labelled the prorogation of Parliament unlawful – the prime minister’s authority and strength in Parliament has since been severely weakened.

The result of these recent defeats has led to opposition groups and even lawmakers in the Conservative Party calling for a vote of confidence in the prime minister and raising the possibility of a general election.

It remains unclear whether Boris Johnson will give his speech in Manchester on Wednesday, after the House of Commons voted to continue sitting amid the prorogation row, with efforts by the prime minister to suspend Parliament amid the Conservatives’ conference having been rejected. Johnson is due to attend Prime Minister's Questions at the same time on Wednesday.

Lawmakers, party members, and representatives from business are just some of the groups attending this year’s Conservative Party Conference – an event worth an estimated £32m to Manchester’s economy.

Over the next four days, the party will be unveiling new government policy as well as commitments to Brexit, protecting the union amid a growing appetite for Scottish Independence, and statements on the opposition Labour Party and its leader Jeremy Corbyn.