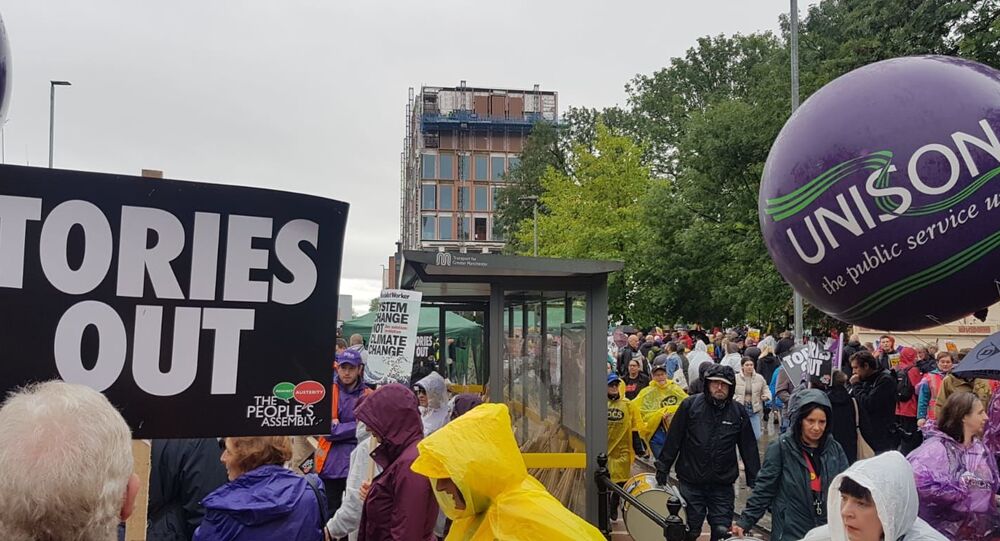 The People’s Assembly Against Austerity (PAAA) group says that austerity is “the most destructive force in Britain today” and is now the biggest issue faced by people in the United Kingdom.

Thousands of people from across the country take to the streets of Manchester for protests against austerity, reports say.

The anti-austerity rally began outside All Saints Park on Oxford Road at midday and is set to end at Cathedral Approach, according to organisers.

Meanwhile, the march Reject Brexit, Defend Our Democracy starts at Whitworth Park on Oxford Road and then pass by the Tory Party Conference to a rally at Castlefield Bowl, the reports say.

On 4 September, UK Prime Minister Boris Johnson suggested holding early elections on 15 October after the Parliament, despite his pleas, changed the legislative body's agenda to urgently consider a bill aimed at preventing a no-deal Brexit on 31 October. Parliament then rejected Johnson's call for an early election, but it is expected to vote on the proposal once again today. Earlier the same day, the bill aimed at blocking a no-deal Brexit became law after receiving the formal assent of Queen Elizabeth II.

Since the beginning of his tenure, Johnson has promised that the United Kingdom will withdraw from the EU with or without a deal. The prime minister has insisted that the backstop plan should be excluded from the previously agreed London-Brussels deal. EU leaders, however, have opposed reviewing the agreement. Johnson, in response, announced preparations for a possible no-deal Brexit, adding, though, that he would try to negotiate a new deal with the European Union.