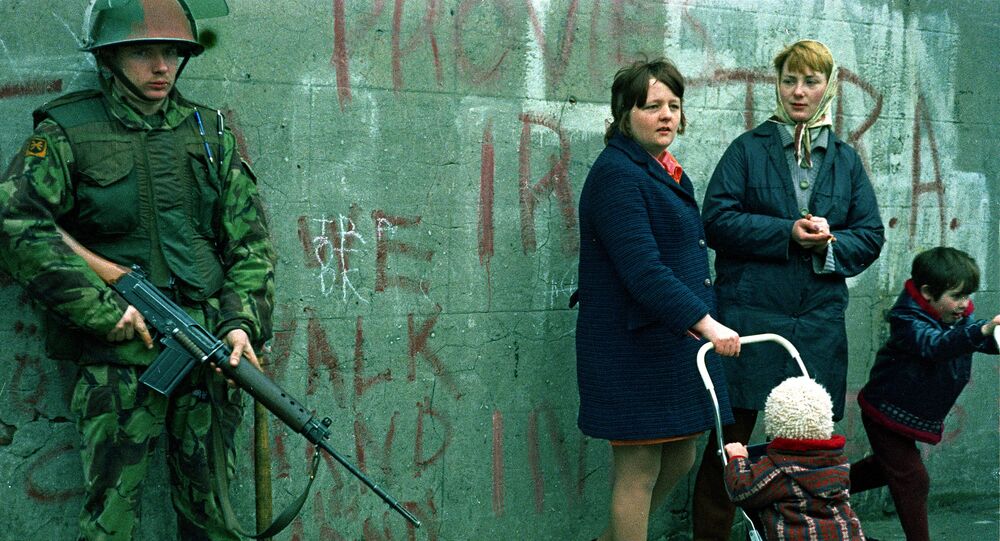 Raymond McCord, 22, was beaten to death by loyalist paramilitaries in 1997 and dumped in a quarry at Newtownabbey, just outside Belfast. He was one of 3,600 people killed during The Troubles in Northern Ireland. Now, his father, also Raymond, thinks a no-deal Brexit will have a disastrous effect on the country.

A man whose son was murdered by the Ulster Volunteer Force during The Troubles has said a no deal Brexit threatens to send Northern Ireland back into the abyss of violence.

Raymond McCord says: “I have concerns with Brexit, and particularly a no deal Brexit, that it will encourage people to get involved in terrorism and we will go back to the bad old days of sectarian warfare and that’s the last thing that I want and most people in Northern Ireland, whether they are unionist or nationalist, feel the same way.”

Last week Ronan Lavery QC, a barrister hired by Mr McCord, addressed the UK Supreme Court during the hearing about the prorogation of Parliament.

Mr Lavery said a no-deal Brexit would lead to "the erection of a border" on the island of Ireland, which could trigger a resumption of violence by Irish republicans who are intent of unifying the island despite the opposition of the loyalist majority in Ulster.

​Mr Lavery said the European Union was a “peace project” which had avoided the need for a hard border between the UK and the Republic of Ireland.

Mr McCord said: “I believe being in Europe has helped us a lot and leaving will have an adverse effect.”

Dissident Irish republicans have planted several bombs in recent months and Mr McCord said if there was a hard border then members of the security forces manning those checkpoints would be obvious targets.

“But it’s not just attacks on the Irish border. If (DUP MP) Sammy Wilson believes that people just want to fire shots at a border post he lives in cloud cuckoo land. They will try to make a point,” said Mr McCord, who said he feared another bombing atrocity like that at Omagh in 1998, which killed 29 people.

Mr McCord pointed out 56 percent of people in Northern Ireland voted to Remain in the European Union and he said that number clearly included unionists and Protestants as well as people from the Catholic, nationalist community.

© AP Photo / Peter Morrison
A man walks past a mural from the loyalist terror group the Ulster Volunteer Force in Belfast, Northern Ireland, Thursday, May, 3, 2007.

But he said the Democratic Unionist Party (DUP) seemed hellbent on delivering a no-deal Brexit, even if it endangered peace in Northern Ireland.

Asked why people still voted for the DUP, Mr McCord said: “They play the orange card and Sinn Fein play the green card. Protestants will vote for the DUP because of a policy of fear.”

The Troubles was a period between 1969 and 1998 when the Irish Catholic minority rose up and demanded civil rights and a united Ireland. The Provisional IRA shot and bombed members of the security forces and loyalist pro-British paramilitaries assassinated IRA members and innocent Catholics in retaliation.

The IRA eventually agreed to a ceasefire and their political wing, Sinn Fein, signed the Good Friday Agreement which agreed to power-sharing, a release of prisoners and the potential for a border poll one day.

In November 1997 Mr McCord’s son, also called Raymond, was found beaten to death in a quarry.

Who decided that Raymond McCord passed the merit test for legal aid for the Supreme Court? DoJ need to answer that important question. It is clear that not only was the case without merit, but it wasn’t even relevant to the case which McCord tried to intervene in.

​The family had been involved in a feud with one loyalist paramilitary group, the Ulster Defence Association (UDA), but it later became clear young Raymond, an RAF radar operator, was killed on the orders of UVF boss Mark Haddock, who was later revealed to be a Special Branch informer.

Five months after Raymond’s death the Good Friday Agreement was signed and The Troubles officially came to an end, although the UVF did not decommission its weapons until 2009 and earlier this year Dawn Purvis, a former leader of the UVF’s political wing, said the organisation “hasn’t gone anywhere.”

Mr McCord said: “Raymond wasn’t the first person they murdered. They had a rule of terror and they were working for the state as Special Branch informers. Nobody has ever been brought to justice. I’m still waiting for an inquest 22 years later. The state has a lot to answer for.”

Parliament has resumed this week following the Supreme Court ruling but an unapologetic Boris Johnson refused to change his strategy and blamed MPs for “not getting Brexit done”.

Mr McCord said he was not optimistic about the political situation.

“Nobody knows what is happening. Parliament is completely divided. The DUP are supporting a right-wing Tory government who don’t care about the working class unionist community in Northern Ireland,” said Mr McCord.