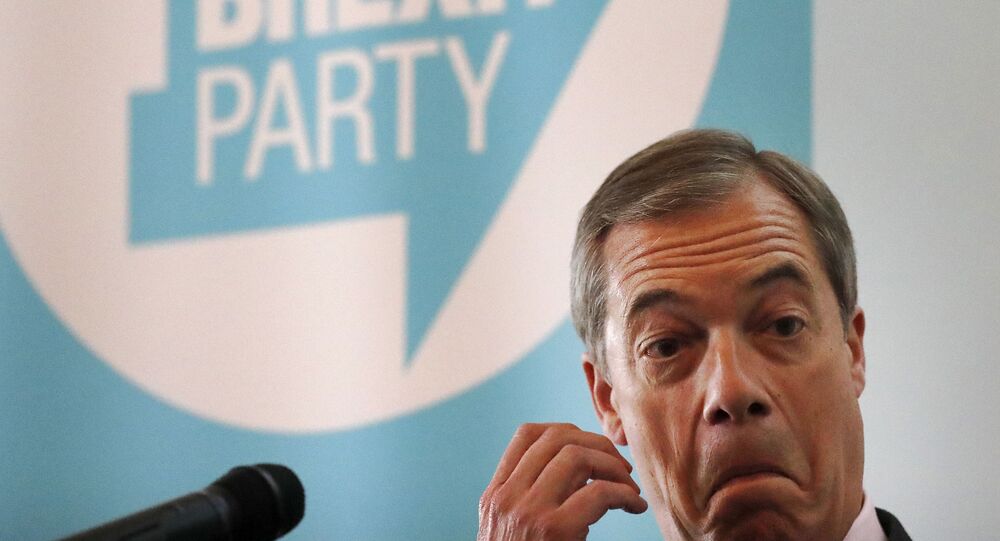 Farage Changes Tune On Prorogation: From 'Very Normal' To 'Worst Political Decision Ever'

The UK Parliament will reconvene on Wednesday after the Supreme Court ruled on Tuesday that the prorogation called by Prime Minister Boris Johnson is unlawful. The announcement has been met with accusations that Johnson lied to the Queen and calls for him to step down.

Nigel Farage slammed Boris Johnson's decision to prorogue parliament as the "worst political decision ever" and called for the prime minister's adviser, Dominic Cummings, to be removed from his position.

The Brexit Party leader took to Twitter on Tuesday following the ruling by the UK Supreme Court against Johnson, ferociously demanding that Cummings, who led the Vote Leave campaign in 2016, "must go".

His frustration was echoed throughout the ranks of former Conservative MPs, with cabinet minister David Gauke saying "Strange times. I agree with Nigel."

​Former Home Secretary and now ex-Tory Amber Rudd also mirrored the sentiment, telling Sky News: “He is clearly not getting good advice. He will have to draw his own conclusions, but if I had been getting the kind of advice he has been getting, I would certainly be considering some people’s positions.”

This comes after a unanimous ruling by Britain's Supreme Court that Johnson unlawfully prorogued parliament and that the move is "void and of no effect".

Court President Lady Hale announced: "It is for parliament, and particularly the Speaker and the Lord Speaker, to decide what to do next". Her remarks were quickly followed by a recall of parliament for Wednesday 25 September by House of Commons speaker John Bercow.

The Farage statement criticising Johnson indicates a change in tune from the former's previous position in August in which he was firmly in support of prorogation and slammed attempts to appeal the decision in court as "remainer sabotage".

Endless Remainer sabotage, we really do need to be free. https://t.co/hOdZGfbyDF

​While hosting an LBC show, in a scathing rant against Labour Leader Jeremy Corbyn who labelled the suspension as unconstitutional, Farage said, "This all goes back to the rumour that Johnson would literally close down Parliament over the end of October to stop MPs having a say. What is happening here is nothing of the kind".

He added that a prorogation and a Queens speech would be "very normal in our system".

The radical shift in perspective was identified by Twitter users.

You are so full of shit 'mate'. You were DEFENDING prorogation 2 weeks ago!!!

​Supporters of Johnson also said that they disagreed with Farage for perpetuating divisions between the Conservative and Brexit Party.

Boris and Cummings are doing everything possible to ensure we leave on Oct 31. Unsure why Nigel is criticising that - considering we are all on the same team and want Brexit.

​Rumours of a pact between the Conservatives and the Brexit Party to ensure a no-deal government have circulated since the ascension of Johnson to prime minister in July.

The relationship between the two has been strained in recent weeks, however, with Farage warning Johnson that the Brexit Party would contest Tory seats if Johnson tries to put Theresa May's thrice defeated withdrawal agreement through parliament.

Cummings and Farage have historically had bad relations. The Vote Leave campaign chief has often been incredibly vocal about his dislike for Farage, who in turn accused Cummings of not being a “true believer” in Brexit in July.