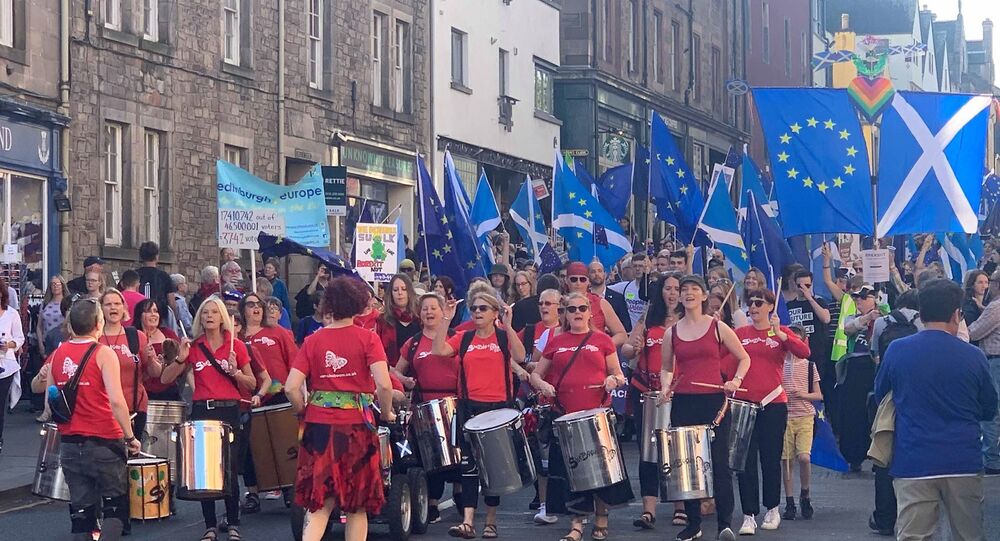 The European Movement for Scotland is an agitation organisation with the stated aims of promoting the benefits of EU membership in Scotland and to demonstrate that Scotland and the UK are overall European.

Thousands marched through the streets of Edinburgh on Saturday afternoon to demand that Scotland and the UK remain in the European Union.

Organised by the European Movement in Scotland, the crowd gathered at St Giles before marching down the Royal Mile toward the Scottish Parliament, creating a sea of blue as protesters waved the 12 stars of the European Union and the Scottish saltire to demonstrate their support for Scottish independence and opposition to Brexit.

Despite the strong turn-out in a city which voted 75% to remain in the EU, there was some opposition along the way. Some counter-protestors showed up to display placards reading that "More Scots Voted For Brexit Than the SNP".

The crowd ultimately coalesced for an event featuring a variety of cross-party speakers advocating for a second referendum on UK membership of the EU.

Joanna Cherry, who is currently at the forefront of a legal victory in the Scottish Supreme Court against the UK government in opposition to Boris Johnson's prorogation of Parliament, accused the PM of acting like a "dictator", but she was "cautiously optimistic that the United Kingdom’s Supreme Court will, like Scotland’s Supreme Court, find that the prorogation was unlawful and that Parliament will be returning to work soon".

She then called on anti-Brexit MPs to work "cross party" to achieve a "people's vote".

Labour's Ian Murray kicked off his speech by donning a Boris Johnson face mask, which was humorously met with a barrage of boo's.

He demanded that the United Kingdon be given "a final say referendum so that they can have their view on whether or not to remain in the European Union or back the prime minister’s deal".

He even praised Conservative MPs, including former Chancellor Philip Hammond and Father of the House Ken Clarke, for opposing Boris Johnson's government on Brexit, which saw 21 Tory MPs removed from the party.

Mr Cole-Hamilton echoed his party's newly adopted policy, saying that a potential Liberal Democrat government would "revoke Article 50 as the first thing that we do".

When asked how he believes the EU has brought about peace, he said that the economic operations and relationships between the countries mean that they're less likely to go to war.

Despite Scotland voting to remain in the EU by a 62% margin, the 2019 EU elections saw Scotland send a Brexit Party MEP to the European Parliament.

However, independence sentiment in the UK appears to be rising in both Scotland and Wales in response to the UKs withdrawal from the EU, which many feel they are being forced into against their will and see independence as a means to remain.

The event intentionally coincides with the United Nations International Day of Peace, for which many supporters of the EU credit the multinational bloc for helping bring about following wars in Europe, as it prevents the establishment of war machine economies.