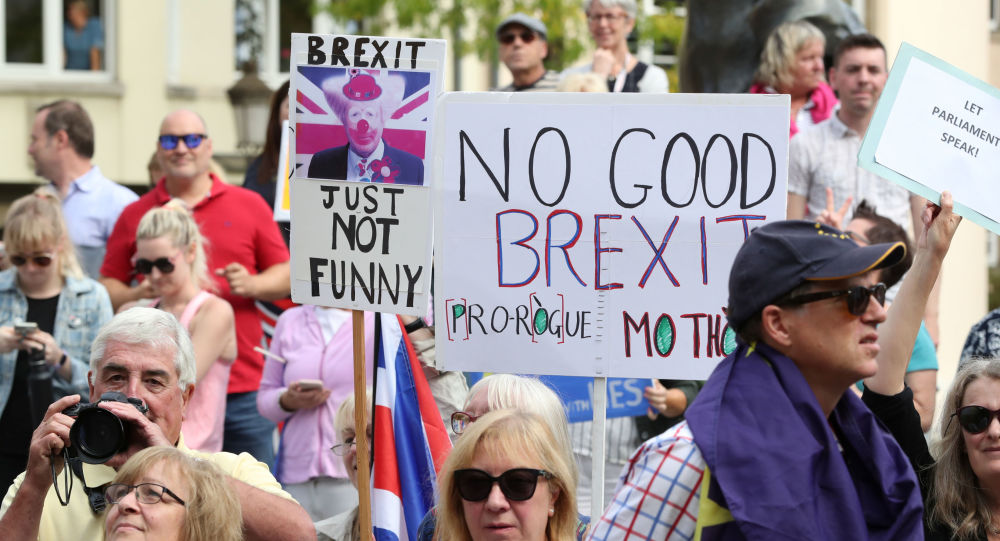 Boris Johnson’s meetings with Jean Claude Juncker and Xavier Bettel were interrupted by chants and heckles as the prime minister seeks to negotiate a new divorce deal with just six weeks to go until the Brexit deadline.

Britain’s Prime Minister Boris Johnson was jeered by the crowd when he left a luxury restaurant in Luxembourg after a working lunch with EU Commission President Juncker on Monday.

The hecklers were heard shouting “Go home Boris” and “Stop Brexit” while the two officials walked towards their cars.

Prime Minister Boris Johnson and EU Commission President Jean-Claude Juncker are greeted with boos as they emerge from a working lunch in Luxembourg to discuss #Brexit.

Following the lunch, the European Commission said in a statement that Juncker had pressed Johnson for “legally operational solutions” regarding the Irish backstop issue but that these proposals had yet to be seen.

A Downing Street spokesperson described the meeting as “constructive”, adding that Johnson had ruled out another Brexit delay and reiterated his wish to see the backstop removed from the withdrawal agreement.

Johnson is currently meeting with Luxembourg Prime Minister Xavier Bettel – and the boos were even louder as he arrived for the talks.

Boris Johnson turns up to meet Xavier Bettel to a very loud chorus of boos from the anti-Brexit protest just outside. pic.twitter.com/P0qJpeaCm8

Reports have emerged that Johnson will be skipping a planned joint press conference with Bettel for yet-unspecified reasons.

Taking Britain out of the European Union has been the recurrent theme of Boris Johnson's political career in the past three years. To deliver on his plans, he needs to get approval from lawmakers who have already voted down his predecessor Theresa May's withdrawal agreement three times because of the backstop issue, which they fear will keep Britain tied to the EU indefinitely.

The European Union insists that the backstop provision is crucial to their efforts to avoid physical checks or infrastructure on the border between Northern Ireland and the Republic of Ireland.

If the London-Brussels negotiations yield no results, Britain would have to leave the EU without a deal — a scenario lawmakers and businesses warn would damage the British economy, which would no longer have preferences in the EU market, and potentially disrupt medicine and food supplies.

Johnson has promised to leave the EU regardless of whether there is a deal in place by the 31 October Brexit deadline, and Parliament has passed a law forcing him to request a Brexit delay on 19 October in case of no-deal. The prime minister said he would ignore the law, and is likely to face a legal challenge from the opposition.