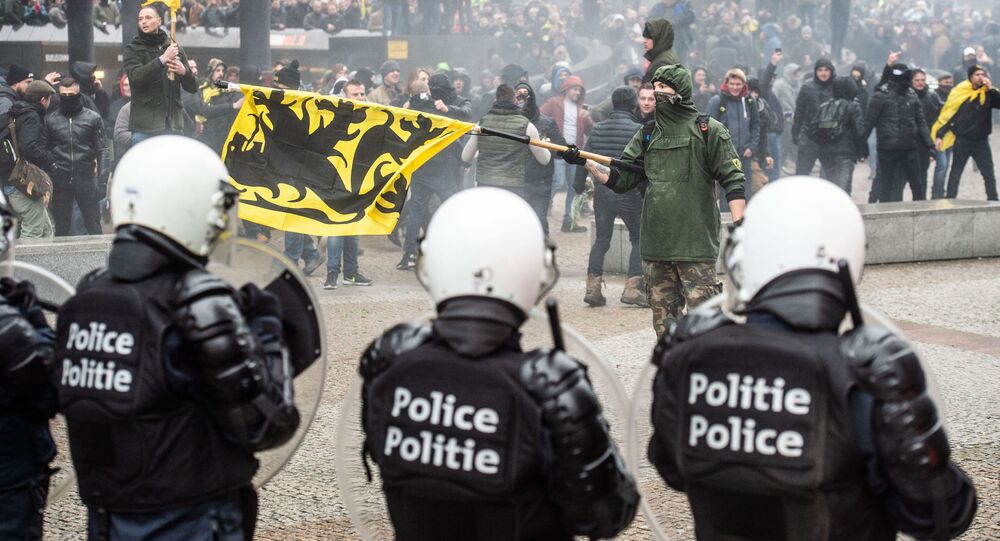 BRUSSELS (Sputnik) - Police in Brussels have prevented Flemish nationalist radicals from holding an unauthorized rally in the centre of the city.

About 10 protesters gathered in the centre of Brussels on Sunday. They were encircled by police forces. Several people were detained.

The police mobilized an equestrian patrol, several special forces minibuses and officers with police dogs to secure the scene.

Earlier in the week, one of the Flemish nationalist groups said it was planning to hold a "March on Brussels" on Sunday, but the authorities banned the event to prevent unrest.

© AFP 2020 / JONAS ROOSENS
Demonstrators clash with Belgian riot police during a march in Brussels on December 16, 2018 called by the right-wing Flemish party Vlaams Belang and a dozen of organisations against the UN Marrakech global compact on migration

According to the Brussels Times, counter-demonstrations organised by left-wing and anti-fascist groups were also banned, in line with police recommendations. Last year, a demonstration against a UN Pact on Migration called "March against Morocco" was allowed by Belgium's Council of State and saw violent clashes between protesters and police.