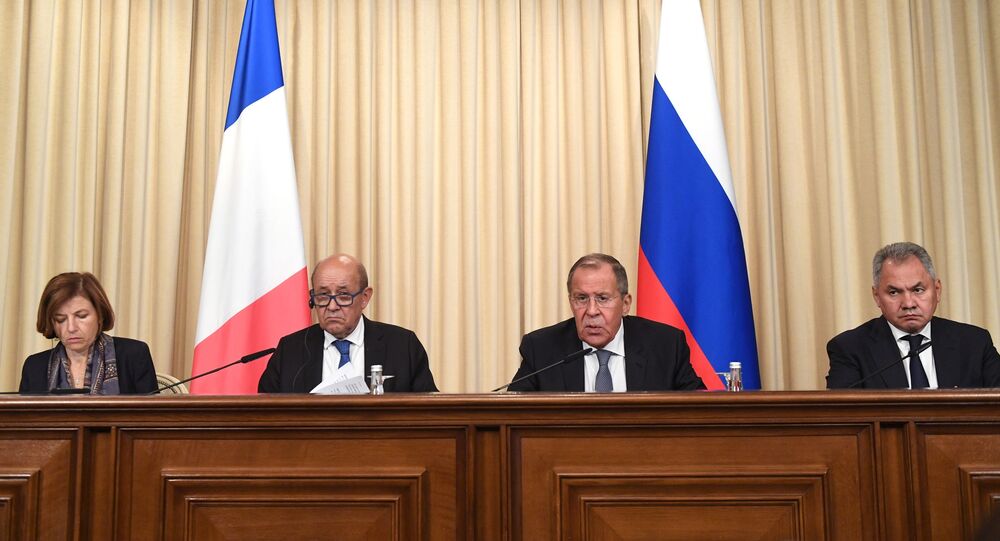 MOSCOW (Sputnik) - Europe cannot be stable or secure if it does not have clarity in its relations with Russia, French Foreign Minister Jean-Yves Le Drian said Monday.

"We need to act together toward progressive restoration of strategic stability in Europe in order to lay ground for this new architecture of trust and security, as the European continent will never be stable, will never be secure if there is not utmost clarity in relations with Russia," Le Drian said at a joint press conference with Russian Foreign Minister Sergey Lavrov.

On Fight Against Terrorism in Syria

"We agreed to continue work on a coordinated rebuff to terrorists who still remain on Syrian territory, on solving humanitarian problems - facilitating the return of refugees and starting the political process through the formation of a constitutional committee," he told reporters.

On Settlement of Ukrainian Crisis

The Russian foreign minister expressed hope that Russia-Ukraine relations will improve along with the Donbass settlement.

“We all expressed satisfaction with the 35-for-35 exchange that took place the day before yesterday, this event was widely covered by the media, it was welcomed by all our and Ukrainian partners without exception. We hope that this is a good sign that allows us to count on the fact that in parallel with the settlement in Donbas, Russia-Ukraine relations will be normalizing," Lavrov said at the 12th meeting of the Russian-French Security Cooperation Council in the "2 + 2" format in Moscow.

According to Lavrov, Ukrainian President Volodymyr Zelenskyy's statement on the need to work to disengage troops in Donbass is positive.

"We noted, on the Russian side, as very positive the statement by President Zelenskyy that he is interested in resolving, through working in the Normandy format and Contact Group, issues of disengagement of forces and means on the contact line, starting from areas agreed three years ago by the Normandy format leaders, and then throughout this contact line," Lavrov said at a press conference following a meeting of the Russian and French top diplomats.

He said that fully met the expectations of all those interested in the full implementation of the Minsk agreements.

"And we certainly expressed the hope that such a position of the Ukrainian president would continue to determine that country's policy towards a settlement in Donbas," Lavrov said.

His French counterpart in his turn said that France would like to have a new highest-level meeting in Normandy Four format in Paris in the coming days.

"We would like for a new highest level meeting of the Normandy Format to be organized in Paris in the coming days," Le Drian said at a joint press conference with Russian Foreign Minister Sergei Lavrov.

In the most recent development of the situation, Russia and Ukraine have agreed to release 35 detained and convicted persons each.